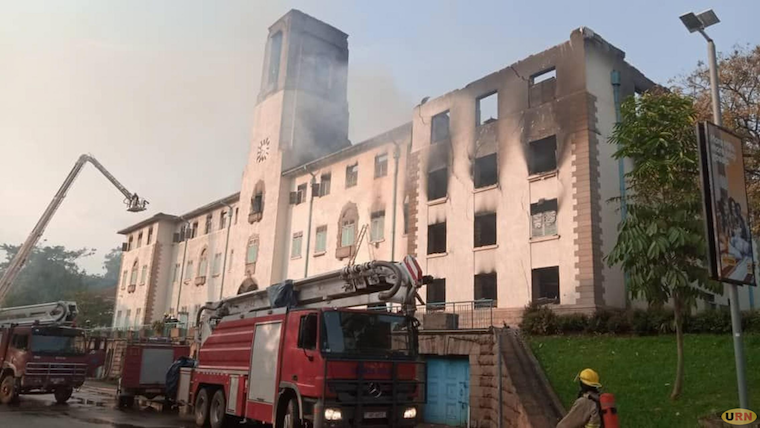 The right-wing of the iconic Ivory Tower also known as the Makerere University Main Building has burnt to ashes from a fire that started early Sunday morning.

The fire is believed to have broken out between 12:00 am and 1:00 am at the right-wing before it spread to other parts of the university.

The 79-year-old  building is the face of the university that has appeared on postage stamps, postcards, advertising boards, academic journals and national currency over the years. At the moment, the damage caused by the fire remains unknown but a quick assessment of the building shows that the entire roof of the right-wing has collapsed.

One of the firemen present at the university says that nothing is left within the burnt wing. The entire finance department has been gutted. He adds that the entire wing is expected to collapse given the huge cracks that have presented in the walls due to the fire.

According to university staff, only a few offices remain untouched by the fire. They include the printery, the vice chancellor's office, senior common room and the council room. The cause of the fire and whether anyone might have been inside the building is still unknown. However, security believe no one was inside the building.

Lucy Alezuyo, a guard at the university for the last 23 years, says that at the weekend the building is mostly deserted. Few people are in it working.

"According to protocol, those on duty must move around to ensure that no one is inside before they lock the entire building. This is usually done at around 5:00 pm during these curfew times," said Alezuyo.

"It is a very dark morning for Makerere University. Our iconic main administration building caught fire and the destruction is unbelievable. But we are determined to restore the building to its historic state in the shortest time possible," he said.

But surely why spend all the billions and fortification of a one man rule and not spend a cent on very essential fire fighting equipment?

Why ensure the "one man rule" that serves no purpose to the people, especially not to the young?

Ugandans act as if Museveni is going for second 5 year term!

But Ugandans ensure their tribalism through the tribalistic system, yet deny it, even when it's the reason Museveni will rule for life!

Burnt to hide the many unqualified politicians in the high places at the time when Ugandans are demanding acade mic papers from m7 and his family of thugs!

But the country belongs to them & they are not answerable to anyone!

But once UNITY shows them way out, Ugandans will have their country back & will then render the heartless family answerable for miseries, destructions they caused!

Getting the country back in UNITY, comes FIRST or Museveni will die of old age at +90 years still ruling & his family business will go on!

What will bringing down the tribalistic system & UNITY cost Ugandans, other than ending Museveni & family quest of ownership of Uganda?

Why don't Ugandans want to be FREE to form the kind of governance they want?
Report to administrator
0 #13 Lakwena 2020-09-22 10:45
The debacle of the Main Building is a reminder of the controversy over the January 2020 Graduation Gowns being imported from China.

In other words, the Daily Monitor Cartoonist cynically depicted the Main Building, complete with typical characteristics of Chinese Architecture (made in China).

How sure are Ugandans that the contract to restore the Main Building will not be handed over to a Chinese Company?

In other words, if our State House at Entebbe, the President's Office and Foreign Affairs Office were built presto, by the Chinese, what is so difficult about Chinese rebuilding th Main building.

In other words, China/Russia (Communists) are here to deface, humiliate and obliterate the Brits' legacy. E.g., the Queen's Clock Tower is now gone, as there is agitation to change all Kampala streets and/or roads names after some Brits.
Report to administrator
12