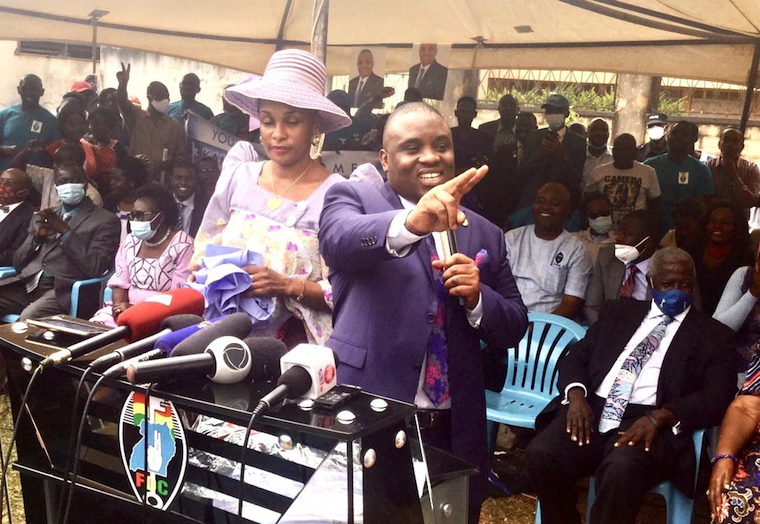 In the Forum for Democratic Change (FDC), Kampala Lord Mayor Erias Lukwago says he's finally joined a party that he finds comfort in, whose multifacet approach to fighting bad governance, equality and restoration of rule of law he believes in.

Lukwago officially crossed from the Democratic Party (DP) where he has been a life member since 2004 to FDC on Tuesday, July 28 at the FDC headquarters in Najjanankumbi. Although he has been allied to FDC and particularly to former FDC presidential candidate, Kizza Besigye's 'People's Government' where he is deputy president, Lukwago had never officially denounced his former party.

Lukwago said the time had come to follow his heart and go to primarily cement the bond with a team of patriotic, charismatic leaders who have over the years championed been in the struggle to create political sanity in Uganda to build a free prosperous and just society.

He said he has not joined FDC for self-aggrandisement, material gain and is not scheming for any position but rather wants to join the vibrant forces in FDC that want to fight for change in the country in the shortest time possible.

”I’m not here for self-aggrandizement, I want to stress that. My decision has not been informed by desire to come here for anything material. No. I know for sure that the vast majority of you and other right-thinking members of this country will attest to the fact that I have no centra or iota of political scheming within my DNA. You know that. Anyone can get the bible, can get the quern and testify to that fact." Lukwago said to the cheering FDC leadership and supporters including party president Patrick Oboi Amuriat, chairman Wasswa Birigwa, secretary general Nathan Nandala Mafabi, Reagan Okumu, MP Cecilia Ogwal, former MP Ken Lukyamuzi, Kampala deputy mayor Doreen Nyanjura, several KCCA councillors among others.

"I have not come to FDC as a fortune hunter looking for freebies, groceries or what in political parlance is known as a meal card…Personally I abhor the culture of meal card politics which is quite pervasive in our party politics. With all due respect to whoever might be offended by my remarks, I always cringe at the sight of a political leader roaming around with a party ticket as an ATM card and such elements shouldn’t be tolerated by any serious political party." Lukwago added.

Lukwago further said that he finds the FDC a step ahead of the rest in how it had built inter-party democracy over the years, where all positions in the party are contested for fairly by all members no matter the seniority or age in the party. He also said he believes in the party's philosophy of defiance in subduing the gun culture, which he says is the cause of all Uganda's current problems.

Norbert Mao, the president of Lukwago's former party said it was good that Lukwago had finally formalised his relationship with FDC because he had already been out of his marriage with DP. Mao said it was clear for all to see that Lukwago was spending more time at Najjankumbi than at his own party. Lukwago claimed for all the years he has been Kampala mayor, his own party has never embraced or endorsed him.

FDC president Amuriat presented Lukwago with FDC membership card number 616417, FDC policy agenda dubbed; Uganda leaping forward, the party constitution. He urged him to read the documents and be able to promote the party whenever the opportunity arises. He was also handed a blue FDC t-shirt and told to discard his former green shirts from DP.

Lukwago called for more alliances with other players and synergies to advance the struggle, saying FDC can't do it alone. On his part, Besigye said he has never come across a more resilient and resolute 'fighter' than Lukwago who is ready to go into the trenches to take on the dictatorship.

”We’re not fighting for any change. We’re united in fighting for particular change of ending gun rule and ushering in people rule. The people must be in charge of this country. So the struggle we’re in, is not a struggle to change leaders from Museveni to Besigye.. to change from domination of a few people to qualitative change...The current mission for Uganda is not a mission to change the leader, mission to remove from old to young, from one side to another. To get freedom, we must fight for it," said Besigye.

Besigye said it is the duty of every Ugandan to turn into a fighter and that doesn't necessarily take away their voting rights. He said every fighter is a voter but not every voter is a fighter. He said when people turn into fighters of freedom, even the regime fears to further abuse them as evidenced in Rwenzururu region where their votes can't be stolen like in other regions.

Besigye also reiterated calls to work together with other political players in the country and said if the people of Uganda want to change leadership, they don't even have to wait for 2021 to do under what he called sham elections.

"In liberation, we must work together. Those fighting for Uganda, let us work together and end the game as quickly as possible. Once we set our eyes on the ball we shall not fail to identify who has the ball...Is there anybody who invited me into the fight? Everybody is invited into the fight by their own conscience…Me, who brought myself, I will fight until the job is done or I die. When I say that some people panic…Some people think fighting a dictator is a luxury that I enjoy. It is not a luxury. Try it for a few years then you will know...Liberation is not far, don’t condition minds according to 2021. Why can’t Ugandans not liberate their country before 2021…This country can be liberated at any stage."

Besigye said there's need to fight the domination of one family against the rest of Ugandans. He mentioned President Yoweri Museveni, whose wife Janet Museveni is the minister of Education and Sports, his brother Salim Saleh as the in-charge of the country's wealth, son Muhoozi Kainerugaba in charge of the army, in-law Sam Kutesa in charge of Uganda's assets.

Its not easy to catch me off guard , I am always alert and mindful of what is happening.

No , I did say , imply or think that Mukulu Lukwago is after cash. I know that he is not money-minded.

I am saying that if he brings up the subject of scheming , self .aggranidisation etc , he opens up the door for others to cross-examine him based on his record.
Quote | Report to administrator
12
Refresh comments list
RSS feed for comments to this post
Add comment