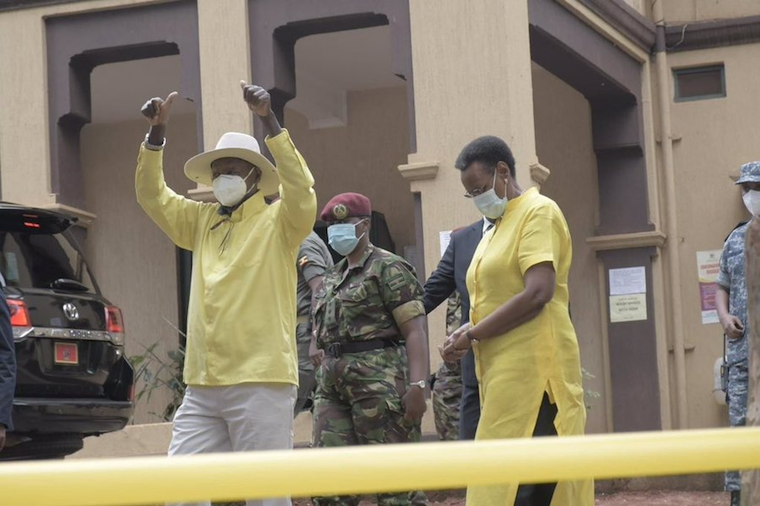 President Yoweri Museveni and wife Janet Museveni after his nomination

President Yoweri Kaguta Museveni is the sole uncontested nominee for the position of ruling National Resistance Movement (NRM) chairperson and the party's presidential candidate in the 2021 elections.

Museveni was today nominated by the Prime Minister Dr Ruhakana Rugunda for the position of party chairman and seconded by Gaddafi Nasur, the chairperson of the NRM Youth League and Amina Lukanga Nanziri, a resident of Makindye in Kampala and Hellen Seku, a resident of Kamuli in Kira Municipality.

NRM Electoral Commission chairperson Dr Tanga Odoi said so far is there is no challenger against Museveni as none of his rivals have returned nomination forms for both offices. He explained that as the party Electoral Commission, they are satisfied with the candidature of Museveni and without a doubt, he’s the best person to lead Uganda.

"We as Electoral Commission are satisfied that we have done a thorough job because we don’t have any doubt that we have the best candidate for the party of NRM. We, therefore, hand over the candidate Yoweri Kaguta Museveni to the secretariat…The country Uganda doesn’t have shortage of trees growing, it doesn’t have a problem of grass growing. Since 1962 it has had a problem of leadership, I can write books, thesis on that," Tanga said.

Odoi also dismissed claims that they have frustrated attempts by other party members to challenge Museveni. He said as the NRM Electoral Commission, for as long as a member has fulfilled the conditions set by the central executive committee (CEC) of the party, they don’t have any problem nominating anybody else.

Last week, the former Makindye East MP John Ssimbwa picked nomination papers to challenge Museveni for the position of NRM party chairperson. He, however, failed to return the nomination forms and accused Odoi of failing to avail him with the guidelines that were to be followed.

Ssimbwa said the commission was working very hard to frustrate anybody from contesting against Museveni, who CEC had already endorsed as sole candidate. NRM deputy secretary general Richard Todwong said Museveni’s leadership hasn’t only been a blessing to the party, but also the country. He thanked Museveni for accepting to be the party chairman and flag-bearer when they called upon him.

"On behalf of the party, we need to thank you [Museveni] so so much for accepting the call of the organization to continue leading them in the struggle for liberation. The journey you started to build this massive organization that has seen Uganda over the years, is a journey that we can’t just wish away. Your stewardship, your skills, your knowledge, your in-depth knowledge of organizational governance in politics is still very much needed in this organization. And so we thank you," said Todwong.

Todwong called upon candidates for various positions to exercise maximum decorum and respect for those they are contesting with, saying the NRM is built on firm principles of respect and discipline.

“We have read through the press and witnessed how many political organizations are crumbling and collapsing simply because of internal intolerance. But we are grateful that the membership of NRM is a little more purified, ideologically firm and matured,” Todwong said.

For his part, Museveni said his focus in his sixth elective term as president, will be on steering the country towards fighting the coronavirus disease, income inequality, regional trade and the East African federation. If elected in January 2021, Museveni will have led Uganda collectively for 40 years.

How much money are we in debt???? Those stupid roads you are talking about are all loans from China and the world bank. Museveni killed people in the 80s and blamed it on anyanyas just like he did with kony.
Report to administrator
0 #12 Lakwena 2020-07-30 10:24
Quoting Mbeho Achuc:

The GDP has grown, more electricity,roads... your main problem is him as a person?? When he deals a blow on corrupt dogs and thieves when he blew lions, he should be thanked...

But Mbeho Achuc, where were you during the funeral of Prof. Adonia Tiberondwain in Bushenyi; when Gen Otafiire told mourners point blank that: while in the Luweero bushes, they used to put on UPC T-shirts and terrorize the people and the following day return in their NRA rags to console them.

And because Mr. M7 who was Minister of Defense had stolen the UNLA uniforms and guns, they would likewise use it to commit atrocity. And the following day go back to their rags and go to console their own victims whom they now blamed on Obote/UNLA.
Report to administrator
0 #13 Lakwena 2020-07-30 10:41
Just like he sent Gen Peter Elwelu to massacre the people of Kasese in 2016, just because they are not bending to his dictatorship; where were you when Mr. M7 sent his Banyarwanda NRA mercenaries, commanded by Fred Rwigema to massacre the people of Acholi, Lango and Teso Sub-region?

They didn't only massacre them, but also urinated and defecated in their drinking and cooking pots. After practicing genocide of our people, Rwigyema was haunted such that he had to go back to Rwanda by force and the genocide continued.

Where were you when Mr. M7 thru Gen Tinyejusa executed a scotch-earth policy/operation in Acholi Sub-region?

Among others: burnt their crops and houses, blacked out the media and confine the people in Concentration camps (IDP) for 20 years, where in average, 1,000 children died per week.

In other words Mbeho Achuc, all these are your progress for the people of Acholi, Lango and Teso Regions (1986-2005).
Report to administrator
+1 #14 Lakwena 2020-07-30 10:51
Mbeho Acut (vulture), can't you see how black Mr. M7's hands are? it is because they are caked black with the blood of thousands of innocent Ugandans.