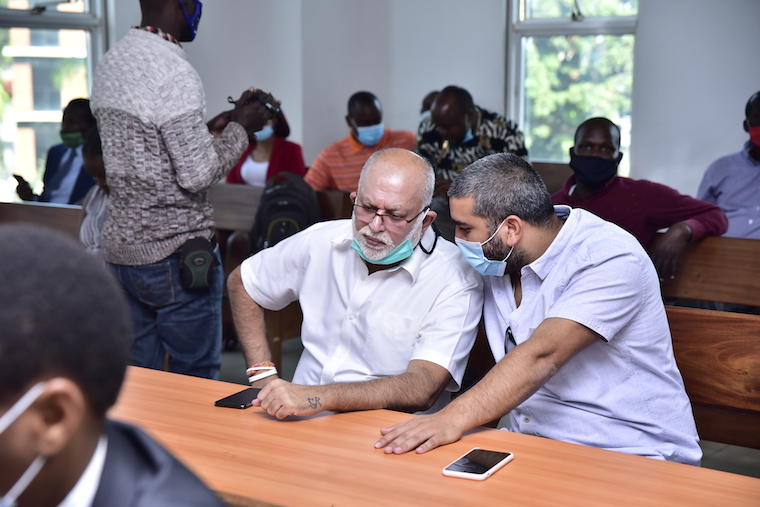 Sudhir Ruparelia and his son Ranjiv in court

The protracted legal battle between Bank of Uganda (BOU) and Sudhir Ruparelia took a different turn when both sides bought space in the media to clear the air ahead of a Supreme court hearing in the case filed by Crane Bank Limited (in Receivership) versus Sudhir Ruparelia and Meera Investments Limited.

As DERRICK KIYONGA writes, both sides are leaving no stone unturned in a bid to win over the public narrative much as the case is still in court.

On June 23 when the Court of Appeal quashed an appeal by BOU, the institution immediately issued a notice that it would appeal the decision to the Supreme court. BOU’s application seeks a refund of Shs 397 billion from Sudhir which he allegedly pulled out from Crane bank before it was dissolved in October, 2016.

But last week, the central bank took an unprecedented move by going to the print media to detail the genesis of the case, why it lost in the Court of Appeal, and the reasons for the final appeal in the Supreme court.

Thereafter, Sudhir, through his lawyers of Kampala Associated Advocates (KAA), rebutted BOU’s assertions the following day. Ordinarily, parties always seek to argue legal matters in court, preferring minimal coverage in the media due to the sub judice rule, which prohibits public discussion of matters before court.

However, BOU found it prudent to use the timeframe before officially lodging the final appeal to raise the matter publicly for the first time.

“An inventory by external auditors found that the assets of Crane bank were significantly less than its liabilities. In order to protect the financial system and prevent loss to the depositors of Crane bank, BOU had to spend public funds to pay Crane bank’s depositors,” reads the statement by BOU governor Emmanuel Tumusiime-Mutebile on June 30.

“A subsequent forensic investigation as to why Crane bank became insolvent found a number of wrongful and irregular activities linked to Sudhir Ruparelia and Meera Investments Ltd. These findings form the basis of the claims in the lawsuit by Crane bank. The suit was necessary for recovery of the taxpayers’ money used to pay depositors’ funds as well as the other liabilities of Crane bank.”

BOU further explains the reasons for losing the case on grounds that both the High court and Court of Appeal ruled that Crane bank had no capacity to sue them while in receivership and that upon transfer of some of its assets to DFCU Bank, Crane bank ceased to exist.

According to a senior counsel, who preferred anonymity because he has previously represented both parties in different capacities, the statement shows BOU is reaching out to the public.

“It wants to show that it is the taxpayers’ money, the Shs 397bn, that stands to be lost while also maintaining that courts decided the matter on technicalities, and not on its merits,” he says. “I think BOU has realised it may not win in the Supreme court; so, it is pitting the public on its side.”

In Sudhir’s rebuttal, KAA notes that court determined that the case was not legally tenable as there was no cause of action. However, KAA goes ahead to challenge nearly every word in the BOU’s statement.

“Bank of Uganda makes a false allegation that taxpayers’ money was used to settle Crane bank depositors. This statement is used several times in the press statement but it is not part of the case Bank of Uganda filed. It is an allegation designed to sway public opinion, and has nothing to do with the case,” reads the KAA statement.

“Parliament of Uganda (Cosase committee) have all reported that there was no evidence to support Bank of Uganda’s claims that taxpayers’ money was allegedly spent on paying depositors. Money went missing from Bank of Uganda and remains unaccounted for.”

The revelations don’t end there. BOU claims a deal had been reached with Sudhir on March 20, 2017 to pay back $60m in a Settlement and Release Agreement before he allegedly breached the arrangement and that it was on this basis that BOU sought legal redress.

“Under this agreement, Sudhir only paid $8m and regrettably later refused to comply with his undertakings,” reads Mutebile’s statement.

However, KAA insists the case BOU filed in both courts did not include any claims of any kind or any allegations of any kind in relation to a settlement agreement with Sudhir.

“Because Dr Ruparelia has filed a counter claim, whose subject matter is based on that settlement agreement, the sub judice rule precludes him from elaborating more on that matter here,” reads the statement.

According to Isaac Ssemakadde, an advocate of the High court, this seesaw turn of events by both parties is intended to win over the court of public opinion.

“It is clear BOU is not ready to go down without a fight, especially when it knows it owes the public a duty. BOU is suffering from a crisis of confidence, having lost at two levels of the court system, and before Cosase in relation to the same matter. Now they are engaged in a game of dangerous brinkmanship with a financier who takes his reputation seriously.,” he says.

“Clearly, BoU has never been subjected to such scrutiny. It is doing all this to protect its reputation regardless of whether it is legally outsmarted by Sudhir.”

Meanwhile, the senior counsel also notes that both sides are still keeping their cards to the chest. “Reading BOU’s statement, KAA should have sued for defamation and the fact they also brought their own version means it is very risky to challenge the BOU allegations.”

In all, this exchange finely sets up the final battle in the Supreme court in a few weeks from now.

0 #1 WADADA rogers 2020-07-08 09:52
I was so shocked to hear that Bank of Uganda is appealing, how can you appeal a decision that is clearly telling you that you cannot hide under a law and then use the same law to uncover others.

BOU will not succeed
Report to administrator