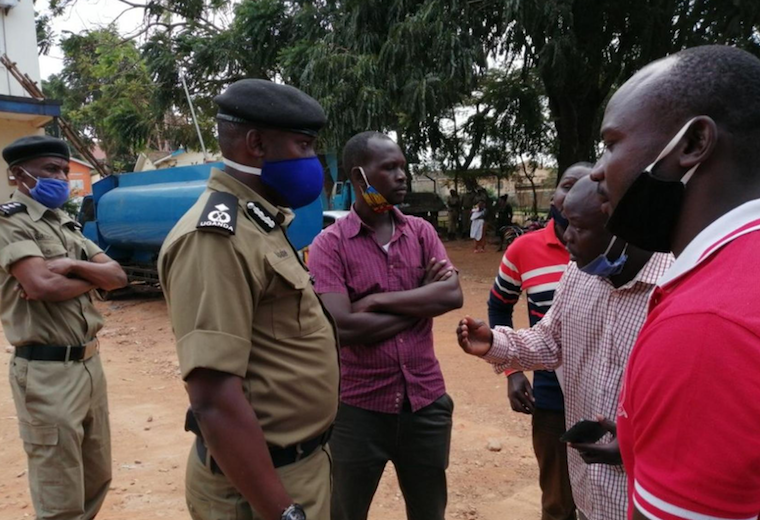 A boda boda cyclist has torched himself to death inside Masaka central police station in protest over his impounded motorbike.

Hussein Walugembe, who has been operating a motorcycle taxi from around Buddu Shell fuel pump station stage, reportedly doused his body with petrol he had carried in a mineral water bottle concealed in his jacket before he set himself ablaze.

According to preliminary information, Walugembe had gone to the police station to follow up on his motorcycle registration number UEF 145L that was impounded on Monday over flouting curfew guidelines.

Walugembe’s friend, Agnes Namubiru says the deceased told her that police had asked him for Shs 100,000 to release his motorcycle but he couldn’t raise the money. She says that Walugembe committed suicide after going to the police station on Thursday morning to seek help from a traffic officer to help him recover his motorcycle in vain.

The death of Walugembe prompted his colleagues to storm Masaka police station protesting what they called persistent persecution by security authorities. Hussein Ssenabulya, the chairperson Masaka Boda Boda Rider Association, says they are saddened by their colleague's actions, which he blames on police harassment.

Ssenabulya says that they want police to prosecute the police officer that was handling their colleagues’ file because he is fond of extorting money from people.

Enock Ambaine, the Southern Region police commander, says that he has instructed the Professional Standards Unit to open a general inquiry file to investigate the matter if there was a case on unprofessionalism on the side of the police.

Ambaine adds they are also going to investigate allegations that the officer who was handling Walugembe's matter had asked for Shs 100,000 because the receipts that were cleared to be given to cyclists operating during curfew hours is Shs 40,000.
The deceased’s body has been taken to Masaka regional referral hospital mortuary for postmortem.

M7 clan deserves the gas chamber
and to go hell. Enough of these rotten thieves
Report to administrator
12