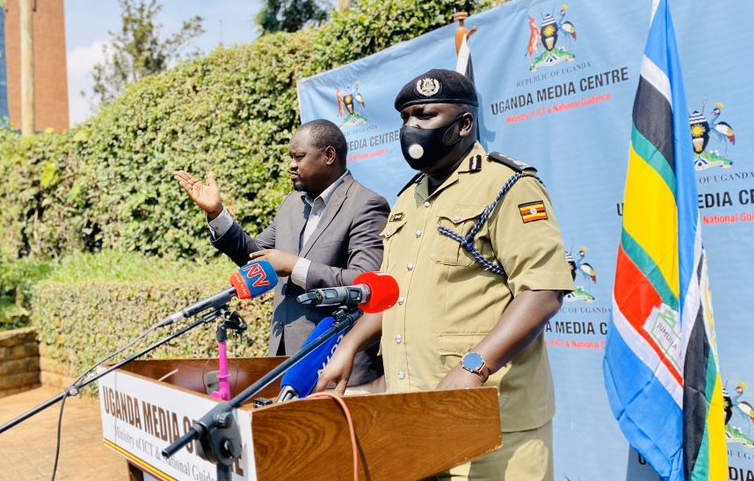 Police have advised owners of motor vehicles that are kept in open-air parking spaces to remove number plates before going to sleep to avoid them being stolen.

Normally when thieves steal the number plates, they leave a note on the cars with a telephone number and instructions to the owner to deposit a given amount of money usually over Shs 100,000 if they want to repossess them.

Speaking to reporters at the Uganda Media Centre in Kampala today during the tri-weekly security briefing, Fred Enanga, the police spokesperson said this is the only way to foil the practice that is gaining moment in recent days. Enanga said although it might be cumbersome, it's better than going through the process of replacing them when stolen.

"On the issue of number plates, we’re not saying remove the number plate and put it on another vehicle, it is meant for that car. If you can have it detached and then fixed that is one area especially if you don’t have a garage and you have an open-air compound. Because they easily jump in and sometimes you can’t come out because you’re not sure of your safety and security. So this is one method which we’re asking those who can to get to adopt." said Enanga.

Enanga’s advice follows the recovery of 11 number plates that were stolen from different parts of Kitende village in Kajjansi town council Wakiso district by a one Felix Mwebesa, who is suspected to be part of a criminal gang involved in the theft of car number plates.

Mwebesa is currently detained at Kajjansi police station as investigations into the matter continue. Enanga called upon all the owners of those cars whose number plates were stolen to go to Kajjansi police station to claim them. Some of the numbers recovered include UAN 852B, UBF 211J, UBF 603Q, UBA 6250, UAV 379X, UBA 984K, UBC 577D, UAK 401H, UAU 223L and UAU 767J.

Meanwhile, police revealed that last week they arrested 170 people for violating different directives on the coronavirus (COVID-19). 18 vehicles and 101 motorcycles were impounded after their owners were found moving past curfew hours or carrying passengers contrary to exiting guidelines.

“The public continues to flout government directives put in place to curb the spread of Coronavirus. This is partly due to ignorance of the fatality of the pandemic,” said Enanga.

Audio: Police spokesperson Fred Enanga urging Ugandan motorists to pluck off their number plates every night so as to protect them from thieves #crime #criminality #Uganda pic.twitter.com/zKxOVhKNHw

ake a number plate lose its current value. I'm sure the government can subsidize because Uganda is very rich and lots of her money is in people's homes under the bed. That's a win situation.
Report to administrator
+2 #2 WADADA rogers 2020-06-22 23:00
i hope Enanga is aware that it is or it can be a crime to be found loitering around with car number plates
Report to administrator
+3 #3 Kabaseke 2020-06-22 23:02
Quoting Larry james:

Here is a simple solution. You don't have to be a genius. Make the process of replacing a number plate cheaper and less cumbersome. M

ake a number plate lose its current value. I'm sure the government can subsidize because Uganda is very rich and lots of her money is in people's homes under the bed. That's a win situation.

And then criminals will have a field day using the stolen number plates on other vehicles!

Government registered all sim cards. Why doesn't the police apprehend these criminals, tracking them on the phone numbers they leave behind?

I wouldn't be surprised if our crime infested police could be in cahoots with these petty criminals!
Report to administrator
+5 #4 kabayekka 2020-06-23 07:58
Old time officialdom with a touch of colonial mentality is the cause of loss of car number plates.

In most countries, the owner of a motorvehicle walks into a hardware shop with the required documentation. And after only about 10 minutes, new number plates are issed.

And these are countries that make new cars every other day. Unlike Uganda that imprts secondhand scrape cars.
Report to administrator
+5 #5 Apollo Ekelot 2020-06-23 13:28
Looks like surrendering to criminals. The police in Uganda can nip this crime but they want an easy way.

People who leave a phone number behind can be nabbed by the police if they so wished. Not quite sure; maybe the police know them and for some fiduciary reason they do not want to catch them!
Report to administrator
+1 #6 Bwire Patrick 2020-06-23 16:56
From what Enaga says, it leaves one with no choice but to reach a conclusion that this is one of the sources of police daily bread.

With registered SIMs what is Enaga talking about.
Report to administrator
0 #7 Odongkara 2020-06-24 07:38
Do the police in this country have any work to do other than take bribes and make crime a lucrative business?

What a stupid impractical solution from well fed and lazy Enaga!
Report to administrator
0 #8 Edmund Nviiri 2020-06-24 09:47
If my vehicle is stolen at night without the number plate what will be the easiest way for police even the public to help me recover my car because in most cases we announce a stolen car and sometimes easily recovered basing on the number plate.

Are we not over simplifying car theft
Report to administrator