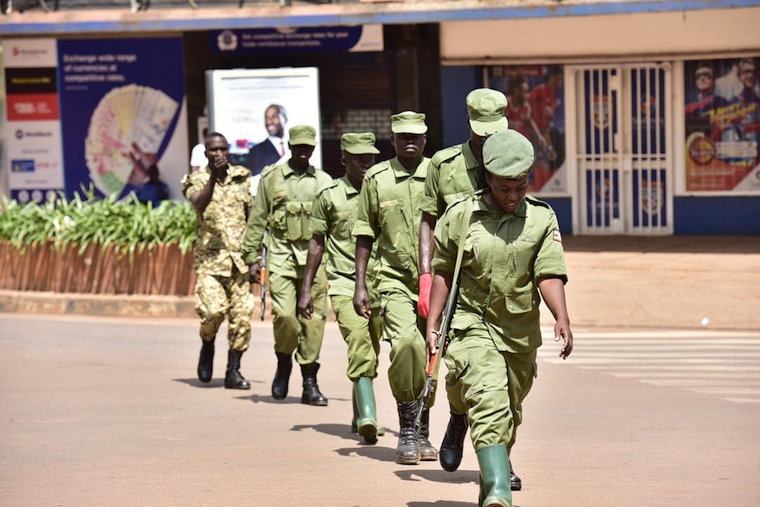 Ugandan security agencies have directly led to the death of at least 6 people in the last 75 days while implementing COVID-19 guidelines.
The victims were killed by soldiers of the Uganda People’s Defence Forces (UPDF), Uganda Police Force and Local Defence Unit (LDU) who were enforcing orders intended to curb the spread of the contagious diseases.

The killed include Margret Nanyunja, 80, who died after LDU personnel raided her home in Kyengera town council along Masaka road in Wakiso district on April 10. LDU personnel allegedly ransacked Nanyunja’s home, claiming that her grandson Andrew Mbazira had defied COVID-19 curfew orders. Mbazira later told journalists that LDU personnel raided their home at around 1 am and beat up her grandmother when she asked them for a search warrant.

“When we opened the house, our eyes landed on security personnel. They forcefully entered. My grandmother was in the sofa set and she quickly questioned them why they had come in wee hours of the night,” Mbazira said.

Wilber Kawono, a resident of Budaka district was shot by police on April 18. Budaka district police commander Shadia Nabunya told journalists that Kawono had carried a passenger on a boda boda which was against President Yoweri Museveni’s ban on public transport.
Nabunya said Kawono disobeyed an order to stop, prompting a policeman to aim at the motorcycle tyre but he accidentally shot directly at Kawono causing his death.

Evelyn Namulondo, a resident of Budhumbuli, in Jinja town, was shot in the stomach by security personnel in camouflage when she was going to purchase her food stall merchandise on a motorcycle. It was at around 5 am, and she later succumbed to bullet wounds at Jinja hospital.

James Wako, a chappati snack seller in Jinja said he heard gunshots and only realised that someone had been shot after seeing Namulondo groaning in pain. While in the hospital before her death, Namulondo said she spent some minutes seeking to be evacuated to a hospital in vain. Nevertheless, a boda-boda cyclist rode her to Jinja hospital where she died three days later.

Charles Sanga, a businessman also died after he was allegedly clobbered by soldiers and policemen led by the interdicted Jinja resident district commissioner Erick Sakwa on accusations of defying the president's lockdown orders. The RDC was arrested and charged with manslaughter. The case regarding Sanga’s death is currently in court.

Vincent Serungi, a resident of Wakiso town council was also shot and killed on March 31 on accusations that he was riding a motorcycle against the president's orders. Kampala Metropolitan Police spokesperson, Patrick Onyango said Serungi’s suspected killer Constable Stephen Wafula was arrested and charged with murder in Mukono court.

The UPDF First Division spokesperson Maj Yusuf Katamba said UPDF had taken the necessary action to penalize all those that have beaten civilians during the lockdown. According to Katamba, seven soldiers have been found guilty of beating Ugandans by a division court martial led by Col Sam Mugyenyi in Kakiri, Wakiso district.

Besides those that have died, there many others who are still nursing bullet wounds. Shadia Kauda, a resident of Kiwanga, Goma Division, in Mukono district was shot in the thigh by police while chasing after youths they accused of disobeying Covid19 orders.

Alex Oryema and Kasim Ssebudde were shot at Misindye, Goma Division, in Mukono municipality. The duo was shot on March 27 while heading to a construction site on their own motorcycle with a bag of building implements.

Of course they didn't know that M7 is a well organized ruthless and brutal criminal. They sacrificed their lives in good faith for us to have a fundamental change.

Fellow Ugandans, can we sacrifice and go under lockdown and demand that we shall stay in it until M7, his family/relatives are out? Is that to much to ask?

I mean, we can't demonstrate like the Americans, can't walk to work, can't defy that M7 is not a legitimate president because we are to scared of M7!