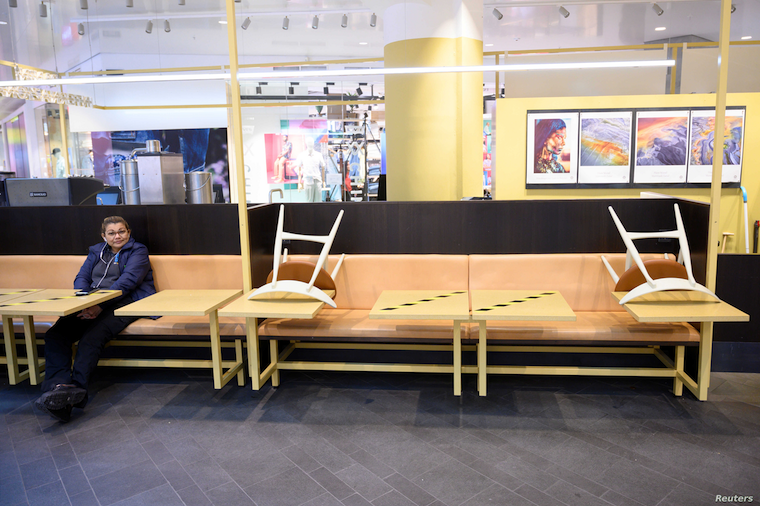 A woman sits respecting social distancing at the Gallerian shopping center, as the spread of the coronavirus disease continues, in Stockholm, Sweden

Swedish Prime Minister Stefan Lofven defended his country's strategy in fighting the spread of COVID-19, pushing back on the notion Sweden has taken a "business as usual" attitude toward the pandemic.

Speaking to foreign correspondents Friday in the capital, Stockholm, Lofven insisted life is not carrying on as normal in Sweden, as he said its international reputation would suggest.

Other European nations have expressed concern about Sweden's relatively "soft approach" to fighting the coronavirus. While they did ban large gatherings, restaurants and schools for younger children have stayed open. The government has urged social distancing, and Swedes have largely complied.

Lofven said many people have been staying home, which he says has had a positive effect. He did acknowledge Sweden's 3,500 deaths, which was far higher, per capita, than its Scandanavian neighbours Finland, Norway and Denmark, all which took a stricter approach.

Lovgren said most of Sweden's casualties were among the elderly, which, he says had little to do with people "walking around" the streets.

He said Sweden, like several other countries, did not manage to protect the most vulnerable people, including the elderly, despite best intentions.

Swedish media in recent weeks have reported cases where retirement homes have seen a large death toll, with staff continuing to work despite a lack of protective gear or despite exhibiting symptoms and potentially infecting residents.

Some retirement homes also have seen a shortage of staff because employees either have refused to work or have been encouraged to stay home even with mild symptoms.

0 #1 Lysol 2020-05-17 18:47
Unlike Sweden, Uganda has a younger population. Older population always have some underlying health issues and are more susceptible to the COVID-19.

Secondly, there are not so many testings being done on the local population, except for the truck drivers. Many more cases will come with time and testings.
Report to administrator