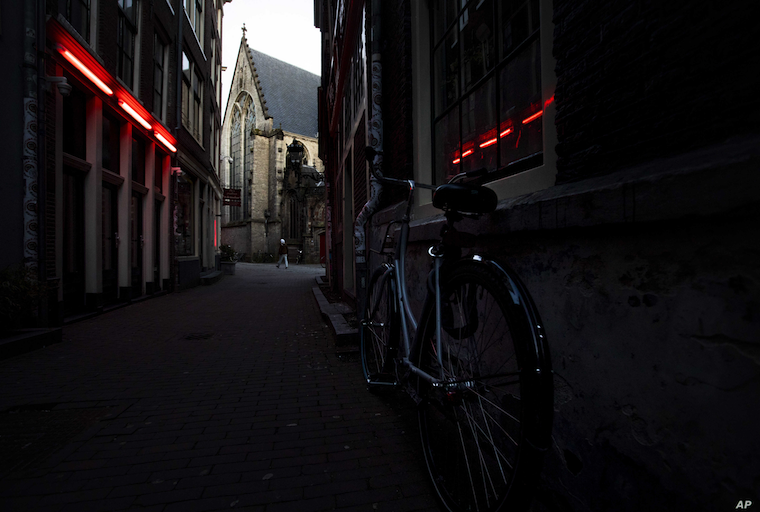 FILE - A lone man walks past closed brothels in the capital's famous red-light district on a weekend night in the center of Amsterdam, Netherlands, March 20, 2020

The red-light district is one of the main tourist attractions in Amsterdam. While coronavirus lockdown restrictions are starting to ease, sex work is not allowed to resume until September.

Advocacy groups say the lack of support for sex workers has exposed how vulnerable they are under Dutch law. Hella Dee, not her real name, has been working in brothels in and around Amsterdam for the past 10 years, but she hasn't had any income since COVID-19 restrictions were enforced in March.

She started a fundraising campaign when she realized how many of her colleagues were in financial distress.

"We need to take bigger risks because there's hardly any clients out there and taking bigger risks leads to, you know, more people experiencing violence," Dee said. "So we've been raising funds and distributing emergency fees ... for people who need money today to pay for food, to pay for other basic expenses, medicine, transport."

The campaign collected over $20,000 that was distributed to over 400 sex workers. Masten Stavast, who rents out 31 windows to sex workers in the famous red-light district of Amsterdam, doesn't understand why massage parlours are operating again in the Netherlands, but sex workers will be the last group to resume work.

Stavast is compiling a protocol with sex workers, club owners and other people from the red-light district to lobby policymakers on how sex work can safely resume before September.

"The reason to put it on the last group is really strange, especially because it's always one to one, and not in a crowd or whatever," Stavast said. "If everything goes all right on July 1, there can be 100 people together, why not one to one then with all the protection that everybody has?"

Many sex workers are excluded from the billions of dollars of government support offered to overcome economic hardship due to coronavirus lockdown measures. The reasons for their exclusion varies, from not being registered at the chamber of commerce, to working in private clubs that fall under different labour laws.

The Netherlands was one of the first countries in the world to regulate sex work in 2000, but a new national proposed law would force sex workers to acquire permits. At the same time, the city of Amsterdam wants to limit window prostitution in the centre.

Yvette Luhrs, a sex worker who mostly works online, is also a rights activist aligned with the Prostitution Information Center in Amsterdam. Luhrs worries about the future of sex work in the Netherlands after coronavirus.

"The city council of Amsterdam but also the national government, they're both in the procedure of creating new laws and regulations around sex work and they turn out to be very restrictive," Luhrs said. "And the fact that the brothels are closed now and people are in this corona scare, we assume they will use this crisis to push their new laws."

The United Nations stated in April that sex workers across the world are reporting a lack of access to coronavirus emergency social protection schemes, and urged countries to not leave sex workers behind in their response to the virus. The red-light district has been located along the canals of Amsterdam since the 15th century. It attracts millions of tourists each year.