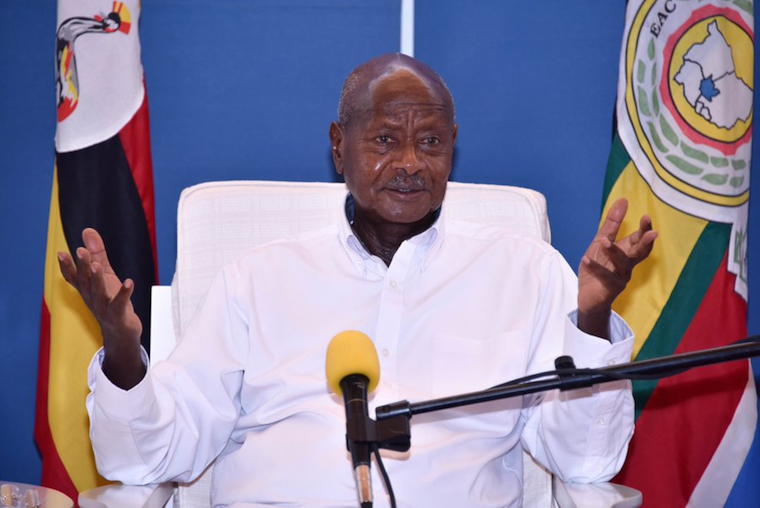 President Yoweri Museveni has threatened to import food from Mexico, if traders try to hoard it so as to increase prices.

Speaking on Sunday at State House Nakasero, Museveni said, he will never allow a group of suppliers to take advantage of Ugandans in distress.

“I heard that also there was some games of some suppliers trying to hoard so that the price goes up. I don’t like selfish people, if I hear there is no enough maize and beans in the market, then I will import. Too bad for you because you are crooks, you want to take advantage of the people. Sorry, we are going to import and those things of yours will rot in your stores,” Museveni said.

He added that he’s aware of the games that they are playing and he will beat them to it.

“Any whisper that the food is not enough, I will import. I will give the billions to foreigners because you want to kill your brothers. You sell us bad food, we go for you if its bad food, eat it. Why do you want to sell it to us,” Museveni said.

The president also used the address to lift the ban he had imposed on boda bodas and bicycles to stop moving at 2 pm.  He said they were concerned by boda bodas moving at night because they would be used to commit crime. He adjusted the boda boda curfew to 5 pm.

The president also said that they are studying the idea of having one person moving in the trucks.

“We had said that the lorry should have three people but some people are saying that three people are not necessary and actually are a danger they even cause accidents. I call upon the taskforce to study this and advise me,” Museveni said.

Among the preventive guidelines, public transport and non-essential movement is banned until May 5, however, cargo drivers are still allowed to move in and out of the country. Each truck is allowed a maximum of three crew including the driver but Museveni said this might be adjusted to one person.

The president also issued another order stopping all people who have died of coronavirus elsewhere to be returned to Uganda.

“When somebody dies of Covid don’t try to bring the body back; let it be buried where somebody has died. I think if somebody was to die here, it will be the health workers to bury him not the relatives,” Museveni said.

He also warned drivers who don’t have stickers and are not essential people from driving on roads.  He said those who will be caught, their cars will be confiscated.

“There are still some crooks in society who don’t want to cooperate…we have said don’t move around if you’re not essential, those vehicles will be confiscated and legally we shall see what to do about them because you are trying to kill Ugandans by not cooperating,” Museveni said.

Museveni also warned people from cultivating on river banks and lake shores saying, his government was going to move strongly against all those caught. He said the farmers were to blame for last week's countrywide power black caused by a floating island that got sucked into the turbines at Nalubale hydropower dam in Jinja.

Museveni said the floating island was found to contain yams, cassava. He further said Lake Victoria water levels have risen to the second-highest record at 13.21 metres compared to 13.41 metres in 1964.

Museveni said while his partners have tried to downplay the importance of scientists and hence the need for higher salaries, three problems, of locust invasion, floating island and coronavirus outbreak have helped highlight the value of scientists. He said the scientists have managed to fight off a second invasion of locusts without causing much damage to crops.

He also said the scientists had been able to divert another floating island away from the dam to stop another blackout. He also thanked Ugandan scientists for managing the coronavirus pandemic saying they have made a lot of progress including working on the vaccine that the country will soon learn about.

He said he's tired of begging partners in government to have the scientists, engineers, doctors and science teachers get better salaries yet clearly they are doing better contributions to the country than their arts counterparts.

2- Unfortunately , out of touch and rusted as the government is -- Mr museveni does not even know how much food the country has !

As things are with Museveni the only one to have a say, & has destroyed every institution, what will Ugandans do without him!

Ugandans should know they will be so lost & without alternative leadership after Museveni & there won't be chance to a start, but confusion, power hunger fignt without any one knowing how to govern, just as it is countries that UNITED to throw out dictators in power for so long & not prepared to run the country without them; Zimbabwe, Libya, Irak...!

The British could go along while Boris Johnson was in medical care, right?

If it was Museveni unable to dictate moves, who would do it in his place while waiting for his recovery, in the tribalistically divided & ruled zone without real opposition with ready programme for continuity?

Ugandans MUST wake up before it's too late!
Report to administrator
0 #3 Jama 2020-04-20 23:30
Theoretically you are defending scientists but practically they are neglected.

Ugandan scientists have done wonders but failed to receive gorvnment support which could enable them develop their work.

How far is kirra motors project?
Report to administrator
0 #4 Kabayekka 2020-04-21 00:34
That does not make business sense. Amin who did as China does and take these hoarders to Katwe and shoot them would do well.

Trouble is these hoarders are NRM diehards.
Report to administrator