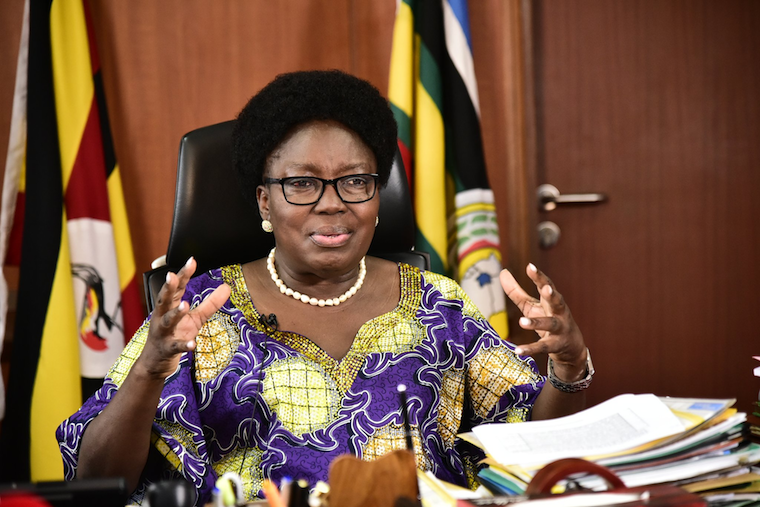 The speaker of parliament Rebecca Kadaga has justified the allocation of Shs 10 billion to MPs to carry out 'supervision and advocacy' against the spread of coronavirus.

Parliament has come under heavy criticism after the MPs this week quietly allocated themselves Shs 10 billion, even cutting the health budget by Shs 5 billion to come up with the figure.

Kadaga explained that MPs are 'busy on advocacy' and are following up on what is happening in hospitals around the country. However, this is the exact work that MPs are paid handsomely to do.

Commentators wonder why the MPs needed extra money. There are 452 MPs in Uganda’s parliament, and breakdown of the money means each MP gets at least Shs 22,123,893 (Shs 22 million).

President Yoweri Museveni has appealed to the private sector to contribute monetary and non-monetary donations including vehicles and food. As of Tuesday, at least Shs 4 billion had been contributed and a total of 31 vehicles to be used by the health sector.

Ugandans across the country have asked for relief food during the lockdown, but the president said the government doesn't have enough financial resources to cater for everyone.

Kadaga said the allocated money will also be used to maintain and service MPs’ ambulances surrendered to the ministry of Health to help with the evacuation of patients. She also said the drivers of those ambulances ought to be paid salaries while they are at work.

Many foreigners are left in bewilderment when they learn that Ugandan MPs own individual ambulances, a responsibility that they should be holding government for.

Kadaga said MPs are 'looking into' constituents' needs by providing food, water tanks among others. While appearing on Capital Radio last week, Kira Municipality MP Ssemujju Nganda said his home is thronged every day by locals asking for food, money for healthcare or an ambulance for transport to the hospitals.

Kenyan MPs similarly also came under criticism when they refused to take pay cuts even when the presidency, speakers and judiciary undertook voluntary cuts to contribute towards COVID-19 fight in their country.

Lawmakers in Nigeria agreed to forgo their salaries as contributions towards the COVID-19 fight while in Malawi, President Peter Mutharika also announced taking a 10% salary cut along with his ministers.

12
+2 #11 Tim 2020-04-16 18:14
I can bet that not all MPs have ambulances and that not all who have, surrendered them to MOH or to District COVID Task forces. Shouldn't government fuel the surrendered vehicles since it is the one deploying them and not MPs?

Mobilization and advocacy!!!! So what are District COVID-19 Taskforces doing? Maybe WhatsApp clips of some MPs stretching themselves amounts to mobilization and they should be paid for their posts and tweets!

I have watched on TV and read in the papers some individuals and companies donating 5,000/=, 10,000/= , a teacher who sacrificed donated his monthly salary(according to PS, MOH) and of course bigger amounts or their equivalent.

All these are supplementing government. Where are our Hon. MPs? I can visualize government with a bagful of taxpayers' money, using one hand to dish out the cash from the bag and holding a bowl with the other. The most honourable thing MPs can do is to 'gift' MOH with this Sh 10b.
Report to administrator
+3 #12 Abalang 2020-04-16 18:30
So, what will the metric be for measuring the performance of the MPs and use of these funds?

How and who will they supervise given the travel restrictions? How will they be protected from infection and possible transmission?

How will their work relate with that of the Covid 19 taskforce? These are pertinent questions needing answers, and hopefully, they were considered in coming up with this decision.
Report to administrator
+4 #13 kirya 2020-04-16 20:02
She is a graduate of m7 school of thieves .She majored in corruption with a minor in greed.

She got an A in stupidity,A following,A in sucking up, and a D in using commonsense. A useless woman who cannot attract the waragi drinkers
Report to administrator
+2 #14 Kalibbala 2020-04-16 22:02
That is What Happens If Someone Consumes Crude Waragi ..This Poor Lady is a Drunkard..Period..Sewage is Floating all over Kampala,The City is in Total Darkness,..Slums Every Where..

Jinja Her Home Town was Once the Industrial Hub of Uganda...Today it is a Ghost City..With Roads turned into Compounds by The Chosen few..Kadaga You are Disappointment ..
Report to administrator
+2 #15 Eden Collins 2020-04-17 05:48
now what would we expect from a person like kadaga, even I fail to understand the president in all people you choose kadaga, people we are here suffering far away from our families providing security to the nation,dead MPs are there sharing money in this trying moment, but why, why Uganda,
Report to administrator
+2 #16 Nalongo Mutiima 2020-04-17 13:07
Where is LT COL. Nakalema, the so-called anti-corruption crusader of State House?

Parliament has colluded with Treasury to hike the supplementary budget to steal and share the taxpayers money. The budget was passed without a debate. This was a huge corruption scandal.
Report to administrator
12