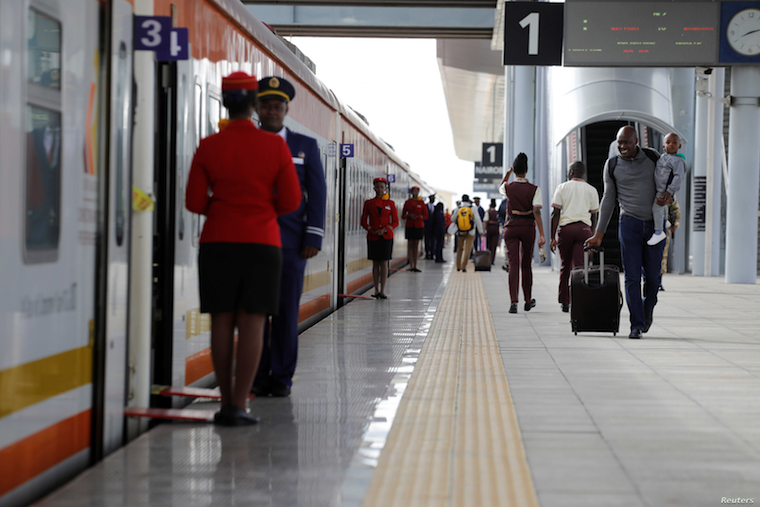 FILE - A man carries an infant as he walks along the platform in front an SGR train traveling to Mombasa from the Nairobi SGR Terminus, outside Nairobi, Kenya

Kenya this week is celebrating 1,000 days of standard gauge railway (SGR) operation, with 13,000 trains covering 6.3 million kilometers. The Chinese-built railway moves people and goods from the port of Mombasa to the capital, Nairobi, and also to a small town in Naivasha.

As the government boasts about the country's most expensive infrastructure project since independence, the $3.2 billion cost has moved front and center. Many Kenyans think the country got a raw deal compared to its neighbors, Ethiopia and Tanzania.

“I would like once again to applaud Africa Railway Cooperation Company Limited for having attained a high point of operations on Madaraka Express passenger and freight services," said Asava Kadima, the human resource manager of the Kenya Railways Corporation.

"In regards to the ongoing developments I have just highlighted, I would like to say that the future of the railway sector in Kenya is defined, poised to be better.  Many benefits have already been realized.”

As the celebration was going on at the Nairobi railway station, many Kenyans continue to question the cost of the line that started to operate in 2017. Kenya borrowed more than $3 billion from China to build the 472-kilometer railway from Mombasa to Nairobi. It borrowed another $1.5 billion for a second branch from Nairobi to Naivasha.

Critics of the projects say they are putting the country into a debt crisis and making it indebted to China. Okiya Omtata is an activist who challenged the government in court to make a deal with China public since 2013.

“What happened with the SGR, the loan from Exim Bank of China was paid to a contractor, so it never came to Kenya. What came to Kenya was a debt," he said.

"There was the question of the proposer of the project being the implementer and also overseeing, which also is a conflict of interest that arose. The other question was, was it standard gauge or Chinese gauge railway if you look at the contract, it’s a Chinese standard. So we cannot go to Brazil and buy spares for this. We must buy things from China. We are being tied to China forever.”

Omtata has petitioned the court to terminate the railway deal with the Chinese. He also argues the cost of the railway construction was inflated. Kenyan media reports $1.3 million was paid to five engineers supervising the construction of the Mombasa — Nairobi railway line.

The Kenyan government has not yet made public what they agreed upon with the Chinese constructors on the railway project. Kenya’s head of Transport in the parliament, David Pkosing, says people need to petition the Parliament.

“Let them petition the parliament and tell us this is inflated for this reason we know. They have no evidence. People, when they don’t have evidence, they create rumors and peddle what I call fake news," he said.

Speaking to Kenyan journalists in 2019, China's ambassador to Kenya said Chinese law protects the commercial interest, and it was not up to him to agree or disagree with secret dealings between his country and Kenya. Omtata has not received a ruling yet, but he hopes the law will catch up with some government officials in the future.

“Currently we have article 225, clause six, which requires that if you mess up while in public office, and public funds are lost whether you are a politician or a public servant, you are liable whether in office or out of office. So we hope we will be able to follow up on these people,” he said.

Last week, US Secretary of State Mike Pompeo, while visiting Ethiopia, warned African leaders about countries that breed corruption, dependency and do not train African workers.

Kenyans work hard & should have transport network that enables them go to work/travel comfortably. Its the way a country handles business with China that is the problem!

European medicins are produced in China because of cheap cost of labour & Europe & China are alright with this!

Kenyans MUST give themselves chance so that B.Obama helps them too!

Ugandans MUST become ONE people, join hands to ensure change, then go for the kind of governance they want, to give chance to be part of today world & development!
Report to administrator
0 #2 Lysol 2020-02-27 23:47
China always build railroads/ways to nowhere. It a lesson to many greedy and naive African leaders for Chinese investments ( because of no political accountability?) to them.

China economy is just a bubble which can bust at anytime.
Report to administrator
+2 #3 Kabayekka 2020-02-28 11:57
The issue should be value for money. Much more money has been lost in African officialdom and blantant corruption.
Report to administrator
0 #4 Stephen 2020-02-28 22:51
Did I read 13,000 trains?? Just curious if Kenya has that number of trains traversing their country...smaller than Tanzania!
Report to administrator
0 #5 Kabayekka 2020-02-28 23:04
As Africa plans and hopes to construct a trans-railway east and west way and another one from South Africa to Egypt, one wonders where the money is going to come from other than from the many customers who will use such a modern high tech engineering infrastructure.

What one hopes is that the revenue collected would be seen to be paying properly such debts!
Report to administrator
0 #6 Amooti Mugi 2020-02-29 04:29
Kenyans should celebrate having the SGR on the ground fully functional.. Other black African countries are incapable of achieving what Kenya has achieved...
Report to administrator
0 #7 godfrey mubiru 2020-02-29 18:41
Quoting Stephen:

Did I read 13,000 trains?? Just curious if Kenya has that number of trains traversing their country...smaller than Tanzania!

It is the average number of trains per day. 13000 trains over 1000 days.
Report to administrator
0 #8 miki 2020-03-01 10:42
At least the railway was built. Kenya should move ahead an extend the railway line to the border with Uganda and then direct to it all through heavy traffic to the hinterland.

In other words, from Kasese to Pakwach, our "Problem of Africa" Mr. M7 and cabal, destroyed our only Lunatic Express, the Uganda Railways.

As long as our "Problem of Africa" have a stranglehold on us, we shall never see even a centimeter of the SGR.
Report to administrator