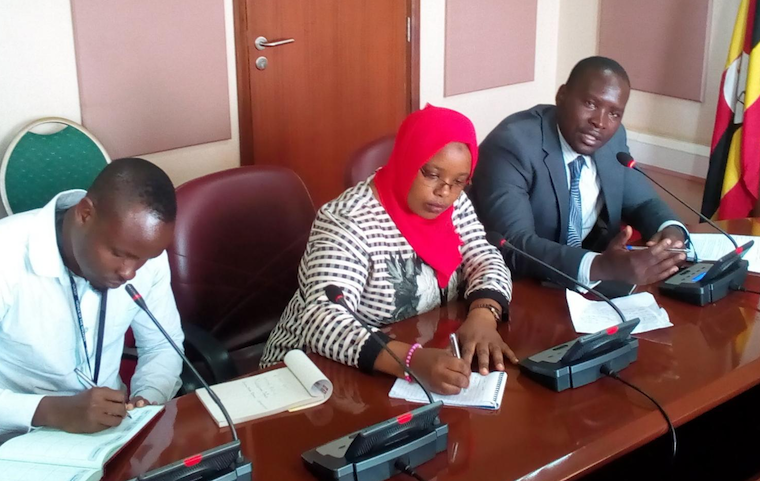 Some of the students who graduated from Rwanda at parliament

Ugandan law graduates from the Institute of Legal Practice & Development in Rwanda have petitioned the speaker Rebecca Kadaga over their failure to practice law in Uganda.

The students petitioned Kadaga, saying they have been rendered jobless after the Uganda Law Council (ULC) declined to accredit them upon their return to Uganda after studying the bar course from Rwanda. According to ULC Rwanda is not under the common law jurisdiction.

Rwanda’s legal practice is premised on the civil law; widely used among Francophone countries, while Uganda practices common law, practiced under the Commonwealth countries. An example in common law is one is innocent until proven guilty, while in civil law, one is guilty unless proven innocent.

Most of the students studied their law degrees first in Ugandan schools like Cavendish University and Islamic University in Uganda (IUIU) but went to Rwanda for the bar course to the Institute of Legal Practice and Development - the equivalent of Uganda's Law Development Centre (LDC) in Makerere.

The bar course is a postgraduate course which allows law graduates to practice as lawyers. Wahab Kasim says he has had to come back to LDC and do a bar course even after doing one from Rwanda because he was frustrated.

He says that although ULC says Rwanda is not under common law, it actually is and in the spirit of East African Integration, those who studied from Rwanda should be allowed to practice as Rwanda fully adopted common law practice.

"The lecturers are from common law systems, the content is common law, what we do at the Legal Practice of Institute is what is done in LDC. In fact, after the six months of studying, we are allowed to come to Uganda to be surveilled or to work under law firms and senior lawyers. Indeed some of us came back. It is six months of study, then 3 months of clerkship." said Kasim.

Nalubwama Afwua, who studied at IUIU says it is not that they failed LDC in Uganda and opted to go to Rwanda, but some of them found themselves in Rwanda for different reasons. She says in any case, she doesn't notice any difference between those studied the bar course in Uganda and those who have qualified from Rwanda.

Kadaga said this is an area that needs to be addressed. According to the speaker, for Ugandans to start practicing in Kenya, it took government intervention and hoped that this too shall be addressed. She says she will bring the matter before MPs so that the legal and parliamentary committee can scrutinize it.

Simon Peter Kinobe, a member of the ULC and president of Uganda Law Society says the problem with Rwanda is that they practice civil law but because of the East African integration, they also started practicing common law which leads to a mixup at times.

According to Kinobe, it is not a matter of superiority, but the fact that Rwanda practices a different law system.

“We have had people from South Africa come to practice in Uganda, but we cannot allow them to practice because although South Africa is well advanced in law, it’s a different jurisdiction of common and Roman-Dutch common law,” he said.

Kinobe now says what some countries have been doing is to look at the papers of students who study out of the jurisdiction and ask them to study what they missed. There are about 200 Ugandan students who completed bar course from Rwanda.