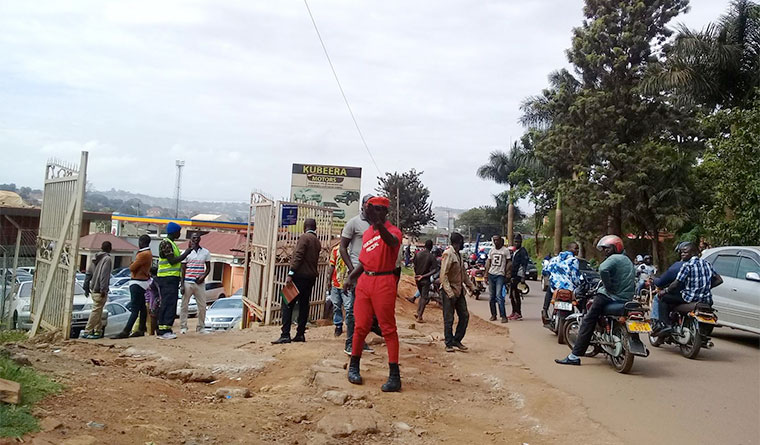 Business grounded to a halt in Ndeeba, a suburb of Kampala following running battles between police and People Power pressure group.

Police fired tear gas and live bullets to disperse charged opposition supporters. It all started after police deployed heavily at Pope Paul Memorial Hall hotel in Ndeeba where Robert Kyagulanyi aka Bobi Wine, the People Power leader was expected to hold a consultative meeting on his presidential ambitions.

Police blocked access to part of the road that leads to the hotel which ignited People Power supporters into protest. They started shouting at police questioning why it was blocking their meeting yet it was happening indoors as police has always ordered.

Police chased the People Power activists forcing them to reorganise, a short distance from the roadblock at around Petrocity fuel station in Ndeeba. They were chanting “People Power, Our Power” while riding on boda bodas at high speeds.

Others from nearby garages lit car tyres on the road causing a temporary blockage. Dauda Sserwadda, a car dealer in Nabunya Pope Paul Road, says they had not been able to attend to customers because of the chaos that forced them to close shop. He says police would rather deal with such issues calmly such that innocent people conducting business don’t get affected in the process.

Joel Nsubuga, a broker at one of the car garages said the protest affected their business as he could not lure potential buyers to his site. He says government should stop disrupting gatherings of the opposition because it disrupts business and abuses the human rights of Ugandans. Faridah Ibrahim runs a snacks stall in Ndeeba said she had to close shop when police started firing tear gas. She says this has affected her day’s earnings.

Bashir Ssenfuma and Steven Muwonge are some of the People Power supporters who were disappointed when blocked their meeting. They had come to the venue only to be stopped by heavily armed police. They condemned the decision of security to block their meeting, saying rather than frustrate their programs, government should address their grievances.

Six people were arrested by police during the protests. Our reporter was unable to get a comment from police spokespersons about the incident as they declined to speak to the media.

Meanwhile, the protests continued to Mulago near Wandegeya after Bobi Wine's supporters stormed the City Mortuary demanding for the corpse of their colleague Ritah Nabukenya.

Nabukenya was allegedly knocked dead by a police patrol car in Nakawa, also a Kampala suburb as she tried to access court to attend Bobi Wine's court case against social media tax. She died from Mulago hospital where she had been rushed.

However, police denied knocking Nabukenya dead, claiming she was involved in an accident with another motorcycle as her boda boda attempted to overtake a police patrol vehicle.

You old smelly rubbish! You go on repeating on and on and on your empty head mantra.,

You are just fooling naive and misinformed readers and youth mostly.

All others are laughing at .Uganda is strong and prospering country under Museveni and NRM and will remain like that to many more years you like it or not.Muysye!!
Report to administrator
12