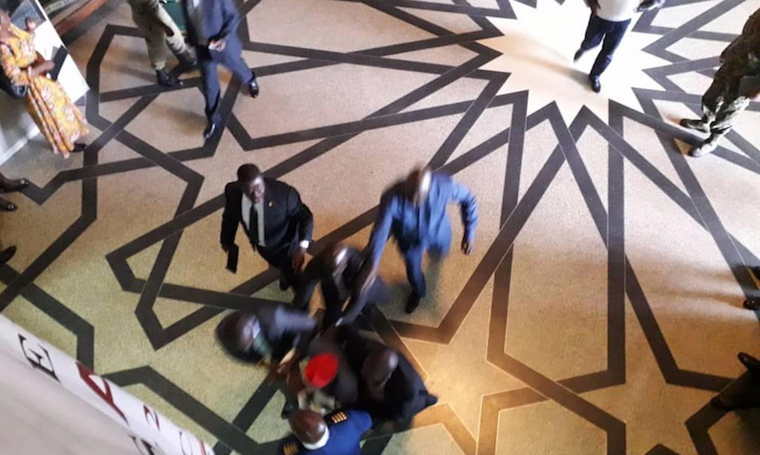 The attackers being dragged out of parliament

Two men jumped from the strangers' gallery in parliament this afternoon unto the floor of the house during plenary.
The incident happened at around 4 pm as MPs debated Lands state minister Persis Namuganza's statement on the upcoming Land Information System International conference scheduled for February 20-21 in Entebbe.

Following the attack, the house became chaotic when the two men; Dafaala Ssenjako and Mutaasa Kafero started punching the MPs indiscriminately including Nwoya MP, Simon Oyet and state minister for Sports, Hamson Obua who fought back.

While jumping the floor of parliament, the two men also damaging the and railing and fluorescent tube which sparked off a sharp noise that many mistook for gunshots. The men jumped to where the MPs sat on the ruling National Resistance Movement side.

Ssenjako and Kafeero who were donning red tops are suspected to be linked to red top brigade which is opposed to President Museveni’s leadership. They entered parliament distributing documents titled "A letter to Africa and Uganda, stop cropping out citizens." They also claimed corruption that is eating up the country starts from parliament.

For a moment, the Internal Affairs minister Obiga Kania ordered that no one else be allowed to enter parliament until after 5 pm. Speaker of Rebecca Kadaga condemned the attack on MPs and warned that the attackers are going to be dealt with "severely".

Plenary went on normally with MPs debating the administration of the Judiciary bill.

The desperate corrupt regime will try anything to discredit and sabotage Bobby Wine. The games of Museveni are getting too old like him. Ugandans will not buy them anymore. The alacrity of now should send the corrupt M7 to his rest.

By the way, everytime I google Museveni , it turns out to be Mussolini., the Italian dictator who was a friend of Hitler and a murderer. They hanged him..Uganda may do the same to M7 and his cronies one day.
Report to administrator
+2 #2 Wainanchi 2020-02-20 02:25
Parliament is not jungle.Where is security??

Securiry to e changed urgently and unauthorised people not allowed to stand on galleries and wear red outfits and cause incidents
Report to administrator
0 #3 Lakwena 2020-02-20 07:39
In other words, many Ugandans especially the youths, are now bottled up with frustration and anger such that; even the fear of Parliament/MP, imprisonment and death no longer bother them.

At this rate, maybe the MPs and indifferent government officials, should expect more random violence.

E.g., why did the MPs chicken out of censoring the Devilish Gen Tumwine who is superintending over the torture of innocent Ugandans in Safe Houses?
Report to administrator
+1 #4 WADADA rogers 2020-02-20 10:04
That is not a Parliament by ordinary standards, it is a house of opportunistic fellows waiting for deals to fatten their accounts while waiting for another election to rig, they are united for one cause, making money
Report to administrator
+1 #5 WADADA rogers 2020-02-20 13:09
What these two red top men did was right, ours is no parliament all but a theatre of thieves
Report to administrator
0 #6 Lukyamuzi Kabakasman 2020-02-26 10:47
Lets get things right. None of those boys threw any punch. All they had were leaflets they were throwing around.

On the contrary it were some 2 MPs that beat up the boys who were not violent at all.
Report to administrator