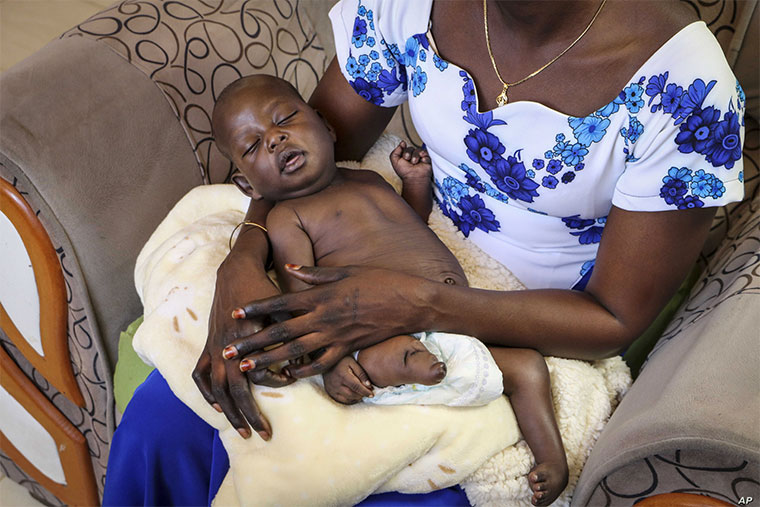 FILE - Baby boy Ping Mayak Geer, who was born with six fingers on each hand, one stunted leg, a deformed foot and kidney swelling, lies on his mother's lap,

The oil industry in South Sudan has left a landscape pocked with hundreds of open waste pits, the water and soil contaminated with toxic chemicals and heavy metals, according to four environmental reports obtained by The Associated Press.

The reports also describe alarming birth defects, miscarriages and other health problems among residents of the region and soldiers who have been stationed there. Abui Mou Kueth’s infant son, Ping, was born with six fingers on both hands, one stunted leg, a deformed foot and kidney swelling.

“I was shocked the first time I saw the baby,” she said, cradling him in her arms. “I am worried about his future.”

The Associated Press obtained the reports and supporting documents from people with close knowledge of the oil operations, one of whom works in the industry. They’ve never been released publicly.

“South Sudan is running one of the dirtiest and poorest managed oil operations on the planet,” said Egbert Wesselink, the former head of a European coalition of more than 50 nonprofit organizations focused on the impacts of the country’s oil sector.

“I don’t think there’s a single major industrial operation on earth that’s getting away with this,” he said.

There’s been no clear link established between the pollution and the health problems. But community leaders and lawmakers in the oil-rich areas in Upper Nile and Unity states accuse South Sudan’s government and the two main oil consortiums, the Chinese-led Dar Petroleum Operating Co. and the Greater Pioneer Operating Co., of neglecting the issue and trying to silence those who have tried to expose the problem.

An AP reporter was detained and questioned by government officials and government security forces working on behalf of the oil companies. Neither company responded to multiple requests for comment on the reports, and did not answer detailed questions sent by email and text from AP.

The reports show that the government and the oil companies have been aware for years that contamination from drilling could be causing severe health problems, but little has been done to clean up the mess.

The oil rich area around Paloch, a city in Upper Nile state, is dotted with exposed pools of toxic water. A chemical junkyard in Gumry town, about 45 minutes from Paloch, was strewn with overflowing containers of black sludge that seeped into the ground and were surrounded by toxic waste, when an AP reporter visited in September 2018.

“We’re losing children,” said Nyaweir Ayik Monyuak, chairman of the Women’s Association in Melut. The 43-year-old lost two children of her own between 2008 and 2011.

She and a dozen other women, crowded on a tattered L-shaped sofa in a dimly lit shed in Melut, told harrowing stories. Six had lost babies in the last 10 years. And all of them knew someone who had struggled to conceive, had miscarriages or had given birth to a child with deformities such as stunted limbs or concave skulls.

The two earliest surveys were performed in 2013 and 2016 by South Sudan’s government. They found oil pollution across the region and soil and water samples showed contamination, including mercury levels in the water that were seven times what is permissible under U.S. Environmental Protection Agency standards.

In July 2018, Greater Pioneer, which is made up of the state-owned China National Petroleum Corp., the Malaysian state-owned Petronas as well as South Sudanese and Indian drillers, commissioned a study that found significant oil spillage and water pollution at the waste treatment facility at some oil operations that had been abandoned during the civil war.

A November 2018 report, commissioned by Dar Petroleum, found “extremely high” levels of hydrocarbons -- chemicals such as benzene that makeup oil and natural gas and can cause serious health effects. It also documented 650 waste pits filled with water contaminated with arsenic and lead, and millions of liters of water contaminated with drilling chemicals sitting in ponds.

South Sudan’s oil ministry instructed Dar Petroleum to move ahead with the proposed cleanup, according to a December 2018 letter seen by the AP. But Dar Petroleum -- a consortium that includes China’s state-owned China National Petroleum and Sinopec, along with companies in Malaysia and Egypt and South Sudan’s state-owned oil company -- never acted, according to two people with close knowledge of the oil operations in the area who didn’t want to be named for fear of their safety.

There is no definitive proof that the pollution caused the health problems. South Sudan’s crippling five-year civil war killed almost 400,000 people, displaced millions and plunged pockets of the country into famine.

“The pollution is a public health and environmental emergency,” he said.

South Sudan’s petroleum minister, Awow Daniel Chuang, said until there’s scientific evidence tying health problems to oil pollution, no conclusions should be drawn. In July 2019, the Greater Pioneer Operating Company flew baby Ping and his parents to Nairobi, Kenya, and then to Berlin for what they thought would be medical treatment.

Ping’s father, Cornelius Mayak Geer, says the company told him that they would first do tests to determine if Ping’s deformities were tied to oil pollution. If they found a link, Geer says they told him, they would pay for treatment.

But the family returned from Berlin last month after loads of tests, but no treatment for the baby. Geer said the company told him the child’s problems were genetic, and not caused by oil pollution. But they never shared any test results with him.

“The baby still cries day and night because of the pain and not feeling well,” he said. “They’re just buying time until the baby dies.

Environmental experts say there is little incentive for multinational companies to do anything because it is easy to get away with things in impoverished countries like South Sudan.

Oil accounts for almost all the country’s exports, according to the World Bank. And South Sudan is trying to revive its economy by expanding the industry.

“No one’s really watching. The government is neither willing nor able to monitor and enforce its own environmental laws,” said Luke Patey, senior researcher studying China’s oil investments in Africa at the Danish Institute for International Studies.

He said the result is “a vicious cycle of negligence.”

Oil is a Curse. Period!

The Nile River in South Sudan is the main world's producer of the Methane gas which heavily contributor to the Global Warming, asides from cattle/cows.

Next will discuss how the many civil wars have affected the environment of that new country. A failed State.
Report to administrator