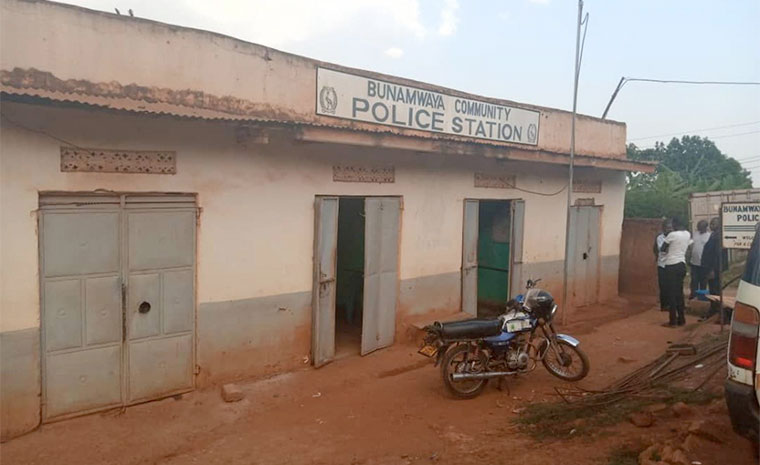 A police constable has shot dead his colleague and a Local Defense Unit (LDU) personnel before committing suicide.

Owoyesigyire said Ojilong had a heated argument with Opito on how to proceed with a certain case. In that process, Ojilong picked a gun and shot Opito several times killing him instantly.

“One LDU personnel that was passing by was seriously wounded in the process. Ojilong later committed suicide by shooting. The LDU that had sustained injuries was pronounced dead on arrival at Kitebi health centre,” Owoyesigyire said.

Kampala Metropolitan South responded to the scene and is currently actively investigating the incident. The gun and cartridges have been recovered, bodies have also been taken to city mortuary at Mulago hospital.

One eyewitness, Maria Namafulo Twahib, said at around 2 pm she saw Ojilong standing outside the police station shedding tears. Namafulo says that she inquired from Ojilong why he was crying, but he instead asked her to write down his contacts.

“He told me in case of anything, I should inform his people. Minutes after I had left him outside the police station, I heard gunshots and I didn’t know what had happened to Ojilong,” Namafulo said.

Shamim Nnabagereka, head of Women Council at Bunamwaya zone, said when she was going to the nearby trading centre, she saw Opito standing at the entrance of the station wearing striped shirt looking puzzled.

“After few minutes later, I saw an LDU food truck arriving at the station. An LDU officer jumped out the truck and he entered the police station and he seems to have attempted to save the situation and he was also shot,” Nnabagereka said.

At least 17 cartridges were picked at the scene.

+1 #1 Lakwena 2020-02-12 08:10
In other words, the level of uncertainty, stress, frustration and the deplorable condition of living is transforming Uganda into a living Hell on Earth.

Some of the misery is reflected in the Police Station here above. Where on Earth, in the 21st Century do we still find such a police station?

How is it possible that in a space of three days,10 Ugandans (6 dead) have been shot by members of the armed forces?

And here comes Ben Ojilong, gunning down his college, a LDU and himself.

No wonder the environment in which our policemen work influence their mood and behaviour!
Quote | Report to administrator
+1 #4 Lakwena 2020-02-13 08:24
Quoting rubangakene:

What sort of police station is this; where is our tax going, eh?

No wonder the environment in which our policemen work influence their mood and behaviour!

Rubangakene, because it was founded thrives on lawlessness, Mr. M7's government is not interested in investing in the Law and Order Sector.

That is why all the Police Stations/Post, the Prisons Service and the Barracks are hell on earth.
Quote | Report to administrator
Refresh comments list
RSS feed for comments to this post
Add comment