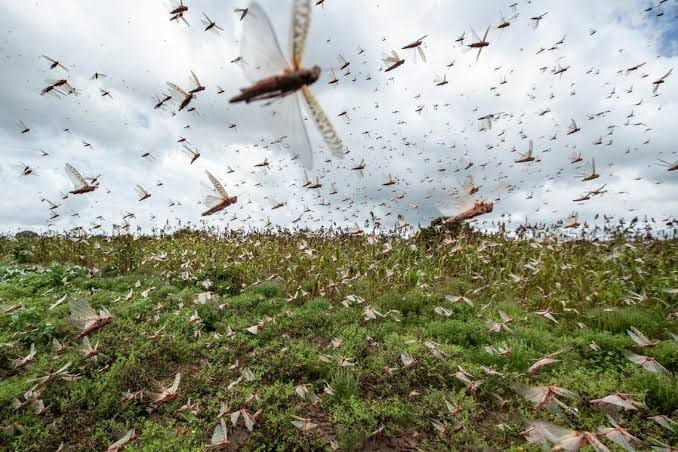 Government has dispatched some 18,000 litres of pesticides to Amudat district in Karamoja sub-region to aid the aerial spraying of locusts that entered Uganda through the northwest Pokot area on Sunday.
The chemicals were loaded and airlifted this morning from Kololo airstrip by ministry of Agriculture and Uganda People's Defence Forces (UPDF) personnel to combat the ravaging pests which have already destroyed acres of vegetation specifically in Okorikeya and Loro villages.

The locusts entered Uganda yesterday at around 3.00 pm through Amudat, Nabilatuk and Nakapiripirit districts in Karamoja sub-region that share a common border with Kenya.

Government had earlier announced that three types of chemicals will be used for spraying the locusts, which are also plaguing other East African countries including Ethiopia, Somalia and Kenya as well as Eritrea, Saudi Arabia, Sudan and Yemen.

The chemicals to be sprayed include Fenitrothion 96 per cent low volume formulation, which is a phosphorothioate insecticide, Malathion, an organophosphate insecticide commonly used to control mosquitoes and a variety of insects that attack fruits, vegetables, landscaping plants, and shrubs as well as Pyrethroid a special chemical class often used by pest management professionals.

Yesterday, state minister for Agriculture Aggrey Bagiire said that ministry of Agriculture has already prepared both manual and automatic pumps for dispatch early morning to Karamoja. He discloses further that they have in stock the chemicals for spraying some using motorized spray pumps and others manual.

The locusts, according to the Food and Agriculture Organisation (FAO), travel in dense crackling swarms which can contain as many as 80 million locusts per square kilometre. They travel at least 150 kilometres a day and can destroy about 192 million kilograms of vegetation in two days.

Uganda has not had to deal with a locust infestation since the 1960s. FAO warns that locusts can reproduce rapidly and, if left unchecked, the current numbers could grow 500 times by June. A swarm can destroy as much food crops in a day as is sufficient to feed 2,500 people.

United Nations secretary-general Antonio Guterres says the sudden locust infestation is a result of climate change. Guterres says that because the seas have become warmer, as a result of increased human activity, the world is seeing more cyclones, creating a perfect breeding ground for locusts. Heavy rainfall and warmer temperatures are favourable conditions for locust breeding according to environmentalists.

“Warmer seas mean more cyclones generating the perfect breeding ground for locusts," he said, calling for more ambition for mitigation and, especially for Africa’s sake, more ambition on adaptation and financing to build the resilience of African countries and communities as they battle the locust invasion.

Guterres was addressing a press conference on the sidelines of the annual African Union Summit, a gathering of 55 African nations in the Ethiopian capital, Addis Ababa last evening.

He emphasized that although Africa has done the least responsible for accelerated global warming, it is suffering the most devastating effects, calling on the developing countries to rise up ‘for Africa’s sake’ and control their emissions.

“I express my deep solidarity with the people and communities affected. The United Nations has issued an urgent appeal for assistance. I ask the international community to respond with speed and generosity to ensure an effective response and control the infestation while we still have the chance,” Guterres said.

He equally commended Africa’s longstanding moral and political leadership on the climate emergency. FAO has estimated that $76 million is needed to scale up efforts to control the rapid spread of this pest and FAO director-general QU Dongyu has called for urgent action to combat the upsurge. So far, more than $18 million has been donated to the efforts to fight the upsurge.

The agency is already working with local and national governments and partners, supporting surveillance and control operations and initiating efforts to safeguard livelihoods and assist in the longer-term recovery and resilience of those affected.

This is no place for smoke combat response to anything, my friend. Unless the plan would be the burning of everything in this corridor, which burnables are few and far apart in some places of this region.

Even aerial spraying would be a very daunting task way beyond Uganda's capacity.
Quote | Report to administrator
0 #22 rubangakene 2020-02-11 22:54
Whatever happened to Desert Locust Control of East and Central Africa based in Addis Ababa?

In my opinion there are so many useless fora in our Africa e.g. EAC, OAU, Great Lakes and so on, peopled by people who know f-all, they just sit and 'eat and drink' in luxury hotels and conference centres oblivious of their remit.

What about the many universities who receive research grants every year to forecast such calamities? we had ICIPE (International Centre fr Insect Physiology and Ecology) attached to Nairobi University.

In my view any body wishing to run a university should have a purpose to improve the life of a nation rather than issuing gowns and pocketing these grants.

So what has the media department and Computer Studies contributed to any progress in Uganda society so far?
Quote | Report to administrator
0 #23 Wooden K. 2020-02-12 12:53
Yes , I hear you Miki !
But lets keep things in proper context : herbicides that ara normally used in Commercial farming are usually designed to kill a particular weed

Even some pesticides are desinged that way . Still , it has never been ruled out that these poisons are eventually harmful to animals and humans.

Here , we are not talking about weeds but very tough insects . Do you know if how harmfull the pesticides that will be sprayed over Karamoja are ?

At least , one expert on the ground has clearly stated that bees , butterflies and other nectar-feeding insects will die side by side with locusts.

That cancels out your argument on satttlement patterns and the distancies . These people are prepared to cover the whole corridor , spraying manually and by air.

Remember too that the principal issue is about protecting food crops . That means that in place like Karamoja, which is not particularly known for its vast farming, its possible for 8000 soldiers to select and cover populated areas and be able to light fires that scare the hell out of any invading insects.

I repeat , it has been done before. The only problem is that we have become brainless imitators .
Quote | Report to administrator
123
Refresh comments list
RSS feed for comments to this post
Add comment