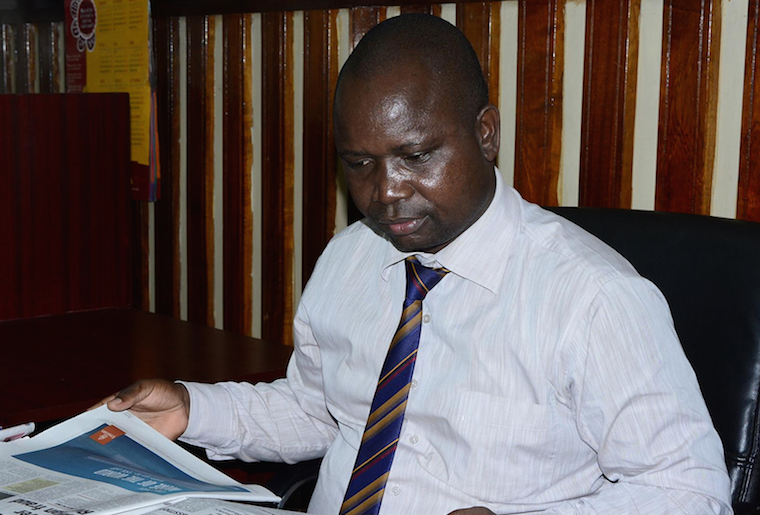 The clerk to parliament Jane Kibirige has extended indefinitely the forced leave of parliament's director of communications and public affairs Chris Obore.

Obore’s trouble with parliament started in March 2019 when Kibirige notified him that the Inspectorate of Government (IG) had conducted investigations noting that his 2015 recruitment at parliament was irregular. According to the IG, Obore did not have the requisite qualifications for the job at the time of his recruitment.

According to the job advert, a suitable candidate was expected to hold an honors degree in mass communication, communication studies, journalism or arts with communication and public relations studied as subjects, from a recognized university plus a master's degree in a relevant field.

The applicant was also expected to have working experience of 10 years, part of which was as a communication/public relations or information, protocol and public affairs department from a recognized institution or at the level of assistant commissioner in a government institution.

At the time, Obore had been an investigative reporter with the Daily Monitor and only held a bachelor's degree in mass communication, obtained from Islamic University in Uganda. He completed a master's degree in public policy and governance in 2018 at Uganda Management Institute (UMI).

A subsequent systematic investigation by the IG established that the appointment was based on illegalities and that it was in contravention of the parliamentary service regulations. On the basis of the letter, Kibirige has instructed a review of Obore's employment with parliament.

But Obore went to the courts to seek redress and block his termination. During the same time, Obore was sent on forced leave for 144 days, which had accumulated from his annual leave. The days have now elapsed.

In a letter dated February 5, Kibirige made reference to last year's communication sending Obore on leave, saying all the matters have been discussed by the parliamentary commission and she was directed to ask Obore to remain on leave.

“While waiting to be guided on the way forward by the commission, I have been directed to instruct you to remain away from your duties, on the same terms as earlier communicated to you in my letter of 18th September 2019 until the commission guides accordingly,” the letter reads.

The clerk says that by copy of the letter,  the deputy clerk corporate affairs Henry Waiswa is instructed to continue managing the affairs of the department of communications and public affairs.

The letter was copied two the speaker Rebecca Kadaga and deputy speaker Jacob Oulanyah, the deputy clerks and counsel of parliament.

Obore is being represented in court by law firm Kampala Associated Advocates seeking a judicial review on the termination of his contract. Kibirige in her response said Obore’s contract was not terminated but only brought his attention to investigations by the IGG.

+3 #1 WINNER 2020-02-08 21:31
But really Obore why did you let yourself be entangled so easily with this NRM parliament when you were doing so well as an investigative journalist?

You have lost the integrity you had and you have been made a laughing public stock by those who offered you a sham job in parliament.

The IGG is just being used to legalise your down fall. Ofono Opondo is the next on the chopping block, once his usefulness is done, he will find himself in the slums of Tororo.
Report to administrator
+2 #2 Sabiti 2020-02-08 22:45
I am not a fan of Obore, I think he is a moron to be honest, but I wonder what the problem is in having an unqualified and poorly educated communications director for a parliament full of poorly educated parliamentarians.
Report to administrator
+3 #3 Lysol 2020-02-09 01:20
Obore beat it and go away forever. A disgrace corrupt so-called grandkid of Museveni.
Report to administrator
0 #4 Lakwena 2020-02-11 08:26
It was Gen Tinyejusa who told the world that: it is only the dog that turns around and lap up its own vomit. But he miserably failed that test and as we pity Obore, one would think Gen. Tinyejusa is already resting in peace.

You can't lambast Mr. M7/NRM over all his ills; flip-flop around to work with him/them and get away with it. NYET.

In other words, Including luring his victims with lucrative jobs/privilages, only Dr. Besigye knows how Mr. M7 is a such a wicked, vicious vindictive man from hell.

The man will spend whatever it takes: to bate, nail and finally humiliate you into a nameless abyss. I now e.g. pity Dishonorable Beatrice Anywar.

I am sure deep inside, she feels like a drunkard who has peed and shit on himself. Apparently Amama Mbabazi is making the the same silly mistake to go back to M7's fold.
Report to administrator
0 #5 WADADA rogers 2020-02-11 17:08
Let Obore leave these guys to take over their office, otherwise, if he insists, he may be given a rude welcome, the one they usually give to those that are not wanted, kill him using a slow poison or plant nails on his seat the way the Basoga did to Bishop Bamwoze
Report to administrator
0 #6 rubangakene 2020-02-11 23:26
Can't this guy get another job somewhere else, are his expertise not transferable?

Have you ever watched a dog trying to scratch a place its paws can't reach? Oh my Uganda, please appoint this guy to run The Uganda 'Marua Suckers Association', we can find for him an office around Kisenyi or Kibuli, his choice!
Report to administrator