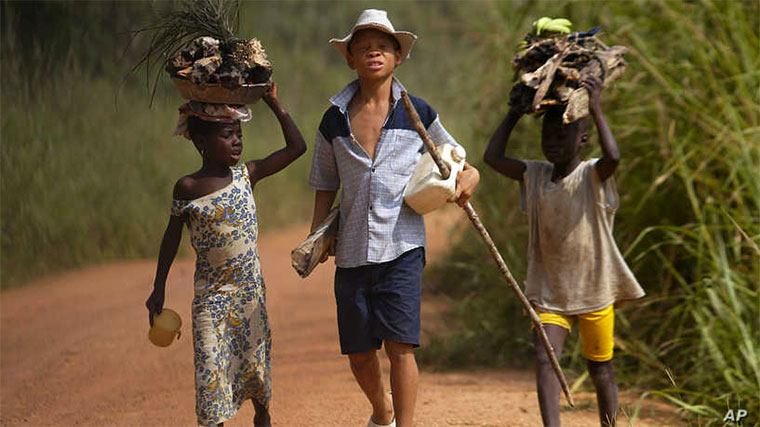 In this June 30, 2005 file photo, children living in a cocoa producing village walk back from the fields carrying wood and food stuff in Oume, Ivory Coast

Authorities in Ivory Coast say they rescued 137 children who were the victims of traffickers and groomed to work on cocoa plantations or in prostitution.

Police rescued the children after surrounding the eastern town of Aboisso and carried out a two-day search of cars, farms, and nearby villages. Officials say the children ranged from age six to 17 and were brought into Ivory Coast from Benin, Ghana, Niger, Nigeria, and Togo.

The victims are in care of a charity in Aboisso while authorities search for their parents. Senior police officials say they plan to increase operations aimed at stopping child trafficking.

"Ivory Coast's image is tarnished by child trafficking. We are appealing to all parents: a child's place is at school and not on plantations," Aboisso's deputy police chief Kouadio Yeboue Marcellin says.

Ivory Coast is dependent on the cocoa and cashew crops and poor farmers depend on child labour to pick the beans and nuts. Western chocolate companies, including some of the biggest such as Nestle and Hershey, have pledged to stop buying beans produced by child workers. Critics say such efforts have been only modestly successful.

0 #1 Kabayekka 2020-01-17 03:57
So where have all the profits from the great chocolate gone to in the very rich Western countries since this food was discovered?
Report to administrator