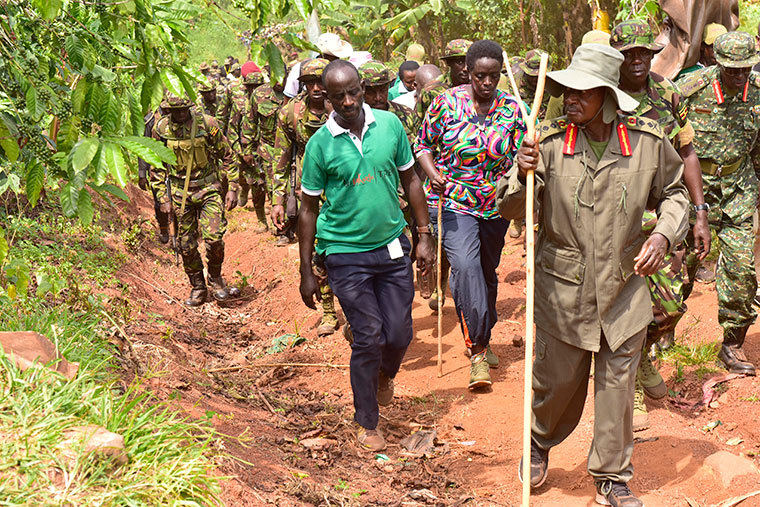 With a little nudging, Opondo dismantled a carefully constructed government-spun narrative that President Museveni, the chief-walker, trekked 195km in a symbolic journey down memory lane to retrace theatres of the NRA/NRM rebel conflict that catapulted him to power 34 years ago.

Opondo, who was speaking on the show, which airs live every Saturday morning, was nudged into spilling the secrets of the well-publicized trek into public view by Bugiri Municipality MP Asuman Basalirwa and lawyer Mary-Anne Kasule. The two lawyers loudly doubted that a 75-year-old Museveni could have walked the 195km-long journey dubbed Afrika Kwetu trek in six days.

“We trekked the full distance of 195km but certainly, no one walked all this because we had motorized sections [of about] 100km,” Opondo said.

He said the section meant to be covered on foot measured 95km, and only five people including himself, state ministers; Godfrey Kiwanda (Tourism) and Peter Ogwang (ICT) plus some army officers completed the stretch. The trek began on January 6, from Galamba in the central district of Wakiso and ended at Birembo in Kakumiro district –the former coordination base of the NRA fighters in Bunyoro sub-region.

Opondo wondered why the trek had been confused for a walk. He blamed journalists for failing to differentiate between walking and trekking. To trek, according to the Cambridge English dictionary, is to walk a long distance, usually over land such as hills, mountains or forests. In fact, earlier statements issued by the presidency indicated that the entire 195km journey was to be covered on foot.

“The trek which should be on foot should remind the elderly but also sensitize the young people including the [youth], the heroic exertions of the freedom fighters who were doing it for no pay, no reward – just for patriotism,” partly reads a December 18, 2019 statement released by State House.

According to Opondo, Museveni walked an average of 14km a day with stops to address people who lined the road plus visiting a few homes of the former fighters. This gives a total of about 84km, the entire distance Museveni covered on foot. But some journalists who covered the trek told this writer that Museveni walked a much shorter distance since he spent most of his time mobilizing political support.

“The initial plan was to address locals in the morning before setting off from the camp site, and we were meant to walk at least 28km before retiring in the evening. This was not to happen as local politicians mobilized supporters to wait for him along the road; so, the president resorted to addressing roadside rallies. Once the sun set, he would jump into his car and drive to the next camp site,” a journalist said.

On radio, Opondo said, “On the first day, the president encountered a lot of people along the road; that is the area he fought in, he considers it his third village.”

Explaining why he chose to drive for the bigger part of the trek, Museveni said he realized he would be misunderstood if he walked and ignored the crowds of people waiting along the road.

“It was [not like] that time when we had only to fight, then [walk] at night. Now we are walking during the day [and] the people are waiting for us. I am not going to pass them by and say I am just walking, that would be drama; I cannot pass by people, they would think that I am mad,” Museveni told journalists.

Museveni said the trek helped him reconnect with the bush war veterans – people that directly or indirectly supported his guerrilla war. On his social media platforms, he circulated images of impoverished, barefoot old people kneeling before him to receive cash handouts. He said he had discovered that some of the former fighters had not been compensated and were neither beneficiaries of the government-led anti-poverty initiatives like Operation Wealth Creation (OWC).

The images attracted wide public criticism of the president “for humiliating” his bush war comrades. In a tweet, his former physician, Dr Kizza Besigye, called for an end to the humiliation.

“After 34 years of the NRM/Museveni junta, this is what our people have been reduced to: kneeling before the Ssabagabe (“King of Kings”) in a line to get a small handout in a brown envelope! We must end this humiliation now,” Besigye tweeted. He accompanied his tweet with a video showing President Museveni in full military fatigues seated on a chair in the middle of a road handing out envelopes to elderly people.

After 34 yrs of NRM/M7 Junta, this is what our people have been reduced to:
Kneeling before Ssabagabe(“King of Kings”) in a line to get a small handout in brown envelop!

Government chief whip Ruth Nankabirwa is seen in the video dancing to a Bakiga folk song as Museveni’s handlers picked the old out of a small crowd by the roadside to receive envelopes. What Museveni didn’t know was that he was sending local politicians to ferry their impoverished constituents to points where he would find them.

At one stop in Mubende, Museveni ran out of envelopes and sent for more. Museveni said that much as dishing out envelopes is not the formal way of responding to people’s needs, he resorted to the method because most of the beneficiaries were physically drained and not actively involved in government poverty alleviation programs.

“They were part of the people who either supported us or were actively involved [in the struggle]. So, when they come where I am, it is not correct [for me] to just pass by and go, knowing that I will not come back after a long time. That is why I sent for these ones, I give something small. That was the rationale, the other groups have other channels of dealing with the poverty in their homes,” Museveni said.

12
0 #11 Jama 2020-01-16 01:31
This nostalgic comedy seems, like an apology to violence as a way of acceding to power at a period when the world is completely opposed.
Report to administrator
0 #12 A K Mukasa 2020-01-16 02:33
“...the heroic exertions of freedom fighters who were doing it for no pay, no reward just for patriotism” indeed after they seized power they handed it to DP which had legitimately won the elections and the freedom fighters returned home to resume their respective vocations.

I might as well also dream, given the statement released by NRM comes from fantasy land.
Report to administrator
0 #13 Jimo 2020-01-16 02:42
When you live in the city you feels like there is unti you visit the deep village that is when you will realise that there is poverty.
Report to administrator
+1 #14 MR 2020-01-16 08:07
This is again m7 carrying out campaigns even before the EC gives him the go ahead against the law.

Now for those envelops were on the ready as per his plan plus how the additional ones came quickly. Under which budget is that?

Lastly if m7 was giving brown envelops to those who couldn't be involved in government poverty alleviation programs shows a leader without a future plan but is short sighted.

Good leaders make policies that help the majority of the population to develop and not depend on short term hand outs
Report to administrator
0 #15 Ugthinker 2020-01-16 10:24
Quoting Jimo:

When you live in the city you feels like there is unti you visit the deep village that is when you will realise that there is poverty.

Which city? Poverty is all over Uganda, the difference could only be in the level of awareness of the observer! I sense poverty even when interacting with those with money!

Ugandans are poorer and empty than they have ever been!
Report to administrator
+1 #16 Wooden K. 2020-01-16 12:54
Kale nno , we thank OBSERVER for that shot video. We have decided to preserve it in museum archives for the future.

This is again m7 carrying out campaigns even before the EC gives him the go ahead against the law. ...

MR., in Kampala; many of Mr. M7's 2016 campaign posters have not been removed and new ones are put up to replace the faded ones.

Some of the posters are prominently pasted on Police Post Booths: e.g. the one at Nsambya stop lights .

At the Kampala Main Post office (Speke Road), they are hanging from trees and occasionally replaced with brand new ones. There is BIG one inside one of the offices in the CPS, which you see from the road.

But the Electoral Commission has turned blind eyes to such irregularity and NRM arrogance and disrespect for campaign regulations.
Report to administrator
0 #18 Basabra 2020-01-16 22:50
The wise man has said it well.he cannot pass by withouth giving those elders something.they are physically drained and old to take part in the govt poverty alliviation programes.

much respect to museveni.we should learn to appreciate our God chosen leaders as africans
Report to administrator
+1 #19 MuwangaTheUgandan 2020-01-17 00:42
Quoting Labson:

What I clearly don't understand is the absolute change of cards here. We understand that during the bush war, the places where M7 is now walking were robust with wealthy people/ farmers who greatly helped to facilitate the bush war in one way or another.

On their wealth did the NRM/NRA thrive and back then those people were not the ones kneeling to beg but it was the revolutionary soldiers. So, what has changed these cards? Why this change when we hoped (supported) for better after the former regime?

Well said. The scenes of our elders going on their knees for some "ka money" are heart wrenching.

Very sad indeed. I pray and hope their lives will be better one day.
Report to administrator
12