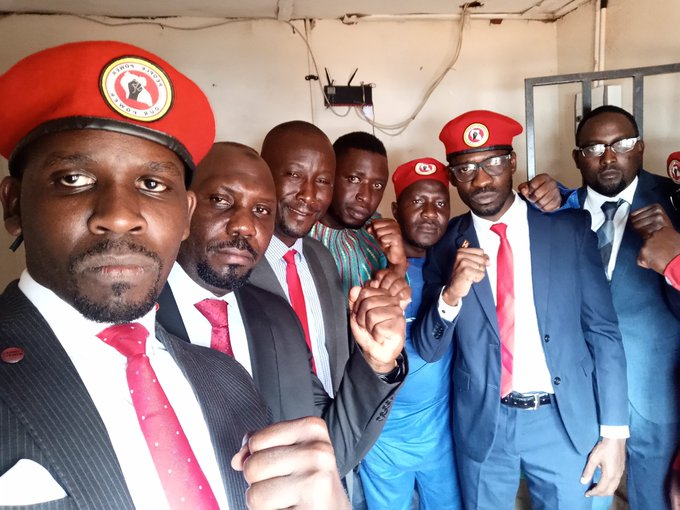 Concerned by the persecution of his supporters, Kyadondo East MP has cancelled his People Power pressure group’s scheduled consultative meetings in the northern district of Gulu.

Kyagulanyi, who has already declared a presidential run in 2021, had scheduled his second consultative meeting with his supporters from Acholi region in Gulu on Tuesday. His ‘People Power’ activists had booked De Covenant, a hangout in Layibi Division in Gulu municipality to host the consultations.

But Kyagulanyi cancelled the meeting. He told journalists at his office in Kamwokya yesterday afternoon that his advance team had told him that their venue for the meeting had been sealed off by police and that majority of his supporters had been intimidated.

He however, said he will proceed with his consultations in Lira district today, Wednesday (today's meeting has also been declared illegal by security officers in the district). Kyagulanyi says police blocked their Gulu meeting on grounds that the venue was an open ground. According to Kyagulanyi, police conducted night raids and grabbed several documents and motorcycles from his supporters.

Busiiro East MP, Medard Lubega Sseggona who is also the group lead lawyer, said police has been asking organisers of Kyagulanyi’s consultative meetings to provide services, which should entirely be provided by the force.

Sseggona says police has since Monday arrested several activists and lawyers. He named Counsel, Shamim Malende who was reportedly arrested when she visited Kasangati police station to rescue colleagues. Joel Ssenyonyi, the group spokesperson, is still in police custody, according to the legislator.

According to Sseggona, there is no specific number of people that a presidential hopeful like Kyagulanyi is required to consult. He says police shouldn’t target Kyagulanyi because he has many supporters.

Benjamin Katana, a People Power lawyer, says when the group notified the Electoral Commission, they were cleared but urged to notify local authorities and police in the areas they will hold consultative meetings.

Katana says the police demand for Kyagulanyi’s group to produce firefighting equipment, traffic guides and sniffer dogs are not only unreasonable but also a lame excuse. He argues that citizens have already contributed to these requirements, which are in police control.

The Kira Division police commander, Micheal Kasigire who appeared with riot police at the venue of Kyagulanyi’s presser roundly denied the allegations leveled against the force. He says the group should prove their allegations if they are to be believed by the public.

Kyagulanyi is expected to provide a traffic or assembly plan, public safety plan with ambulances and fire-fighting equipment, a demand he and his lawyers have rejected.

And civil society organisations (CSOs) under the National NGO Forum have demanded that courts of law should help clearly spell out the powers of the Police Force (UPF) under the Public Order Management Act (POMA).

According to CSOs, the act gives police ambiguous powers that need to be spelt out clearly. Their demand comes on the coat-tails of a police ban on political gatherings in private homes.

Charity Kalebbo Ahimbisibwe, the head of communication and advocacy at Citizens’ Coalition for Electoral Democracy in Uganda (CCEDU), says police often interpret POMA to suit partisan interests. According to Ahimbisibwe, police has used power to harm innocent Ugandans and that may negatively affect the 2021 general elections.

“After what happened yesterday, how do you expect women to confidently walk to the polls and cast a vote if a simple consultation meeting ends in death,” Ahimbisibwe asked.

The act, which came into force in 2013, has drawn sharp criticism mainly from opposition politicians. According to CSOs, if nothing is done to rein-in police, the forthcoming elections are likely to be violent. Henry Kasacca, the executive director of Dialogue and Democracy Training Center, says the current law gives police a lot of unchecked powers.

He says some of the conditions that police sets for those intending to hold public meetings are very unrealistic. Sarah Bireete, an associate director at the Center for Constitutional Governance, says something needs to be done to rein-in police because threats of future arrests for holding meeting are illegal.

Birete says that court needs to come out and make a ruling on the constitutionality of POMA.

WANAINCHI those ugly faces are coming for you big time. By the time they are done with you, your face will b ugly too.

Just tribal leaders standing cown to give chance to UNITY, will shut every enemy of Ugandans up!

But maintaining the tribalistic system gives them power over us/our country fromed by our tribal lands!

Why not start with Acholi cutting the penis of their uneducated selfish brainless tribal leader OFF?!
Report to administrator
0 #12 Akot 2020-01-09 21:54
WADADA rogers, understood, but,

It's not election in Uganda in which every institution is controlled & tribalistically divided & ruled by Museveni that will bring change of leader!

This is clear as day light as mp Bobi Wine doesn't even have right to campaign/meet Ugandans!

Museveni/nrm can only be thrown out if Ugandans want to & they must know only bringing down the tribalistic system & UNITY will block Museveni, then army/police will have to decide too!

Until Ugandans take action, the outside world will continue in silence, because the couqntry belongs to Ugandans who alone have the power to decide who leads them, how, for how long!
Report to administrator
0 #13 Lakwena 2020-01-10 10:18
Quoting Wainanchi:

Hoooohooohooo!! Oppsy daisy!! Everyone is entitled to his/her own opinion!!

But Wainanchi, where were you on Wednesday 8th 2020, when Mr. M7 with no shame, told his audience in Luweero; how he commanded the robbing of the UCB Masindi Branch?

Including Perjury, murder, torture, animal cruelty, treason, terrorism, "erection rigging" foreign invasion of other countries, malicious prosecution of his opponents like Dr. Besigye, sponsoring terrorism coup, etc.; which crime in the law books of this country and international laws, has Mr. M7 not yet committed?

In other words Mr. M7 is a self-confessed capital offender, who will be officially charged, prosecuted and executed according o the law of the land.

And you Wainainchi, will also be charged, prosecuted and hanged for being an accomplice, for cheering, aiding and abetting Mr. M7's capital offenses.
Report to administrator
0 #14 Wainanchi 2020-01-10 14:19
@ Lakwena-- Have you heard of the word REVOLUTION??

How do you think changes could be done without not using force and other strategies/?Besides how NRA started the war with only 27 rifles to become one of the strongest armies in Africa and wider?

Big things start with small steps and in order to liberate Uganda , NRA and NRM applied their ideology, coupled with good practices and got full backing and support from Uganda people.

That will be enough for you now, and I could go much broader than that and enlighten you.

Just call my name and ask questions. Jesus said knock and the door will open, and little Wainanchi who extremely strongly belives in the Living God Jesus Christ is telling you..dear Lakwena just ask Wainanchi if you are not quite clear of what to think and reason and Wananchi ,that good and God loving and fearing person and supporter and admirer of Uganda Greatest Son Yoweri Kaguta Museveni will explain you what you do not understand.Happy New Year!
Report to administrator
0 #15 Wainaichi 2020-01-12 04:23
@ Akot. Stop bombing us with your idiotic ideas and cries to break up and destroy Uganda!!

By breaking up this small and beautiful country you would cause much more frictions and rivalry amongst various groups.

Dibt you see even now how some leaders behave and worry only about themselves and their interests How would you achieve progress by breaking up the United country.

Look at other examples in the world where when unity was broken various fractions started mutual fighting and destruction and hatred Do not fool us any longer with time every day foolish slogans and stop polluting our minds with your idiotic and bloody slogans to destroy Uganda and to give us to diha,ie foreign masters to rule us with iron fist like Brutishcplonialust to whomever our grandfathers had to lick their boots and crawl into submission.

Uganda is modern and developing democracy and you go and Selma tour idiotic ideas to fools.I doubt anyone will follow you.
Report to administrator
0 #16 Lakwena 2020-01-13 10:14
Quoting Wainanchi:

@ Lakwena-- Have you heard of the word REVOLUTION??

How do you think changes could be done without not using force and other strategies/? ...

Wainainchi, by what you have said: force works; you are encouraging Ugandans to use force (violent revolution) to get the change they are desperately looking for.

In other words, Mr. M7 and you will not complain if tomorrow someone started small using force (27 guns) and overthrew Mr. M7 and cabal like Wainainchi.

But Wainainchi, violent people are irrational people. That is why they are criminals in nature and destructive like you and Mr. M7. Because you are mentally weak, you can't reason (convince), hence resort violence.
Report to administrator
0 #17 Lakwena 2020-01-13 10:22
In other words Wainianchi, all revolutionaries: Stalin, Mao Tse Dong, Pol Pot, Fidel Castro, Kim Il Sung, Museveni, Amin, Mobutu, Qaddafi, Bokasa, Hitler, Mussolini, etc., etc. were all irrational criminals who destroyed, not only hundreds of millions of lives, but properties and countries.
Report to administrator
12