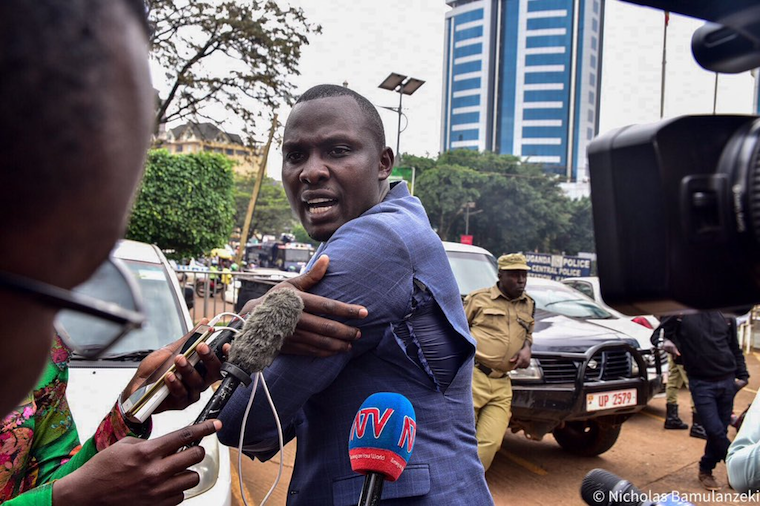 A peaceful procession by journalists to police headquarters in Naguru against police brutality ended prematurely as police once again showed its ugly and brutal side by firing tear gas and live ammunition.

Last week Uganda Journalists Association (UJA) president Bashir Kazibwe announced a media blackout on all police activities and a procession to police headquarters in protest against what he called well-orchestrated and coordinated brutality against journalists since the Makerere students protest that broke out on October 22.

The students protest against a 15 per cent cumulative tuition increment for the next five years is now into the third week but journalists who have been covering the protests have faced it rough with police. They have been particularly targeted reportedly on the orders of the university management which claims that the journalists want to tarnish the image of the university.

Daily Monitor's photojournalist Alex Esagala and Geoffrey Twesigye, a photographer with NTV Uganda and Lawrence Kitata of Vision Group were hit with tear gas canisters by the police. Esagala and Twesigye ended up being hospitalised for several days. Earlier Chris Ssemakula from BBS TV, Canary Mugume of NBS TV and Davidson Ndyabahika Uganda Radio Network were also attacked by the police force.

Meanwhile, the other group of journalists led by UPPA president Moses Mulondo and HRNJ National coordinator Robert Ssempala was blocked by anti-riot police while approaching the police headquarters on grounds that the procession was illegal.

In the process, Kazibwe, Daily Monitor journalist Damalie Mukhaye, KTV's Siraje Kiberu and UPPA president Moses Mulondo got arrested and were taken to Central police station (CPS) The now charged journalists stormed CPS demanding for the immediate release of fellow journalists. Police cowed to the pressure and released the journalists.

A section of journalists who gained access to CPS are demanding to meet the IGP not any other low ranking officer #PressFreedom #JournalismIsNotACrime @observerug pic.twitter.com/NwnfncNrla

Fused by a human chain link, the group was later asked to select four representatives to deliver the petition to the IGP. They settled for 10 after negotiating with the security.

Kampala Metropolitan Police spokesperson Patrick Onyango said that no journalist had been arrested. Those who were in police custody were held as a security measure, he said.

In the aftermath, Mulondo said that the procession had been cleared by the inspector general of police, despite being blocked. He, however, added that police action will not deter them from fighting for press freedom.

They interpret every demonstration, procession or gathering is detrimental to the regime.

I hope the journalists are mature people who ought to be welcomed and listened to by the police headquarters. But look here: police only came out to fight them. Sheer national shame.
Report to administrator
+1 #2 Ugthinker 2019-11-04 21:21
Uganda’s journalists underestimate their own capabilities, no wonder they are violated to this level!

Just like any other sector under the NRM, quality of journalism has been very much decimated due to transactional journalism, posturing, infiltration etc.

If journalists were serious and dedicate only one week exposing only those commanding their battering, we can surely see a difference.

Just like many in the regime these commanders are sitting on many corruption scandals, crimes, whose exposure is just one way of turning tables!

If journalists can change government, what about just taming the Uganda Police?
Report to administrator
+1 #3 Akao 2019-11-04 21:35
When are they investigating how much is spent on teargas? Poor policemen, who themeselves don't have decent places to rest their head at night, are very poorly paid, are exposing themselves to teargases everyday

I hope donors are seeing all the teargassing happening.

They should stop sending more money to Uganda so that the government come down sooner. As a matter of fact Uganda needs sanction from other countries for the abuse of its citizens
Report to administrator
+1 #4 kirya 2019-11-04 23:14
Rule by the gun
Torture with a gun
Kill with a gun
Capture power with a gun
Threaten with a gun
Loot Uganda with a gun
Intimidate opposition with a gun
m7 the gun dictator
m7 worships the gun!!
Report to administrator
0 #5 kabayekka 2019-11-05 01:40
This is the chance for the various sober organizations in this country to come out and fill up all the prisons in the country.

That is when the judiciary will work a bit faster to pass judgement over the present increase in criminality.
Report to administrator
-1 #6 Amooti Mugi 2019-11-05 06:04
Quoting Akao:

When are they investigating how much is spent on teargas? Poor policemen, who themeselves don't have decent places to rest their head at night, are very poorly paid, are exposing themselves to teargases everyday

I hope donors are seeing all the teargassing happening.

They should stop sending more money to Uganda so that the government come down sooner. As a matter of fact Uganda needs sanction from other countries for the abuse of its citizens

I disagree....Sanctions may hurt innocent, poor majority who who won't know even why they r suffering.!!!!
Report to administrator
0 #7 Stephen Mung’oma 2019-11-05 16:26
Ugandans are too cowardly to go to prison. We are are a special breed of stupid.
Report to administrator
0 #8 Zaitun 2019-11-06 10:39
Amooti Mugi, Ugandans are already poor, desperate for change, bearing the dily military torture in the name of law enforcement!

These are the very people who financed Museveni's ugly warfare. It's high time they stopped giving these lunatics financial aid- which often ends in private bank accounts in the West.

Indeed, our police officers are bewitched and have nothing better to offer the country than violating people's basic human rights.
Report to administrator