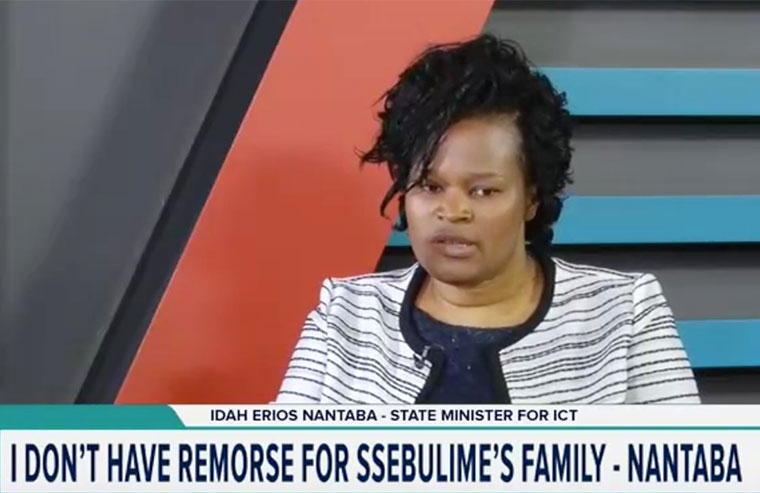 From March 24, 2019, when a police officer shot and killed 40-year-old Ronald Ssebulime, accused of trailing, with intent to kill minister IDAH ERIOSI NANTABA, she has told bits and pieces of her side of the story.

Ssebulime was summarily executed in broad daylight and Nantaba insists the man was killed to shut him up though some claim he was a victim of mistaken identity. When she finally tells her full side of the story— when she reveals all the sordid details and finally connects the dots –the country will probably get a full portrait of who the real mafia is in this country and how it operates.

In another one-page missive emailed to The Observer on Monday, Nantaba, the minister of state for Information and Information Technology and National Guidance, claims a very respected army general in the country who she cannot dare name publicly and some Special Forces Command soldiers are bankrolling her political nemesis in Kayunga, Moses Karangwa, to neutralize her.

She says calling Karangwa her political rival is a ruse being used to veil the gentleman’s evil deeds. She says the real beef between the two stems from her determination to fight land grabbing not only in Kayunga district but across the country.

“These land grabbers upon realizing that I was preparing to unseat the NRM chairperson [Kayunga district], they also asked Karangwa to contest for the same position so as to disguise the land grabbing fight for a political one. Almost everyone believes that the war between me and Karangwa is a political one. That is how mafias fight...” Nantaba writes.

Karangwa has powerful people, military generals who are backing his land grabs not only in Kayunga but in the whole country.

There are some Special Forces Command [SFC] officers; one called Charity and the other Akampulira who for a long time have been storming my home. One time they invaded my home with soldiers and guns. One soldier in plainclothes told my inquisitive neighbor, who asked to know what soldiers wanted from me with all those guns, – that I was also going to die like [Andrew Felix] Kaweesi [the former Assistant Inspector General of Police] killed near his home in 2017].

Frightened, my neighbor rushed and told me what the soldier had said. We spent two weeks indoors, fearing for our lives. Later they grabbed my bodyguard Tugume and beat him badly. I told the president what had happened to my bodyguard. He responded quickly and asked Sabiiti Muzeyi, now the deputy Inspector General of Police, where he had kept my bodyguard.

Sabiiti told the president that Tugume had assaulted some people in Kayunga in a village called Kirindi. The president asked me to take the two men to him who had been coached by Akampulira to lie that they had been assaulted by Tugume.

One confessed before the president that they were bringing trumped-up charges against Tugume so that he can be withdrawn from me and other bodyguards deployed. Later they deployed a police truck full of soldiers at my home in Busega led by a one Akandiho.

He told me to inform him right away if any other attempt is made to withdraw Tugume. Since then, they have never come back. I knew that generals used Karangwa when a policeman tried to shoot me in October 2015, at night at Kayunga police station.

It was Karangwa commanding the police to kill me. My brother Amos Lugoloobi [Ntenjeru North MP] asked me to go to the police station to see how the ballots were being handled. He had got information that Karangwa was trying to rig for those he supported.

When I arrived, Karangwa ordered the police to shoot me. One actually pointed the gun at me and tried to kill me but a certain man shouted; don’t kill the minister. Before I knew it, I was on the ground. Actually this policeman fired several shots in the air.

Later another police officer sprayed poison on me. I was hospitalized in Kenya for two months without people in the country knowing because they stopped the media from broadcasting the story. The time I spent as state minister for lands, I fought many big people among who was Karangwa who wanted to steal people’s land.

What surprised me most is that every time I tried to help those Karangwa had evicted from their land, I would receive a phone call from a general who this country fears a lot and who no one can dare talk about publicly who advised me to tell the president to put money in the Land Fund to pay for the land Karangwa had grabbed. Some of this land included that of Luyombya.

About 1,000 families had been evicted from that land. I informed the president about the general’s proposal and that is how I discovered that taxpayers’ money is used to compensate for grabbed land. I didn’t support this move and I asked the president to reject the suggestion. Some of my bodyguards were used to stop me from holding meetings about land, which had been grabbed from people.

These would connive with people in State House who tried to stop us from intervening in land grabbing cases. One of my bodyguards, name withheld, was often used to spy on my movements. Actually, impeccable sources told me that this person was in the same area on the same day Ssebulime was suspected of trying to kill me.

Currently, this person was transferred from Nakasero to Entebbe airport. I was told there was a plan to plant narcotics in my travel bag so I could be arrested on my way out of the country. One officer at the airport actually urged me to travel only with a handbag to avoid falling in trouble.

This is how I realized how well-placed the generals working with Karangwa are. There are many people who have lost their lives in Kayunga but Karangwa has never been charged with any offence...Now where is politics in all this?

WHAT KARANGWA SAYS ABOUT NANTABA

Both Nantaba and Karangwa control a group of politicians in Kayunga. Nantaba relies on her popular appeal while Karangwa leverages his cash. In 2015, when the two politicians competed for the position of NRM district chairperson, police had to fire tear gas to disperse their supporters. Karangwa won.

Karangwa in 2016 told The Observer on the sidelines of a rally that his dispute with Nantaba emanates from a business transaction the two had after the 2010 NRM primaries. He said he lent her some money for the 2011 campaigns.

“I gave her Shs 20 million. When I started demanding my money, she turned around and started saying that I was grabbing land. She just turned embarrassment into anger,” Karangwa said in Luganda. The dispute between these two bubbles to the surface every now and then. The NRM must find a way of resolving this protracted quarrel.

The common thing to do in order to get rid of the problem. She is now a liability not an assert to the mafia regime.

Naive girls with daddy issues always try to rely on older powerful rich men for security but in the end after using them, they are dumped (or get killed) like used condoms.
Next in line is one sycophant and overzealous Anite
Report to administrator
0 #12 Kikomeko 2019-10-31 19:37
Ggwe Nantaba Read Arondas Assasination Plot to Understand things..Aronda was a Bush War Veteran opposed to the Muhoozi Project...He Took incriminating Evidence of his Son Shooting and killing one would be Plant to Soil his Arondas name to M7.,think of Plan B or your Dead..
Report to administrator
12