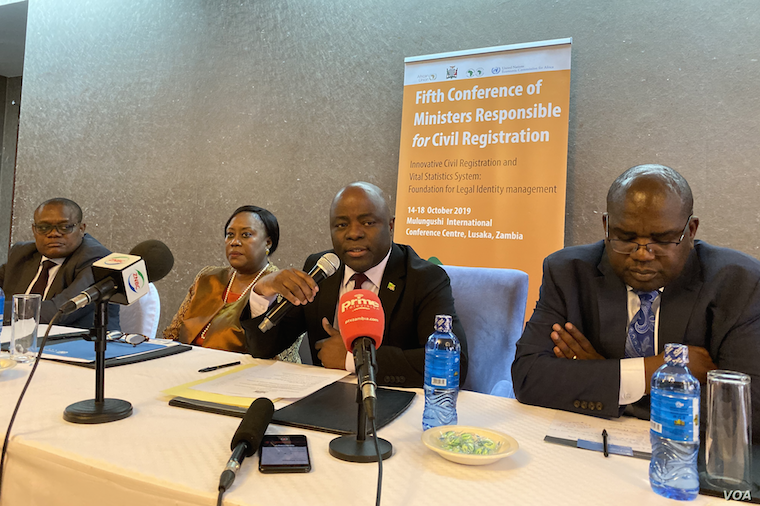 AU and UN officials are meeting in Lusaka for the Fifth Conference of African Ministers Responsible for Civil Registration, Lusaka, Zambia

The United Nations says about half of all children in Africa are not registered at birth, a lapse that prevents them from accessing essential social services such as health and education.

The UN says a number of African countries are working towards addressing this problem, but the countries say resources to make that a reality are scarce. According to the United Nations, the problem of unregistered children in Africa is worst in rural areas, where women give birth at home and don't bother to register the child with the government.

Speaking on the sidelines of an ongoing conference of African ministers responsible for civil registration, Coumbia Mar Gadio, the head of the UN in Zambia, said the problem makes it hard for such children to build prosperous lives.

Oliver Chinganya is the director of the African Statistics Center at the UN’s Economic Commission for Africa, one of the agencies which organized the five-day conference in Lusaka, together with the African Union.

He says over the past eight years, the UN has noticed a “tremendous improvement” in registration of African children at birth in 42 countries.

“What we have noticed is that 54 per cent of the countries, have digitalized their civil registration across the continent," said Chinganya.

"We have also noticed that 22 per cent of the countries, have now managed to digitalize their national ID systems. Which is a great improvement compared to pre-independence, even some 20 years ago.”

Zambia is one the countries that has digitalized their civil registration system. But Stephen Kampyongo, Zambia's minister of Home Affairs, says the southern African nation and the rest of Africa still have a way to go.

“Despite the progress that has been made in many [African] countries, we still have this identity gap which is quite eminent. This is because of historical background here and geographic challenges we have," said Kampyongo.

"We still have rural parts of African members states which are are geographically challenged access. We are discussing ways and means to address some of those challenges."

He said one solution might be mobile registration - where officials visit isolated places where there are no clinics, which makes it difficult for families to register their children. He said UNICEF is helping Lusaka to make that a reality.