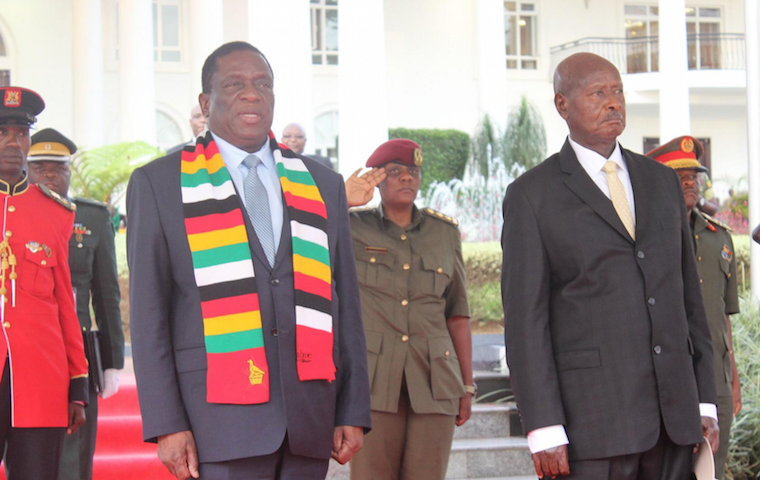 President Yoweri Museveni has praised the Chinese government for extending loans to Uganda and Africa where other development partners have been hesitant.

Museveni was fielding questions at a press conference that he jointly addressed with visiting Zimbabwean President Emmerson Mnangagwa at State House Entebbe ahead of today’s Independence Day celebrations.

Responding to questions from journalists on Uganda borrowing a lot of expensive loans for infrastructure development, Museveni said China is giving Uganda loans for infrastructure projects previously neglected by other partners. According to Museveni, this has enabled Uganda to use its money for other things, and at the same time use the loans which have a longer repayment period for development.

He said the country’s loan ceiling is still manageable and there is no cause for alarm. The president also said in order to develop the economy, factors that influence the cost of production like transport, high-interest rates and electricity need to be addressed.

He said China is the only partner that has agreed to lend Uganda, Kenya and Tanzania to construct the railway and roads.

"The Chinese whom you [journalists] seem to be very excited against because you’re being influenced by some other people, are the only ones who have agreed to lend us money to develop the railway in Kenya and in Tanzania, to develop the electricity. On the issue of the cost of money, we’re doing it ourselves. But even for the railway, we would have done it ourselves but if there is a loan, then I take advantage of it and then I use my own money to do other things. Now, are we borrowing too much? No." said Museveni.

According to the International Monetary Fund (IMF) and World Bank, Africa is heading towards a debt crisis. Uganda's debt has hit Shs 42 trillion. Like most African countries, China is the largest creditor to Uganda, disbursing 39 per cent of the total credit in the financial year 2017/2018, surpassing the traditional creditors such as the World Bank (21 per cent) and the African Development Bank (8 per cent).

In his speech, Mnangagwa, thanked Museveni for honouring him to preside over this year’s Independence celebrations, saying Southern Africa has a lot to learn from Uganda and East Africa. According to Mnangagwa, when Uganda got independence early in 1962, it inspired some Southern African countries to push for the same.

He praised Uganda for contributing to the development of Southern Africa materially and intellectually, adding that several members of his cabinet are graduates of Makerere University.

"Independence was to have Africa free to have the economic freedom, but today we now have a duty as the current crop of leadership in Africa to develop our countries. To improve the standard of life of our people. To trade amongst ourselves, to modernize all aspects of life to ourselves. Our task now is to cooperate and modernize our respective countries." said Mnangagwa.

The two leaders also signed a joint communiqué and agreed that sanctions against Zimbabwe be lifted immediately.

China with it mass population has no resources but depends on some 3th world dictatorial countries and the Western powers through the intellectual property thefts and unfair trades.

That weak colorful androgynous Emmerson (with a lady name) should be careful before he goes in bed with Museveni to soon.

Museveni has no more friends left so he prays on the new naive ones. Just like a predator he is. Watch your back always when dealing with him.
Report to administrator
0 #12 WADADA roger 2019-10-11 18:05
I dont know if Museveni ever reads these threads but i think he needs to create time to read a book called " The confessions of An Economic hitman", he will understand that any borrowing whether from China or elsewhere is bad for the country.
Report to administrator
0 #13 Akot 2019-10-11 19:33
kirya, agreed, but,

What we forget is that Museveni has nothing to lose, whatever come may, as he has no tribal land in the zone, has already destroyed but looted enough tolive on any where he will chose, just like Amin!

Is this so for Ugandans & how will tribally divided Ugandans start, as Museveni will also die 1 day?

Yet, even Independent Tribal States NOW, will save Ugandans from the mess, may be war, when Museveni will be no more!
Report to administrator
+1 #14 Akot 2019-10-11 19:36
Quoting Lakwena:

What pride do Ugandans have when Mr. M7 invites the president of a failed state like Zimbabwe on our 57th independence anniversary, as the guest of honor?

What was worth listening to from president Emmerson Mnangagwa?

from Al Bashit of Sudan to Emmerson Mnangagwa of Zimbabwe, under Mr. M7's 34 of thuggery, Uganda has sunk so low that we are easily spotted and identified with all the rouge and worst human rights violating countries.

China which Mr. M7 now postures with and praises for her loan to Africa is a dirty country.

To whom does Uganda fromed by tribal lands, belong?

How can Ugandans be tribalistically ruled, thus doomed under Museveni for ever, when the demon has no tribal land in their country, thus no land base?

Once tribal leaders bring down the tribalistic system & Ugandans UNITE against Museveni, who will erase them from the country?

Why are Ugandans slaves of a migrant they were kind to give shelter to, but have let him make them slaves, foreigners, without say, uncelcomed in the country?

Ugandans have mp Bobi Wine & tribal leaders MUST stand down & UNITY will give chance for the next move!

Is Bobi Wine not good enough because he is from a tribal land, thus unfit to be our common leader?

Ugandans missed chance with Dr Besigye but Bobi Wine is still fighting & needs every Ugandan & this means we MUST say NO to the tribalistic system & our UNITY around Bobi, will show Museveni way OUT!

Why are Ugandans ensuring Museveni rules them for life & what will we do when the demon will be no more, but will leave us in the inhuman tribalistic system?
Report to administrator
0 #17 Akot 2019-10-11 20:05
Kirya put it clearly & we shouldn't forget it!

[Kirya
Uganda needs to get rid of the self imposed bushmen who are in for themselves stealing elections, looting the country and abusing the population.

A change in leadership will open up space for other important agendas. m7 and his family of thugs have to go!]

Ugandans MUST give themselves, their childre, grand kids chance by UNITING NOW to THROW MUSEVENI OUT!

Development based on loans is a non starter! It is crazy and uncalled for as Uganda will soon become part of China!

fellow Ugandans have the balls to challenge the crazy man in the state house!
Report to administrator
12