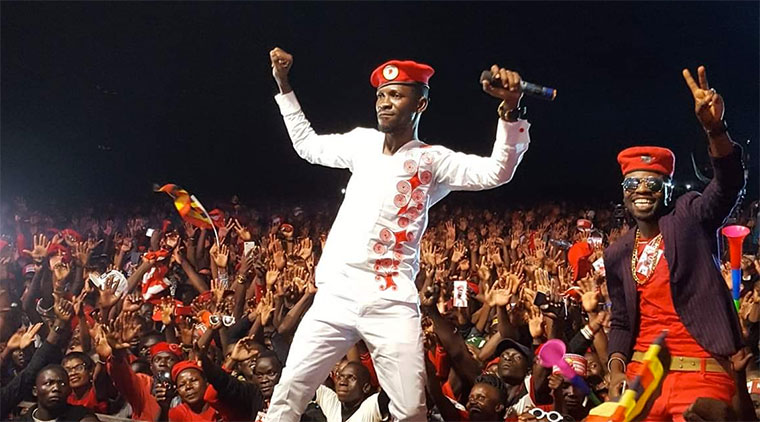 Bobi Wine performing at a concert

"The serves to inform you that the notice to the inspector general of police has remarkably deficiencies, which do not guarantee lawfulness, safety, security for the public and organisers," reads Ochola's letter by AIGP Asuman Mugenyi.

Kampala Metropolitan police spokesman, Patrick Onyango, quoting Ochola's letter said police in Kampala won't be in position to provide adequate security since police officers will be at the independence celebrations in Sironko and other authorized venues.

Kyagulanyi had scheduled a music show dubbed 'Osobola' at his One Love Beach in Busabala in Makindye Ssabagabo Municipality in Wakiso district.

As police announced the cancellation of the concert, the singer turned politician was doing rehearsals at his music studio at Fire Base in Kamwokya.

"Regretfully, therefore, the staging of the said concert cannot be allowed to proceed until the concerns raised above are satisfactorily addressed," Ochola adds.

Onyango said police won't allow an event that has fallen short of the guidelines as outlined by IGP to take place. He urged the public not to waste time going to Busabala because the event will not take place.

On April 22 this year, police stopped Bobi Wine's concert on grounds that he had not met the laid down procedures. Field Force Unit unleashed brutality in foiling Bobi Wine Busabala concert in April where his car windows were smashed with a hammer and he was pepper-sprayed.

According to Kyagulanyi, more than 125 music concerts of his have been canceled or blocked since he joined politics as Kyadondo East MP in May 2017.

In this case the tse tse fly is perched on the tortoise's back in vain. Ugandans are good at barking,but when push comes to the shove, we're are always shell-shocked
Report to administrator
12