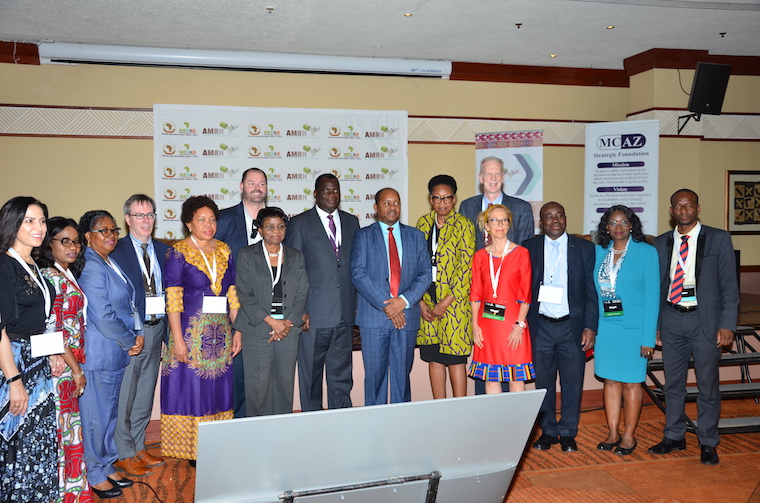 Health experts and speakers pose for a group photo in Zimbabwe

The over-reliance on imported medicines has made Africa’s ailing health sector susceptible to the vulgarism of counterfeit medicine, with new medicines taking between 5 and 10 years to reach the African continent, experts have said.

Over 90 per cent of generic medicines in Africa is still being imported from mainly India and Europe, and in his keynote address at the opening ceremony of the 4th Biennial Scientific Conference on Medical Products Regulation in Africa (SCoMRA IV), at Victoria Falls on September 30, Prof Kelly Chibale, a professor of Organic Chemistry at the University of Cape Town, said new generic medicines take between 5-10 years from its date of manufacture to be introduced in Africa.

Prof Chibale, the founder and director of Africa’s first integrated Drug Discovery and Development Centre contends that there is an urgent need to move towards more innovative approaches based on the science and the supporting data for regulatory decision making.

He said such a shift in mindset will make reliance and harmonization more effective and eliminate redundancy and unnecessary delays in the review and approval process.

“To find a new medicine, you have to kiss many frogs,” Prof Chibale said, adding “Africa is not short of talent. Since independence, we have been sending people to study. But when they come back, they are not given room to practice what they have learnt. Unless we do clinical trials, all will be wasted, and crocodiles will eat the money.”

Prof Chibale, further stated that Africa’s population has been neglected and that it is only through the political will that the sector will be revamped.

The Zimbabwean minister of Health and Child Care, Obadiah Moyo, said lack of locally produced goods puts the whole continent at risk as it faces high rates of diseases yet the health sector is under-resourced. Moyo said 80 per cent of Zimbabwean medicine is imported into the country.

“We are threatened by substandard medicines,” Moyo said. “It is important to build capacity for medicine and harmonize our regulations so we are able to independently manufacture our own drugs.”

The World Health Organisation (WHO) coordinator, Regulatory Systems Strengthening, Department of Essential Medicines and Health Products at WHO headquarters in Geneva, Dr Mike Ward, said WHO is supporting regulators on how they can take the advantage of the innovation.

“We are supporting harmonization, we are supporting projects within Africa, and we are also developing the in competencies in Africa. We shall ensure that there are no shortcomings for any development. All things have to be online and on time and we are working within the framework of the AMRH” Ward said.

The head of Health Programs at the African Union Development Agency (AUDA-NEPAD), Margaret Ndomondo-Sigonda, said developing pharmaceutical manufacturing plants will make Africa get up from its limited access to medicines.

“One of the key elements that will ensure the promotion of local production of pharmaceuticals in the continent is to provide an enabling regulatory environment. The pharmaceutical sector in Africa has a huge potential.” Sigonda said.

AMRH is an initiative created to assist African countries and regions to respond to the challenges posed by medicines registration – as an important, but neglected area of medicines access. It seeks to support African Regional Economic Communities and countries in harmonizing medicines registration and is seeking interested donors and other stakeholders that can help offer the requisite support

The overall goal of SCoMRA IV is to stimulate discussion on progress made over the last decade of regulatory harmonization and alignment of regulatory networks, identify regulatory challenges facing Africa and lessons learnt, and propose a path forward for the next decade with a special focus on the new AMA.

By the time it's sold as generic in the 3th world countries it has already been there for more than 20 years.

But the corrupt M7 regimes want to kill Ugandans slowly with sugar(growing sugar canes) and causing obesity by drinking milk or dairy products.

Milk and sugar can be obtained from soya. beans..Some people are lactose intolerant and can't drink dairy milk and feel bloated ( flatulence and gassy) with big stomachs.
Report to administrator
+2 #2 Lakwena 2019-10-04 16:41
If we can't make our own medicines and receive the latest medicine after has been in existence for 10 years; let alone, have our own technology to do so; what is this African kajjanja that the West should leave Africans to solve their own problem?

In other words, false pride is our worst enemy! We can't solve almost all our problems, but when caught red-handed and pants down abusing the rights citizens, we have such a big mouth to tell the West to leave us alon to solve our problems

E.g. our current leadership can't fight corruption and the impunity of human rights violation. But as soon as the US government started denying the culprits Visa and clamping on their illicit bank a/c and properties in the US, the regime cries foul.
Report to administrator