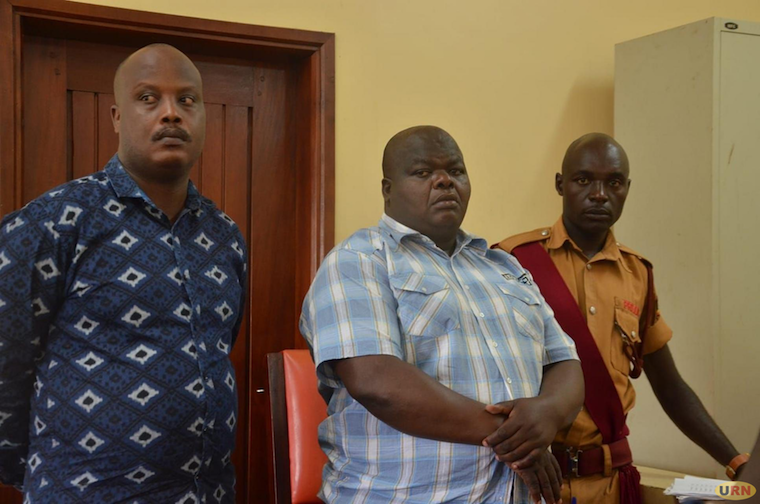 The two managers first appeared before Entebbe Grade One magistrate Phiona Birungi, a fortnight ago, before whom, they were charged with five counts of human trafficking, forgery and obtaining money by false pretence. They allegedly forged documents of the ministry of Gender, Labour and Social Development.

The prosecution alleges that on February 12, 2019, both Kunywana and Kyalimpa, between Kampala and Entebbe international airport tried to traffic 50 people out of the country contrary to provisions of the law that barred trafficking in persons.

They are also charged with forgery of documents and signatures from the Ministry of Gender Labour and Social Development. The documents included signatures of Lawrence Egulu, an officer in the ministry of Gender, allegedly approving the planned travel of up to 50 people who were being taken out of Uganda for domestic jobs in the Middle East.

Today, magistrate Babirye said that the two have a constitutional right to or bail and that they still enjoy the presumption of innocence until proven guilty.

The sureties included Gordon Mugyenyi, the managing director of the same company and Richard Ssembuusi, also an employee of Middle East Consultants.

The officials were arrested during operations mounted by both the police and the State House Anti-corruption unit headed by Lt. Col. Edith Nakalema. The operation targeted at least 30 companies involved in labour externalization, the majority of which have been accused of mistreating Ugandans.

Uganda is a signatory to international law on slave labour, these guys should remain inside until they spill the beans on their "tricks".
Report to administrator
+1 #3 Lysol 2019-09-16 22:31
The corrupt regime is doing everything to export our youngsters to the Arab lands only to be exploited and abused.

Many end up dead. It's the same thing with the so-called peace keeping in some failed States whIch cannot govern themselves Just to earn a few dollars. What a shame!. Uganda has become too low and cheap
Report to administrator
0 #4 WADADA roger 2019-09-17 06:55
look at the size of the bosses of middle east consultants, they are all fat as a result of illicit wealth gotten out of selling other human beings into slavery, the one on the right hand size is the size of a water drug or would you rather call it a sack of potatoes.

These guys should have been left to rot in jail, I now know why Museveni is opposed to bail
Report to administrator
0 #5 Lakwena 2019-09-17 15:53
In other words, look at the pot-belly blood suckers. Because of their diabolism, they have bloody, red-shot eyes like those of Dracula.

Because of the suffering and agony they subject the desperate unemployed Ugandan youths and also their relatives and/or friends; preferably they should be disemboweled of what they have been swallowing.
Report to administrator
0 #6 Lakwena 2019-09-17 16:13
[quote name="WADADA roger"
These guys should have been left to rot in jail, I now know why Museveni is opposed to bail

WADADA, it seems the 34 years and counting, you have not known who Mr. M7 is. Don't be fooled. Mr. M7 has never been opposed to bail.

In other words, like himself, organized criminals including violent ones, are functional to sustain his stranglehold on on Ugandans (power).

I said this before Mr. M7 means the opposite of whatever he says. E.g. his 1986 "fundamental change" rhetoric meant "no change".

"The problem of Africa is leaders refusing to leave office", meant he too was going nowhere.

"Kisanjja Hakuna mchezo (corruption)" means I am kidding, it will be business as usual.

Didn't Mr. M7 say that he liberated Ugandan, but not surprisingly, on 26th Jan 2017, said he is only fighting for himself and family etc., etc.
Report to administrator
0 #7 rubangakene 2019-09-17 21:35
Relatives of the victims of human trafficking should get together and raise fund to bring a civil suit in concert with the criminal case. (GoFundMe).

This should make them these "mafuta mingi" broke to the bone!
Report to administrator