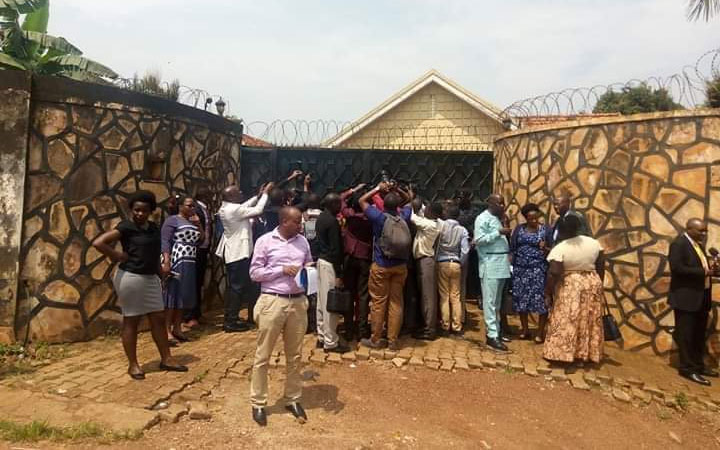 MPs at one of the safe houses in Kyengera

Members of parliament on the Human Rights Committee have been blocked from accessing suspected 'safe houses' in Nkokonjeru, Kyengera and Nalukolongo.

Led by the committee chairperson Janefher Egunyu Nantume, the MPs on Tuesday drove to the facilities in the company of journalists only to be denied access at the facilities. Dressed in a Uganda People's Defense Forces (UPDF) uniform, an officer who identified himself as Vincent Kalibala, the in-charge of the Kyengera facility spoke to the MPs through a small hole of the gate.

Kalibala told Nantume that they were not informed of their visit and that their access can only be granted by the director general International Security Organization (ISO), Col Kaka Bagyenda.

He advised the committee to go to the ISO offices in Nakasero and seek permission from Bagyenda. Despite insistence from Nantume that the committee has powers from parliament to carry out the visit, Kalibala said he could not give any further statement on the matter. After the discussion yielded no fruit, Nantume briefed journalists describing the situation as sad and unfortunate.

"It's unfortunate that we cannot be allowed to access this facility in an effort to exercise our mandate. We are going to discuss as a committee on the way forward," said Nantume.

Kyadondo East MP Robert Kyagulanyi said that the development further exposes a blatant abuse of human rights by ISO. Kawempe North MP Latif Ssebbagala said that the committee cannot stand and see Ugandans being harassed and keep quiet. He said that they will leave no stone unturned in regard to the alleged tortures in safe houses.

At another facility in Nalukolongo in Musoke Zone, the MPs found UPDF officers and others clad in Local Defense Unit (LDU) uniform at the gate. They also declined to grant the MPs access directing them to seek permission from an officer only identified as Maj Sulait at Nateete police station.

Revellers we spoke to at Nalukolongo, said that the facility is always under tight security. Two residents who preferred anonymity claimed that a timber seller identified as Yiga was recently tortured to death at the facility, and the UPDF officers disguised his death by shooting in the air saying that he wanted to flee.

At Kyengera, residents who gathered on arrival of the committee said that the facility is no go area for them since they are barred from standing near the premises.

"We stay around here but the army officers never allow us to get close to the gate. We only see soldiers entering and coming out and sometimes we hear cries of help from inside," said one of the residents.

Last month, speaker of parliament Rebecca Kadaga directed the Human Rights Committee of parliament to investigate claims about the presence of safe houses in Lwamayuba and Kyengera where several Ugandans are reportedly being tortured.

The directive followed concerns raised by MP Ssebaggala and his Arua Municipality counterpart, Kassiano Ezati Wadri who narrated the horrendous torture of Ugandans in ungazetted places.

Ssebaggala cited several complaints about missing persons from different constituencies across the country explaining that he was approached by some people who managed to escape after allegedly being kidnapped by the Internal Security Organisation (ISO) operatives.

Ssebaggala claimed that after picking the suspects, ISO takes them to Katabi in Entebbe from where they are loaded onto canoes and boats and taken to Lwamayuba on Kalangala island. Equally, Wadri reported a case of kidnap and rights violation claiming that Jamila Asha Atim, a records clerk at Arua regional referral hospital was kidnapped by men in a white vehicle on April 17, 2019, as she was heading home. He explained that Atim’s relative approached police, which wasn’t aware of the incident.

“As the relatives went further to try and find out from other security agencies, it was later discovered that Atim is being detained in Kyengera safe house along Kampala-Masaka road. In this same safe house people have undergone horrendous torture, they are given one meal in four days,” said Kassiano.

The Committee is scheduled to meet with the ISO director Bagyenda on Wednesday over the matter.

Ugandans/British fight themselves while Museveni/Brussels enjoy the show, get their money!

Why will Ugandans vote in presidential/ parliamentary elections again when it's Museveni who has already won & doesn't need mps?

UK elected members have understood & won't go for early election, yet non sees it's UNITY around B. Johnson that UK needs so so badly!

Why is it only Museveni/Brussels that know how to rule Uganda/UK?

How is Ugandans/British fighing one another going to help stand ground face to gods Museveni/Brussels?

Are Brussels/Museveni divided lame ducks who will let go UK millions/Uganda tax money they believe belong to them by right of birth?

But UNITED Ugandans/British can win with MP Robert Kyagulanyi/B. Johnson, then make their stand as 'REAL NATIONS'!
Report to administrator
+1 #2 juwait kali 2019-09-10 19:32
My job is to salute individuals who have seen the light and are exposing Museveni and his colonies lies and their murderers wayz.

May God purnish all killers in the end. Nga bwekyawandikibwa.
Report to administrator
+2 #3 Ugthinker 2019-09-10 22:59
This is what Dr Kizza Besigye always says but Ugandans never listen. Power is with the hijackers, not Parliament, not Court!

Even these MPs are just hypocrites who, deep down their hearts know that they command nothing yet, roam around pretending to be the overseers!

Ugandans MUST wakeup to the fact that we are all captives of Museveni as a starting point, then strategise on how we can free ourselves, ministers, MPs, judges, everyone included!
Report to administrator
0 #4 WADADA roger 2019-09-11 10:29
Please dont spoil my morning by calling such a facility a safe house, clearly this can only be a safe house if you have not been kept in it for years without access to legal representation, medical care as well as family.

It is a real definition of UNSAFE house., it is dungeon, a torture chamber and a house of suffering. I cant wait for the day some of these guys will be kept in those very houses for "safety".
Report to administrator
0 #5 WADADA roger 2019-09-11 10:32
I hear Kalibala told Nantume that they were not informed of their visit and that their access can only be granted by the director general International Security Organization (ISO), Col Kaka Bagyenda.

I liked the move by the MPs, if you inform these guys in advance, they can transfer the victims to another location and may be clean up the place. But honestly speaking, why should any one on earth secure houses specifically to violate human rights.
Report to administrator
+1 #6 Odongkara 2019-09-11 12:51
This incident clearly proves that the Uganda parliament is a rubber stamp to legitimize and stamp dictatorship.

The Unsafe houses are illegal in Uganda and I don't understand why the MPs should go to supervise an illegality?

Instead of wasting time doing this the only legitimate thing to do is table a motion for the impeachment of the president and the minister of Security for breaking the constitution.
Report to administrator
0 #7 Ugthinker 2019-09-11 14:29
Quoting Odongkara:

The Unsafe houses are illegal in Uganda and I don't understand why the MPs should go to supervise an illegality?

Bu hen how would they be able to help their constituents who ran to them for help!

They needed to cross reference the allegations. They needed first hand information as basis for the next course of action.
Report to administrator
0 #8 Lakwena 2019-09-11 16:30
In other words, what is the difference between Mr. M7's rouge terror and murder regime and Amin's era of terror and murder by the notorious State Research Bureau operatives? No difference.

This NRM regime is as guilty as Amin's regime (charged). It is guilty for the 34-year human rights violations, in form of: torture e.g. the Kandoya, other dehumanizing treatment, confinement and detention of suspects in ungazetted premises and extrajudicial killing of suspects e.g. the Mukura Railway Station inferno, and in those premises (Safe Houses) they hae denied the MP to access.
Report to administrator