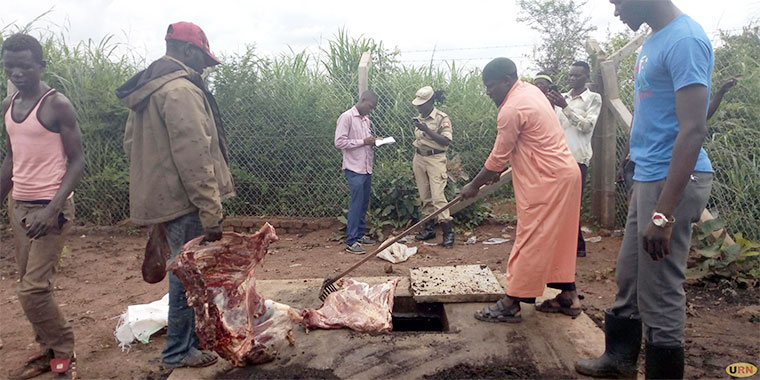 The meat being dumped in a soak pit

Angry Muslims have destroyed more than 70 kilograms of meat at Gulu municipal abattoir. The destroyed meat was from animals slaughtered by a non-Muslims. The meat was dumped into the soak pit at the abattoir on the orders of Sheik Musa Kelil, the Khadi of Acholi Muslim district.

According to Sheikh Kelil, the meat was dumped for the safety of consumers since the cow was slaughtered in contravention of the standards set by Uganda Halal Bureau. Kelil argues that the non–Muslims who slaughtered the cow, mocked the Islamic faith since he committed the act on Eid el-Aduha, an Islamic festival marking the end of Islamic pilgrimage and commemorates the decision of Abraham to sacrifice his son, Ismail.

Sheik Ismael Ali Omona, the Imam of Jamia Mosque in Gulu town revealed that there are only two legally recognized slaughtering points in Gulu, which include the main abattoir in Layibi Division and another one at Unyama Trading centre with four certified butchers.

According to Omona, they have heard rumours that two abattoirs in Bungatira sub-county and Lacor trading center are operating illegally. Christine Ajok, the acting Gulu Municipal veterinary officer who witnessed the dumping of the meat condemned the illegal slaughtering of animals and vowed to hunt and arrest the culprit.

In March 2011, The Uganda National Bureau of Standards (UNBS) and the Uganda Halal Bureau signed a partnership to ensure that all locally-produced foods, beverages and institutions get certified under hygienic and religiously acceptable standards.

Christians should learn that the Holy Quran forbids any living creature be it a dog to eat any mean which is slaughtered by a person who doesnt worship Allah.Allah is the giver of life,so he is the only one who can take it away.

There is nothing holy about the Quran if this is the behaviour you guys exhibit.

I am beginning to think that Quran and Islam are evil. Muslims kill or discriminate against non-Muslims with reckless abandon; this is not the practice of something holy!
Report to administrator
+1 #22 Wooden K. 2019-08-16 11:42
Hello Sabiti , how is our day ?

Yes , Ibrahim Kisuule is not alone in his thinking . suicibe-bombers justify their deadly actions by quoting the "holy Quoran" just like he has done .

They say "killing any person who does not worship Allah " is from the Quran . Because the killer on non-muslims is doing it on behalf of Allay , the one who gives and takes away, the killer goes straight to Janah and is awarded 70 virgins and gardens full of ffene and all fruits you find in Nakasero Market.

I can`t see how Shiek Musa Kelil could discourage a suicide-bomber from killing all those who "illegally staughtered animals on a wrong day.
Report to administrator
-1 #23 David Trezeguet 2019-08-16 14:29
Wooden K,
Muslim apologists often say mbu the terrorists misunderstand the qur'an and are therefore not muslims
Surah At-Tawba 9:29
Report to administrator
+1 #24 Wooden K. 2019-08-16 14:51
Hello Trezeguet !
there is evidence right here that Musa Kelil and Ibrahim Kisuule would support beheading of non-islamic muslim who does not follow their own interpretation of the "Holy Quran".

Its for that reason , among others , that the moderate muslims in Uganda usually totally keep quiet everytime some mad mullah shows up.
Report to administrator
+1 #25 Emmy 2019-08-17 15:47
Were there no poor non-muslims who could benefit from the God send Manna of free meat instead of burying it? Very hurtless Sheikh
Report to administrator
123