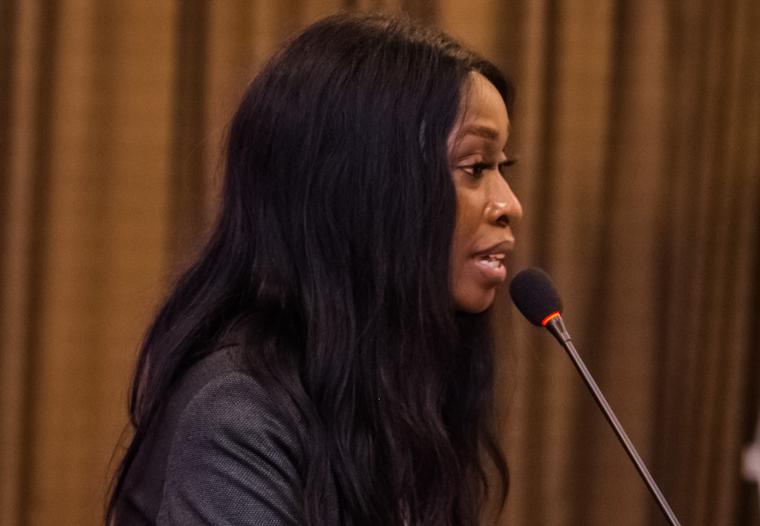 City socialite Judith Heard has asked Ugandan security agencies to stop harassing women who have been victims of online gender-based violence, urging them to instead pursue their tormentors.

Heard, whose nude pictures made rounds on social media last year, made the remarks at a workshop organised by The Collaboration on International ICT Policy for East and Southern Africa (CIPESA) and social media giant Facebook at Serena hotel on August 7 under the theme; “women’s online safety.”

In an emotive presentation, shared with a gathering that mainly constituted of personalities from civil society and the media, Heard said that it’s about time government stopped prosecuting the victims but hunt for the real online bullies.

“I was already traumatized,” Heard said, “but then the police called me saying I had violated the Anti Pornography Act.”

Government according to Heard hasn’t tried to earnestly follow-up cases of online bullies.

“Once my pictures were out they were saying you [Heard] are going to jail for seven years. Many girls have committed suicide because their pictures have leaked. Why can’t government act,” Heard said.

In August of last year, after her nudes went viral, police summoned Heard insisting that it had opened up seven counts against her connected to the production of pornographic material and being a public nuisance.

The particular accusation by police was that Heard had produced pornographic pictures and videos of herself which allegedly she posted on social media conflicting the Anti-Pornography Act 2004.

Though police were on her case, Heard, divulged that what traumatized or still traumatizes her was the thought of what her children will think of her the day they discover that her nudes were ever shared on social media.

“What will happen when my children get access to a computer and they see my nudes? What goes through the mind of my daughter when she reads in newspapers that Judith Heard’s nudes are out?"

The workshop's main objective was to engage and build capacity in understanding gender-based cyber violence and the tools to challenge, combat, prevent and counter the vice.

She added: “No newspaper has ever written about Judith Heard donating to an orphanage. It’s ever Judith Heard with nudes.”

Before Heard could take to the floor, Juliet Nanfuka a programme officer with CIPESA in her powerpoint presentation showed how the online space in Uganda is skewed in favor of men.

50 percent of women, Nanfuka said, are less likely than men to be online and the few of the women who are online are normally harassed.

“Very few women are on online because now we even have social media tax,” Nanfuka said, “But even those who are online they are offended. Men sending them private parts ….”

Once her nudes went viral, Heard said that what shocked her was the acidic attacks she got from her fellow women.

“I know most Ugandan girls have nudes but the attacks they directed towards me,” she said, “Shall we cry endlessly. We must stand up for fellow women. Every time I stand and people are looking at me, I’m thinking are they seeing me naked.  I’m ever thinking what are these people thinking me.”

A woman police and a woman DPP like Kadaga should be selected where such a lady as Judith is concerned.
Report to administrator
0 #12 Kabayekka 2019-08-12 11:17
Surely it beggers belief that on the African continent, one sees only the police men doing the harrassment as the black sisters not at all interested in becoming police women, are busy brushing their hair in expensive health soloons around the African towns!
Report to administrator
0 #13 Yumbe 2019-08-12 20:39
Heard should stop being childish and foolish.

She claims to have a husband but having sex with every Tom, Dick and Harry. Thus, the exposure of her nude picture to the media shows that she plays sex with low quality category of people and that can only be done by a prostitute.