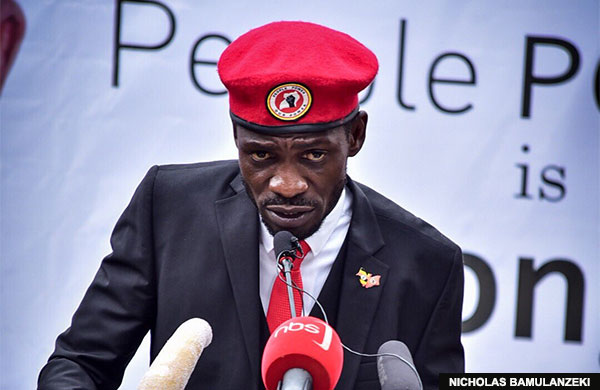 Kyadondo East member of parliament Robert Kyagulanyi aka Bobi Wine has officially announced his presidential bid in the 2021 elections.

Since turning to politics about two years ago, the musician-cum legislator has often remained coy about his presidential ambitions, usually giving half answers on the matter. But today, at his home in Magere, Gayaza, Kyagulanyi said he’s ready to take on long time President Yoweri Museveni.

Museveni has been in power since bombing his way to power in 1986. His closest challenger has always been Rtd Col Kizza Besigye in elections that have often been marred by rigging and several electoral violations as confirmed by courts in 2016, 2011 and 2015. Besigye and Kyagulanyi have been in talks over the 2021 elections.

“On behalf of the people of Uganda, I am challenging you [Museveni] to a free and fair election in 2021...We're ready to kick Museveni and his cronies out power in 2021 and I am very serious about this.” said Kyagulanyi.

Kyagulanyi said he may not be the best educated and most knowledgeable opposition politician to take on Museveni, but he’s “a person who wishes the best for my country and the general citizenry.”

“I am ready to challenge the current leadership in 2021 and I promise I will never at any time betray the people of Uganda.” he added.

At the same press conference, Kyagulanyi also announced a team of coordinators from across all regions in the country that will provide leadership ahead of the polls. The West Nile is headed by Arua Municipality MP for Kasiano Wadri (Independent), Acholi is headed by Amuru Woman MP Lucy Akello (FDC) while Karamoja region is headed by Jie county MP Moses Bildard Adome (NRM).

The Youth Wing is led by Mityana Municipality MP Francis Zaake while Roy Semboga heads the Institutions sector. The Women Wing is led by Flavia Kalule while PWDs is led by Pastor Robert Mpala Isabirye. Arts & Entertainment is headed by Kyagulanyi’s closest comrade Nubian Lee while the Informal Sector is to be led by Kyagulanyi's brother Fred Nyanzi Ssentamu.

However some of the announced coordinators have distanced themselves from the People Power Movement. Jie County MP Adome, who, was announced as the team leader of coordinators for Karamjoa region, reached out to The Observer to distance himself from the role. Adome who belongs to the ruling National Resistance Movement said that People Power must have assumed that whoever voted against the age limit amendment in 2017, automatically belongs to their movement.

"Looking at the list, it's surely a presumption by the people power group that whoever voted against the age limit is for them. This is not true to some of us." said Adome.

“Whereas it's also my right to belong to any political party, it is also my right to be protected from circumstances that may be of jeopardy to my roles as a member of parliament from NRM. I will request to know what exactly the People Power stands for, what they would wish me to do and how they expect me to do and how possibly it may be of help to the people I lead. Short of the above, I won't be fooled to accept what I don't see light in.” he wrote on his Facebook page.

Adome told The Observer that he was only contacted yesterday night at around 11pm by Joel Ssenyonyi, the People Power Movement spokesperson and asked if he could lead a team of coordinators in Karamoja.

“I asked him [Ssenyonyi] to call me back in the morning and to explain to me what exactly I was expected to do. He never called back, and the next thing I knew was my name being announced."

Asked if he would take up the role anyway, he said only if everything has been clearly. Ssenyonyi told The Observer on phone that all the coordinators were engaged in meetings before with Kyagulanyi and MP Muwanga Kivumbi where their roles were explained. He explained that Adome was contacted last night just like the rest of the coordinators as a final confirmation.

I know M7's ball are bigger and are hanging way higher than you IQ. However, I believe that you have kept record of his deceit.

Furthermore, what has changed since M7 came to power (1986) which make you believe that Wine is the sliver bullet? Like I stated above, there is nothing new about Wine.

Once we engage M7 in M7's elections, that is exactly where he wants us. Katikiro Mayiga will be the first to passionately congratulate M7 for rigging the elections!

Then Bishop C Lwanga will be the guest of honor. Then Nabagereka will keep hanging with Janet M7 as if they are twins, and being a guest of honor on each and every crook's wedding, whom she clearly knows that they are looting our country naked!

Fellow Ugandans, enough is enough, M7 must go. We should not engage in any activity that continues condone M7's deceit, corruption and violence. Period.
Report to administrator
-1 #32 Lysol 2019-07-26 23:07
Answer to karemere:
in a constitutional democracy, it not about the tribe/region or where someone comes from to be a leader of the country.

There is no entitlement or an affirmative action how to choose a leader. Leaders are chosen based on merit and competent.

Like it or not Besigye was robbed many times, because of not being photogenic enough, aside from his emotional outburst sometimes, ( The New York Times article " Is this the face of the future Uganda president"?).

Some would even say that; the rivalry was over his trophy wife, whom they both shared. I have always admired his perseverance and courage though.

One Muntu is not charismatic enough to be a leader. because of his low energy and lackluster performances.
Good luck to Mr Wine if he can stand the heat and whatever they will throw at him.
Report to administrator
-1 #33 Wooden K. 2019-07-27 12:26
Good afternoon my dear friend Remase !

First , let me say two things :
1-our IQs - your and mine are here on display. Those who read what we say and how we reason shall and can judge us.

You typically accused her of not caring . I wasn`t suprised becauce that how low you reason.

Me ... I have told you many times that I don`t care what you think of me; my opinions on Museveni have been consistent and well stated here for the 3 years I have commented on regular basis. No crap or distortion can change my position.

YOU ? : Museveni is violent ; no one can defeat him , Boii Wine is nothing; ; so and so is mole , Kabaka and Mayiga are this and that ; Nagereka and Janet are twins ; Bishop Lwanga is guest of honour , this one and that one do not care .

Thats is your Chorus

And what is your plan ?

"enough is enough M7 must go "

They are below any respect it descent polemics or debate Many,many times I blasted them off and showed that they are idiots and saboteurs.

People will have final say in the coming elections and can easily cast their votes.For MUSEVENI Yess SSEBO,because Ssebo doesnot sleep and plumdrt resources but building Uganda and fighting sabotage and corruption and crime He is the best we have and we do not want to change the winning horse.For adventurers,let's the make their choices and talk blablabal!!!
Report to administrator
1234