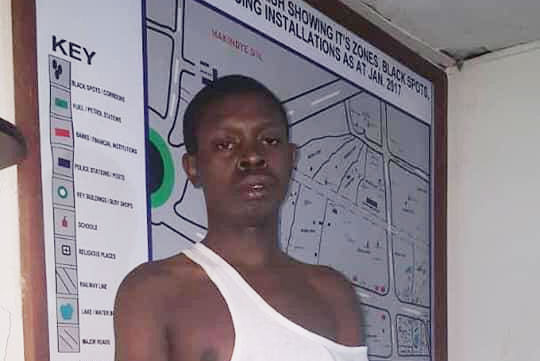 Police have confirmed the arrest of one of the suspects who appeared in the CCTV footage strangling a boda boda rider to death in Rubaga Division in Kampala, about two weeks ago.

The Kampala Metropolitan Police spokesperson Patrick Onyango identifies the suspect as John Bosco Mugisha alias Mukiga. In a statement issued this afternoon, Onyango explains that Mukiga was picked up from his hideout in Nsiike I, Ndeeba, Rubaga Division in Kampala last night following a tip off.

According to police, Mukiga confessed that he and his friend, Young Mulo (not the music artist) were the ones who strangled Derrick Mulindwa at Kakyeka in Mengo Rubaga, in Kampala around 4am on June 30, 2019.

The duo was caught on CCTV footage, which went viral on social media in both Uganda and India, strangling Mulindwa to death before making off with his motorbike. Mukiga according to the police statement, said that Mulo was lynched by a mob three days later for theft of another motorcycle on July 3.

“Mugisha admits that they had robbed the motorcycle from Mityana on July 2, 2019 and they where traced up to Makindye in Kampala, where the mob killed his colleague. Mugisha alleges that he had escaped that day and went to Kabale,” reads the statement.

Adding that, “Mugisha has been arrested several times and he has been to Luzira Prisons many times on robbery cases.”

Mukiga is currently locked up at Katwe police station pending transfer to Old Kampala police station, which covers Mengo where Mulindwa was killed. It is unclear whether the three look-alike suspects who had been arrested earlier in connection to Mulindwa’s murder will be released from the Special Investigations Division (SID) following Mukiga's arrest and alleged confession.

Police spokesperson, Fred Enanga, had earlier indicated that forensic experts were still struggling to obtain a clear picture of the actual killers since the three suspects look alike. He said police would procure software that would help them to get clear pictures from the video grab.

0 #1 Mumonkey 2019-07-17 19:36
Repeat offenders, especially those who commit aggravated and violent crimes should be locked away for life.

Mister Mugisha is obviously a graduate in crime and should have stayed locked up. They killed an innocent man who was just trying to earn an honest living.
Report to administrator
+4 #2 naboma 2019-07-18 07:44
Amin was right. People like Mugisha need to be shot during day light at city square to deter other silly criminals from such inhuman acts.

This crime in Uganda is getting too much. we cannot afford to loose many more innocent people in the name of observing the law. Once proved firing squad and in a year crime will reduce.
Report to administrator
+1 #3 Lakwena 2019-07-18 08:24
To commit the kind crime captured on the CCTV, the Mugisha of this country must be the MASTERS of VIOLENCE.

He must be interrogated to find out how many Ugandans he murdered in that fashion, to take away their properties/borders.

But the mother of all question is: that Mugisha has been arrested several times, been to Luzira Prisons many times on robbery cases.” raise a serious question about the justice system.

Robbery is a capital offense, and the minimum sentence is 10 years, to the death penalty. How in the world the Mugisha of this country walks out of prison so soon to do the same thing, raises goosebumps.

In other words, if it is "several times" unless he had a Godfather in the Prison and Justice System, Mugisha would still be in prison and Derrick Mulindwa would still be alive.
Report to administrator
+2 #4 Wazza 2019-07-18 08:34
Usually I never believe these police stories especially when they say the suspect has confessed.

A police that demonstrated incompetence over time can not track such a crime, no matter how simple it is.

These guys can not investigate any crime. Whenever u see that Enanga guy speaking, 99% of what he says are pure lies. Just wait and see, the story will disappear and next u hear is another police statement. Absolute rubbish!
Report to administrator
0 #5 kabayekka 2019-07-18 14:08
It looks as though prison in Uganda does not help the criminals to reform.

And the liberated state of Uganda reckons that the only way to reform a criminal is to cut his head off and bury his torso in unmarked grave.

That exactly is what the liberators of Uganda did to those fighters that they found out that had committed treason in Luweero during that unfortunate civil war!
Report to administrator
+1 #6 Alex 2019-07-19 12:36
Just lockup that murder suspect for life so that we can save other ugangans
Report to administrator