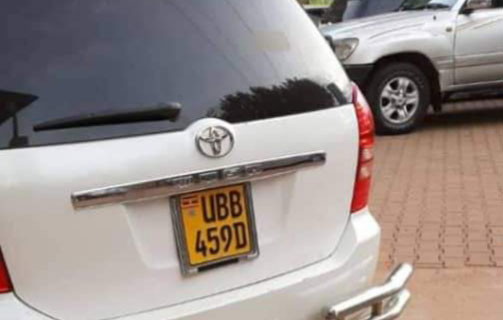 The vehicle that witnesses say was used to drive away Kabuleta

Joseph Kabuleta, a journalist-turned preacher who of late has authored several stinging criticisms against the government and the first family, has been arrested mafia-style from Lugogo as he prepared for his weekly Watchman Fellowship held at UMA Upper Gardens.

Witnesses say Kabuleta was enjoying tea with friends at Drew & Jacs Patisserie in Lugogo when plain clothed security agents picked him at around 5pm and bundled him into a waiting Toyota Wish, reg no. UBB 459D.

Police has in a statement confirmed having Kabuleta in their custody. According to police, Kabuleta severally referred to President Yoweri Museveni as a gambler, thief and liar in his Facebook postings.

In recent months, Kabuleta has written biting weekly dossiers on social media criticising government’s failure to tackle sectarianism, corruption and nepotism, among others. He has also particularly attacked the privileged first family for their alleged detachment from the rest of suffering Ugandans.

The situation at UMA Upper Gardens is tense as his followers remain confused about his whereabouts. There has been an increase in state kidnaps of regime critics - with the state first denying before the suspects get charged with offensive communication.

The duo is still battling offensive communication and computer misuse charges after allegedly attacking the person of the president through their social media postings. Nyanzi was arrested in November 2018 and has been on remand since while Bajjo, who, was kidnapped in similar style to that of Kabuleta, was only granted bail this week following his arrest last month.

Kabuleta's arrest comes just a few days after he published on Facebook on July 8 a stinging long article titled; MAFIA EMPIRE AND THE TRANSITION. In the article he stated how the "Muhoozi Project" is back on. The "Muhoozi Project" was first mentioned by now regime critic Gen David Sejusa as a deliberate effort by President Yoweri Museveni to propel first son to the presidency first by recruiting him into the army and now as presidential advisor. In his post, Kabuleeta said, "The big question for Ugandans is: How and when are they planning to make this transition? The First Son is already being sent on foreign missions on behalf of his father and is meeting ambassadors and dignitaries, and tweeting about it."

"Maybe the Godfather is planning to go into semi-retirement after rigging the 2021 elections and take on an advisory role as his son runs the Family Business called Uganda Limited. Or maybe, just maybe, the transition happens within NRM and the country adopts a Parliamentary System in which the party with the most elected legislators takes the presidency."

History is notorious for repeating itself, isn't it?
Report to administrator
+22 #2 Olum S. 2019-07-13 00:41
"There has been an increase in state kidnaps of regime critics - with the state first denying before the suspects get charged with offensive communication."

This is the way things have been going for a while now. This is the way of a failed, illegal regime that has become sensitive to anyone that dares to state the obvious about them.

Meanwhile, arresting, jailing, torturing, and extrajudicial killing of critics can only intensify the levels of contempt and hatred that wanainchi harbour for this Rwakitura mob.

They offer absolutely nothing positive to the country but pain, misery, suffering, and increased levels of bloodshed in the near future so long as they and their hangers-on forcibly hold on to power.
Report to administrator
+8 #3 Kirya 2019-07-13 17:28
M7 is a qualified thug power hungry destruction
dictator terrorizing Ugandan with a smile on his face .
He believes that Uganda is his personal.property
Report to administrator
+4 #4 Karemire 2019-07-14 12:04
Quoting Kirya:

M7 is a qualified thug power hungry destruction
dictator terrorizing Ugandan with a smile on his face .
He believes that Uganda is his personal.property

Actually, if they dare face the court for these charges, it will be a "field day" for some of us. I say so because both charges (thief & liar) are well documented, especially the latter.

Everything the president says or does is documented. Witnesses supporting the journalist will be plenty too.
Report to administrator
+3 #5 Lakwena 2019-07-15 08:11
Is Joseph Kabuleta the first person to say publicly that Mr. M7 is a thief and liar? Nada!

E.g. Obote (RIP) told whoever cared to listen that Mr. M7 is not only a consummate liar but worse: a killer too. Didn't Mr. M7 lie that if elected in the 2001 General Election, it would be his last term?

In the Observer 22nd May 2017, in an interview with Benon Oluka; Muzee Boniface Byanyima (RIP) sarcastically and repeatedly said that:

In other words, who knew Mr. M7 better than Muzee Byanyima and family members? Probably non.

I therefore wonder why Mr. M7 did not send his henchmen to pounce on Muzee Byanyima and drag him to a Safe House for a torture session; over disturbing his peace.
Report to administrator
+3 #6 Lakwena 2019-07-15 08:34
From 1981 up to 2005 (24-year civil war), Mr. M7 and NRM gangsters using guns and unforgivable verbal insults; disturbed the peace of the people of Uganda, from Luweero to Northern Uganda.

But here he is, on rampage arresting Ugandans who apparently are fed up, sick and tired of his dishonesty (lies) for disturbing his peace with insults; which he is also very good at.

Mr. M7 wants to be at peace with his nepotism, tribalism and and cronyism.

"There has been an increase in state kidnaps of regime critics - with the state first denying before the suspects get charged with offensive communication.".....

I fully endorse your comment above and I add: (a) the Judiciary itself might have been compromised. I say so because they should not be accepting "kidnap" as an "arrest".

(b) As far as I know, in law, only the police has power of arrest of civilians. (c) An exception in that law is "citizens' arrest" in which the suspect the citizens hand the suspect over to the police for further processing.

The CMI does not have that exception in law. (d) What has become of the arrest procedures such as warrants of arrest? (e)

It is my gut feeling that the Law School itself is compromised, thus are their outputs of lawyers whom they have trained. In which case sending the Judges back to that School would further re-enforce that effect. [It is my hope that I am wrong to feel that way].
Report to administrator
0 #8 Vincent Kizza 2019-07-15 18:44
God, have mercy on our country!
Report to administrator
0 #9 Lakwena 2019-07-16 12:06
Quoting Karemire:

...
(b) As far as I know, in law, only the police has power of arrest of civilians. (c) An exception in that law is "citizens' arrest" in which the suspect the citizens hand the suspect over to the police for further processing. ...

Karemire, there are two or more parallel sets of laws being used to run the affairs of this country:

1. Those according to the Acts of Parliament and

2. Those according to the Acts of Mr. M7 in State House.

In other words, according the Acts of the Parliament of the Republic of Uganda, it is the Ugandan Police and/or thru the Courts of Law, (Warrants of Arrest) to apprehend suspects.

But according to the Acts of Mr. M7, it is arbitrary orders from above and 'incommunicado arrests and detention" of suspects (critics), in un-gazzeted premises (safe houses).
Report to administrator
0 #10 Lakwena 2019-07-16 13:42
E.g., Mr, M7's Act of arbitrarily, tribalistic/sectarian recruitment and appointing UPDF officers into the Uganda Police.

In other words, these are the illegal UPDF officers (kawukumi) in the Police, Mr. M7 illegally issues order from above, to illegally, criminally and brutally arrest Ugandans who no longer accept his illegitimacy and illegitimate actions in/thru our State House.
Report to administrator