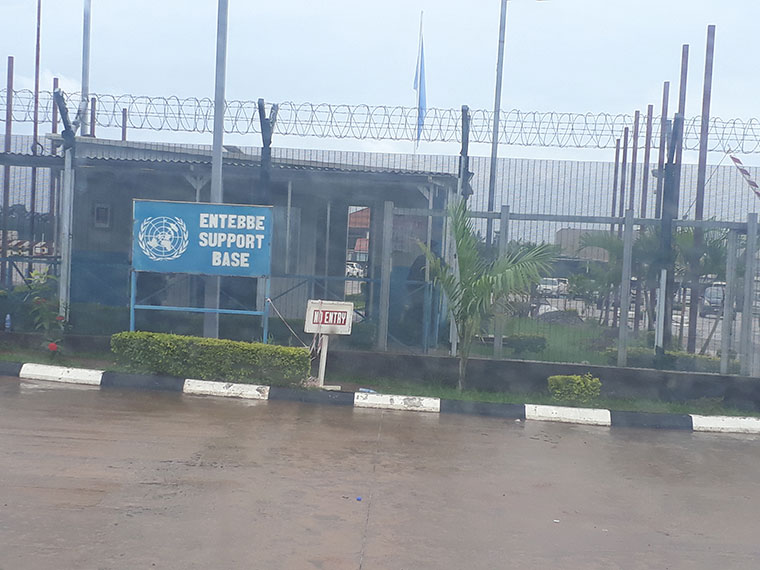 UN support base in Entebbe

Eight Bank of Uganda top officials are under investigation by the State House Anti-corruption unit for alleged collusion in a procurement and supply chain process anomaly. Government spokesperson Ofwono Opondo says in April this year, about 15 Bank of Uganda officials travelled to Paris, France to procure 'printable items' for the government.

Government then on April 27, chartered a plane from Paris to Entebbe, but among Bank of Uganda’s official 20 pallets, according to Opondo, there were other extra 5 pallets of 13 private individuals and organisations including the United Nations (UN) irregularly loaded unto the cargo plane. No other items were meant to be on the plane except Bank of Uganda's.

Ofwono says it is surprising that organisations such as the UN would collude with government institutions and individuals to bring in items into the country disguised as government items. Among the smuggled items, Ofwono says included blood reagents and solar systems.

Ofwono says the heads of currency centre Mbale and Kabale were responsible for verifying the pallets but they only reported about the extra pallets to the Bank of Uganda superiors 4 days later on May 2. On May 3, Bank of Uganda governor Emmanuel Tumusiime-Mutebile wrote to the State House Anti-corruption unit to investigate the involved officials.

"During the verification process, BOU staff reported an anomaly in the inventory of the expected consignment,” Mutebile stated.

According to head of State House Anti-corruption unit, Lt Col Edith Nakalema, also under investigation are Civil Aviation Authority (CAA), airport security personnel and customs officials who are being questioned about the matter.

“The investigation is being carried out following the invitation by the governor Bank of Uganda,” Nakalema said.

In the past two years, the central bank has been cast into the public storm with several officials there accused of fraud. An investigation by a parliamentary committee on Commissions Statutory Authorities and State Enterprises (Cosase) indicated there were irregularities in the closure of defunct banks – with indications that some officials at the bank could have benefited financially.

Thieves again, and we hear that MPs and ministers dormant not doing what they are supposed to do and only the president has to tour the country and find out!What is the Prime minister doing and his government ??

this is only 15 % of the story . 85% remains hidden and unknown by the Ofwono Opondos.

This racket has been going on for more than 13 years , Some of the "connected" tycoons , and a few members of the inner-circle have been getting billions of cash from from currency printers .

Some of this "kago" that is supposed to have been found on the chartred plane by BoU is actually cash that was supposed to be shared by government and Bank Officials.

Wooden, have you heard about bricks (matafali) or fresh fish being transported in an Ambulance, with a full blast beacon lights and siren?

In other words the main beneficiary of the heist is State House, without which nothing of this nature happens.
Report to administrator
0 #16 Lakwena 2019-06-17 08:40
One of the flies on the State House wall, non other than a disgruntle, wrong tribe SFC, says that whenever such kago "alives", part of it goes to SH, and at breakneck speed the loot is spirited off to Rwakitura in less than two hours at 3:00am.

E.g. how many Rwakitura meetings take place and the all participants come out smiling ear to ear carrying fat brown envelops.

Prior to and during the 2016 NRM primaries, wherefrom did the party obtain tons of crisp brand new Bank notes to fund its nation-wide elections?

When everything is said and done , NOTHING IS GOING TO HAPPEN .

Ofowono Opondo will eat his words and fold back into his proper shell as usual .

Nakalema is a ACTOR playing her part . Enjoy while it lasts . At the end of the day , nobody is going to jail for this

As said , this is not a new . Money has always been printed , shared and pumped into the economy by the same people who COOK BOOKS . They decieve about how the economy is growing and hide the true rate of inflation and its causes.

Some of the other ACTORS that are supposed to have been arrested are actually agents and corraborators that know too many secrets .
They cannot be exposed into an arena ( courts) where they can be forced to spill beans.
Report to administrator
12