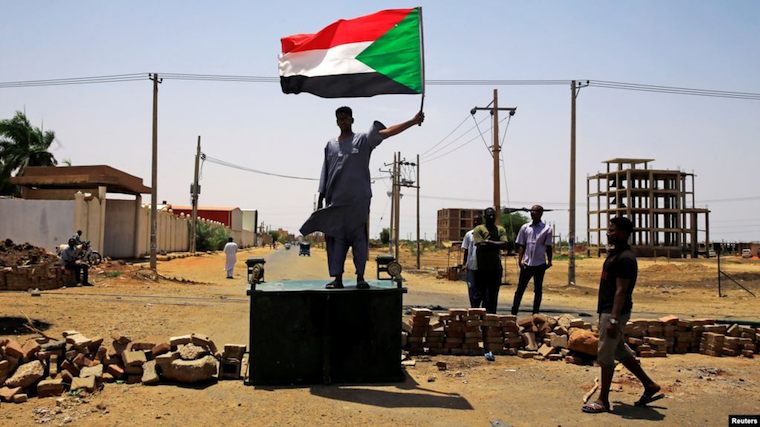 A protestor holding a Sudanese flag

Sudan's opposition leaders have agreed to end their campaign of civil disobedience and strikes and resume talks with the country's military rulers aimed at forming a transitional council.

"The Freedom and Change alliance agreed to end the civil disobedience (campaign) from today," said Dirir, who has been mediating since a visit by Ethiopian Prime Minister Abiy Ahmed last week.

"Both sides have also agreed to resume talks soon" on a handover of power to a civilian administration, he said.

The protest leaders said the call for talks is insincere following this week's deadly crackdown on demonstrators in Khartoum, which witnesses blamed on the militia known as the Rapid Support Forces.

Doctors allied with the opposition said the death toll from the crackdown had risen to 118. The Sudanese Health Ministry issued a statement last week that said the number is "no more than 46."

Protest groups and opposition parties have been demanding that the TMC, which took power after the army overthrew longtime president Omar al-Bashir on April 11, hand power to a civilian-led authority.

Talks on the proposed interim government broke down over which side would have ultimate decision-making authority.

Violence erupted in Sudan last December, when anger over rising bread prices and cash shortages evolved into sustained protests against al-Bashir before he was ousted after three decades in power.

0 #1 kabayekka 2019-06-13 02:39
Ethiopia responsible for the residence of the AU seems to learn the hard way that African military mighty alone will not develop African countries.

By trying to convince Sudan to continue talking for a better modern country between the two parties in the conflict, Ethiopia must go to Somalia as well and help democracy to thrive there as well.

It is unfortunate indeed that most of the African countries trying to sort out African problems are embroiled very much in destroying democracy in their own home countries.
Report to administrator