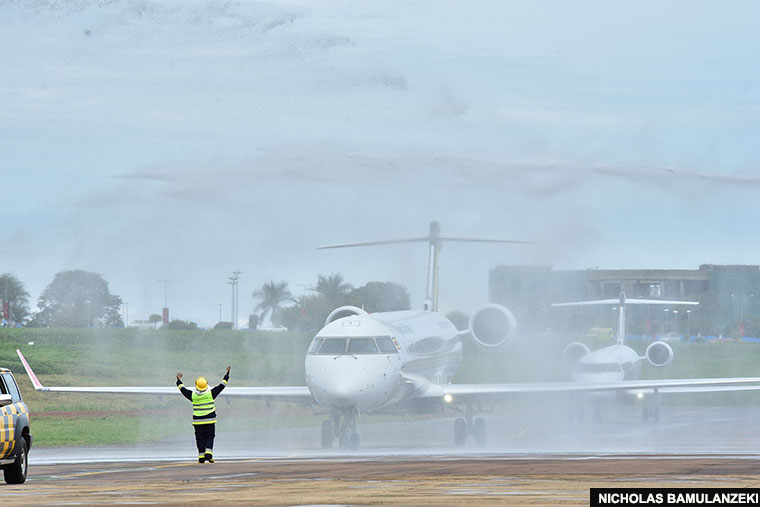 Delays in the acquisition of an air operator certificate (AOC) among other requirements, has created uncertainty over the exact time when the revived national carrier will launch its first commercial flight.

Uganda Airlines first commercial flight had been scheduled to start next month in July, but now the chief executive director Ephraim Kalyebara Bagenda says that they are behind schedule in terms of preparations.

"On securing the AOC - that is the certificate that will allow us to operate commercially, we have finished the first two difficult phases..were working on the third and the fourth one. After the fourth one we will get that AOC. We'll submit manuals, we have to ensure that we have the necessary personnel, the necessary requisites for launching an airline. Once the AOC process is complete, it is a matter of putting our house in order." said Bagenda.

The AOC is the approval granted by the country’s aviation authority to an aircraft operator to allow it to use aircraft for commercial purposes. This requires the operator to have personnel, assets and system in place to ensure the safety of its employees and the general public. The certificate lists the aircraft types and registrations to be used, for what purpose and in what area which includes specific airports or geographic region.

Bagenda says that they are currently working tirelessly to ensure that they beat the deadline. On arrival of the first two Bombardier CRJ planes in April this year, ministry of Works and Transport set a number of activities which could be handled before the airplanes embark on several routes.

The set activities were to be handled within 90 days including, acquiring human resource, supplier contract negotiation for operational services, fuel, catering and technical handling.

Other activities included branding and uniform design, setting up of commercial offices and distribution network including airline association memberships, final online system design and roll out of booking systems and payment gateways. However, URN has learnt that all these are yet to be completed.

Bagenda notes that due to the delays, they now intend to tackle only the basic requirements which will include hiring a number of service providers to handle several other items which include booking, cargo handling both at their destinations and in Uganda.

"Time is short but eventually and gradually we shall have everything in place. We’re renting offices, the airlines offices will soon be ready, we’re branding the offices - they will be in Kampala and in Entebbe. Behind the scenes we’re arranging to sell tickets through travel agents - people who specialize in sale of tickets. We shall sign agreements with travel agents to sell us." said Bagenda.

Meanwhile, the Works minister Monica Azuba Ntege says ahead of the first flight, Uganda has signed bilateral air services agreements (BASAs) with Canada, Israel and Switzerland on top of the 47 which need to be activated. She adds that negotiations with Spain, Qatar and Oman are underway.

Azuba was speaking at the inauguration ceremony of the new board of directors of the national carrier on Friday. The board of seven directors will be chaired by Godfrey Ahabwe Pereza. Ahabwe is a former MP for Rubanda East constituency and minister of State for Local Government. Transport economist, Benon Kajuna will represent ministry of Works and Transport while Godfrey Ssemugooma will represent ministry of Finance.

Other members are Catherine Asinde Poran and Rehema N. Mutazindwa, the two female nominees are from private sector while Charles Hamya and Stephen Aziku Zua, are also members of the board.

The ministry of Works permanent secretary, Waiswa Bageya challenged the new board to ensure that the airline gets means of self-sustainability than depending on unreliable government funds. Bageya told the board that their task calls for maximum efficiency because their industry is highly regulated and doesn't give room for incompetence or low outputs.

Azuba also says that the board and managers of the revived airline should closely check the value and quality of services by setting up strong client charters as they learn from the mistakes that led to the collapse of the airline.

It's more about politicking than service delivery. The rest is anybody's guess. .
Report to administrator
0 #2 kabayekka 2019-06-10 02:20
It should not be this government that is in a hurry to establish this international Uganda Airways again.

It is this very government that saw it fit to bankrupt and write off this company 20 years ago.

It certainly needs a new Uganda government to work on this company if passengers have got to pick up that necessary confidence to travel with this company.
Report to administrator
0 #3 Kelly 2019-06-10 08:48
Every time you hear a big money spinning project in Uganda is “behind schedule” then you know that the next thing is huge sums of money have been spent irregularly under the disguise of “beating deadlines”.

Who remembers CHOGM where money for “beautification of Kampala” was released 4 days to the D-Day and we were expected to grow grass, trees and flowers in 3 days!!!

And Hope Mwesigye, Amama Mbabazi’s cousin was awarded the contract.

Every time you hear a big money spinning project in Uganda is “behind schedule” then you know that the next thing is huge sums of money have been spent irregularly under the disguise of “beating deadlines”.

Who remembers CHOGM where money for “beautification of Kampala” was released 4 days to the D-Day and we were expected to grow grass, trees and flowers in 3 days!!!

And Hope Mwesigye, Amama Mbabazi’s cousin was awarded the contract.

This list says everything. A bunch of incompetent lot again!

What a pity for Uganda. As if no other competent groups to run the company.
Report to administrator