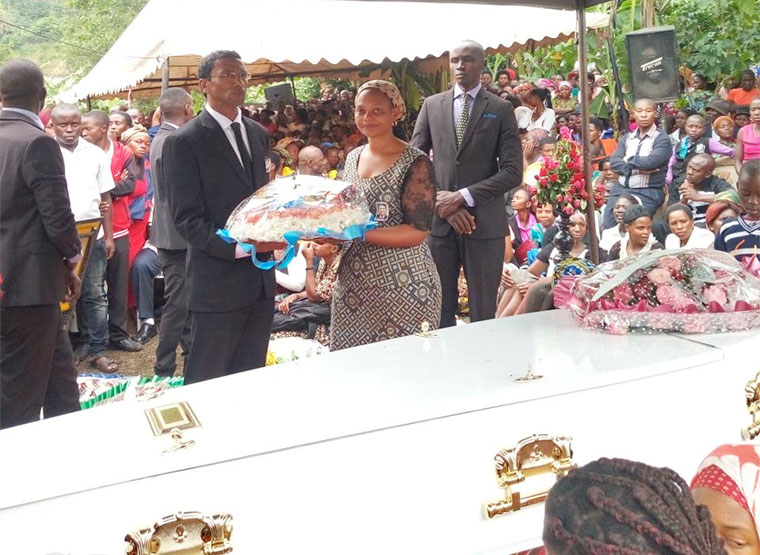 Residents of Kasese on Monday thronged the Ibanda I cell in Kasese to eulogise Roy Robert Faure.

Roy Faure, who is a brother to Danny Faure the current president of the Republic of Seychelles, succumbed to multiple organ failure at St Francis hospital in Nsambya on Friday. The deceased had grappled with hypertension and diabetes for close to fifteen years.

Roy Faure was born on March 5, 1965, to Jean Faure, a native of the Seychelles who was then working at Mubuku power station, a power generating site of Kilembe mines and Pauline Mbambu, a native of Kisamba in Bugoye sub-county of Kasese district.

A multitude of mourners gathered at his home in Ibanda to not only lay him to rest, but also eulogise him. Among them was his half-brother Barry Faure the secretary of state for Foreign Affairs in the Republic of the Seychelles.

Roy's other brother, Danny who is also the President of the Seychelles, didn't come to the funeral because of other commitments according to Barry. Barry revealed that he had been sent to represent the entire Faure family living in the Seychelles since all of them could not manage to be in Uganda owing to their father's ill health.

According to Barry, Jean Faure their father, who is now 83 years old, was recently hospitalised and is yet to be cleared by the doctor's for travel since he's still undergoing convalescence. Barry urged the family and all residents of Kasese to confide in Christ and live in the hope that his deceased brother will live to celebrate eternal life in heaven.

He told Maryline Faure and Ryan Mirage Faure - both of them younger siblings to deceased Roy, who are based in Uganda, that they now have a bigger challenge the demise of Roy has created.

James Mbahimba, the Ugandan deputy ambassador to Democratic Republic of Congo challenged the Barry to personally take charge of his father's family since the pillar of that family was no more.

Kasese LCV chairperson Geoffrey Sibendire Bigogo says the demise of Roy is a big blow to the entire community of Kasese. Bigogo says the contribution of deceased to the development of Ibanda-Kyanya town council is so immense that it is hard to find people who can transform a community like he did.

His coffee, maize and cassava milling machines employed and continue to employ so many people within Kasese district. The Kasese community also recognises his effort in the fight against the Allied Democratic Forces (ADF) rebels that wreaked havoc in the district in late 1990s.

Although he did not have any military background, Roy closely worked with the UPDF to flush out the rebel group. He repaired some of the force's armoured vehicles whenever they broke down.

He would also on a number of occasions, canvass the community with the UPDF to build confidence and also encourage the people to work with the army in fighting the rebel outfit. Bigogo says this is an effort that cannot be taken lightly in pacifying Kasese district.

George Williams Koffi, one of the cousins of the deceased says that if it were not for the efforts of Roy to convince the masses to support the UPDF in fighting the ADF, the war could have taken longer than it did. Koffi also remembers Roy as one who committed a lot of his resources to support them through school.

The deceased who was survived with a wife and nine children was buried at his home in Ibanda I cell of Ibanda-Kyanya town council. The burial was also attended by Seychelles consular to Uganda Elly Karuhanga and his deputy Aggrey Ashaba, Kasese municipality mayor Godfrey Baluku Kabyanga among other dignitaries.