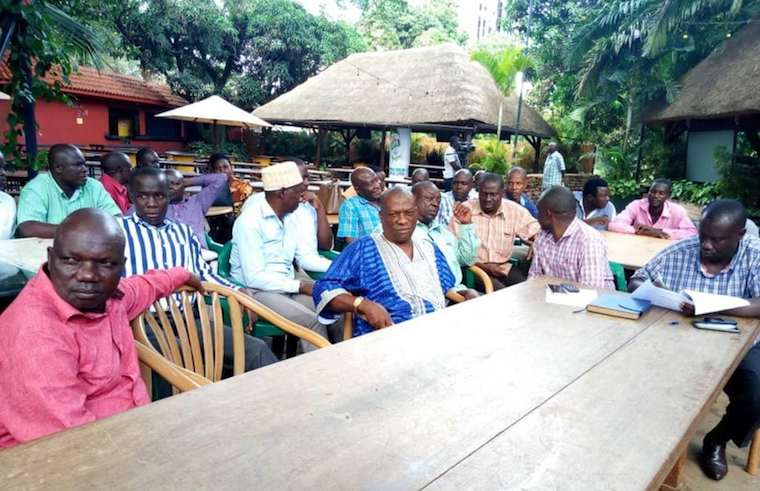 Some of the food suppliers addressing journalists

More than 200 companies contracted by Uganda Police Force to supply maize flour and beans have given the force two week’s ultimatum to pay them else they withhold supply.

Through their chairperson, Badru Kisitu, the companies claim that they haven’t received payment since 2016. According to Kisitu, police owes them more than Shs 30 billion.

Kisitu says the failure by the police management to pay them has forced banks to take over their properties since they are unable to service their loans.

He disclosed that they have contacted top police managers including the inspector general of police, police under secretary and director of logistics among others to clear their payment in vain.

The aggrieved suppliers have appealed to parliament, ministry of Finance and police management to address their concerns immediately. They also appealed to President Yoweri Museveni to bail them out since he has been helping other struggling business communities.

The complainants refused to provide a list of their companies, saying they could lose their customers and business. However, our reporter was able to see an invoice from the National Crime Preventers Forum Catering Project, which claims to have supplied 100,000 kilograms of flour to various police stations including Jinja Road Police.

Police spokesperson, Fred Enanga couldn’t be reached for comment about the complaints.

The police these days has made its name as one of the institution against a change of leadership in this country.

Well then these contractors who are now broke and in the wrong business should refuse to pay tax to the treasury for their flourishing business.

Why continue to serve a customer who is not paying you now 3 years. Is this why the poor maize grower is crying foul for consumers of maize buying maize flour very cheaply in the agricultural markets?
Report to administrator
+2 #2 rubangakene 2019-05-01 21:52
Talk of biting the hands that feeds you; the suppliers should have realised this before. All along they have been "colluding with the enemy" by keeping this police forces' stomach full while the same force bludgeon us wananchis like animals.

The suppliers can actually change the police behaviour by starving them of the gas producing maragwee and the energy inducing ugaali! Let them drink marua!
Report to administrator
-2 #3 Wainanchi 2019-05-02 07:40
Anyone can make false claims. Why are they hiding their companies and invoices. Lots of crooks these days.
Report to administrator