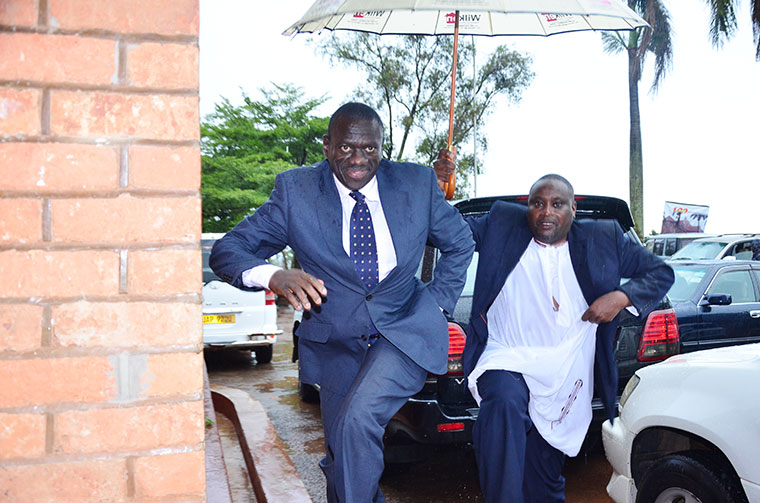 With about a year or two to Election Day 2021, a fractured opposition is caught in an extended public fight over whether they can unite and challenge, as a block, President Museveni’s decades-long hold on power.

The clamour for change has become a momentous and divisive element, splitting friends and uniting foes – lending credence to the cliché that in politics there are no permanent friends and enemies.

The splits and new alliances were on public display last week at the signing of a memorandum of understanding between the Democratic Party led by Norbert Mao, the Social Democratic Party of former Makindye East MP Mike Mabikke, the People’s Development Party of Abed Bwanika and the Truth and Justice Movement of former presidential candidate Samuel Walter Lubega Mukaaku.

“Don’t talk about democracy and stand for four times and on the fifth time you tell people democracy doesn’t work. We believe it works. On that point, I will assert that democracy actually works and anybody who despises democracy is despising the people of Uganda,” Kyagulanyi said.

The pundits say the opposition should expend energies on trying to work together instead of fighting for supremacy within the rank and file. They argue that Kyagulanyi should steer clear of petty quarrels and small parties whose only known members are their leaders.

“There is no hope in this coalition because these people are not truthful; all of them are looking for selfish benefits and I think this coalition is not going to work,” former vice president Gilbert Bukenya told CBS FM radio on Monday.

“I know Mabikke is after something; we had an arrangement with him but again he would go meet other people like [Gen David] Sejusa [former coordinator of security services, who fell out with Museveni]. They are just looking for jobs, and not really doing anything for the benefit of our country, that’s why I left these things and I will never return. They are just wasting our time. They say one thing and do the other; they are always scheming,” Bukenya said.

Though Mabikke strenuously denied it, word had it that the former MP sold his SDP to Bukenya in 2014 as the former VP weighed a presidential run. Bukenya advised Kyagulanyi to abandon opportunistic politicians and instead concentrate on building his political career beyond 2021.

“Many of these guys are just using him; we have seen their faces and they are all failures,” Bukenya says.

“We want to cut a mahogany tree and someone comes with a razor blade... When you look at Bwanika and Mabikke, what can they bring to the table? I’m really shocked by the kind of attention the media gives to non-issues,” Ssemujju said.

“You have fortune hunters who are claiming they are coming together; their parties don’t exist. It reminds me of what Museveni used to complain about when they went to the Moshi conference in Tanzania [after the fall of Idi Amin]. People were forming groups in corridors to participate and begin making demands. I think the opposition should be honest and say if you’re a party that is trying to exist, first exist and then go to the table but they want to start at the table and then try to exist,” Ssemujju said, adding that DP used the memorandum signing to turn Besigye into a punch-line and punching bag.

“Besigye has got shortcomings as a human being but people look at him as a power-hungry politician; who wants to offer himself as president forgetting that he abandoned a job to go to the bush for five years with a group he surely knew he would never lead. Why don’t they concentrate on building a block like they have said and then through a legitimate process make that block a house where everybody will go…But they are extremely excited with a block yet we need very many to build a house,” Ssemujju said.

Zac Niringiye, the former bishop of Kampala diocese, who was at the forefront of the failed effort (The Democratic Alliance, TDA) to find a single presidential candidate in the run-up to the 2016 elections, said in principle working together is a good thing but the devil is in the detail.

“I honestly don’t think that the DP block is a story; tell us what and who is SDP, PDP? Who are the leaders? Let them give you names. Also I recall the confusion during TDA times Hon Mabikke allegedly selling SDP to Prof Bukenya,” Niringiye said.

Asumani Basalirwa, president of the Justice Forum and Bugiri municipality MP, and Francis Zaake (Mityana municipality MP), both kingpins in the People Power Movement, opine that unity is better.

“I support the principle of coming together because remember all these are breakaway factions of DP. If Mao succeeds in bringing them together, that’s great news because we are calling for interparty unity; even within parties they must come together. When you unite, you face fewer obstacles and you win relatively easier than when you are not united,” Basalirwa said.

He said elections are also psychological. A united front, he said, strengthens the resolve of voters.

“There are people who will support us simply because we are organised and united yet there are others who will abandon us because we are disorganised. We must use our manpower for purposes of victory, not participation per se,” Basalirwa said.

Zaake said; “We baldy need unity if we want to cause change in this country but we don’t expect it to come on a silver platter because there are people who think that this struggle belongs to them. Sometimes you have to work with everybody even those you think might have nothing to offer…We are not joining DP but we welcome their unity because it’s a noble cause we believe in,” he said, adding, “We are in a struggle that needs everybody; so, there is no way we will say that somebody is bringing nothing on the table.”

Basalirwa cautioned colleagues against attacking and blackmailing those they don’t agree with.

“The journey we have started of working together requires a lot of respect we should restrain ourselves from name calling. It’s not right in this engagement to continue disrespecting and undermining each other. We must start using a unifying language to entice those we don’t agree with,” Basalirwa said.

He said he disagrees with those who want Besigye to disqualify himself from standing as a candidate again because he has run many times.

“If we are going to unite, it means we have differences and one of the differences is having different candidates with ambition. When you tell another person that retire, what are you going to discuss when you come on the table? If that argument had applied to me, I wouldn’t be an MP now because I had already contested three times and lost. I think whoever wants to stand should be left to express their ambition without stampeding them,” Basalirwa said.

But Zaake insists Besigye and his supporters must hear the naked truth.

“In a family where you have a stubborn kid you don’t need to sweet-talk him…the team of Dr Besigye and FDC are stubborn kids; they think we are young boys who still need to grow up and we are telling them we are already old. We are telling them their weakest point and what needs to be done to address it but they don’t want to listen,” Zaake said.

Dr Sam Kazibwe, a mass communication lecturer at Uganda Christian University Mukono and senior journalist at CBS FM, says Uganda’s problem has not been the failure of parties uniting but, rather, the lack of a critical mass that can aggressively and consistently demand for change.

“Merging by whatever name is not the biggest challenge for the opposition. For as long as Museveni is still a candidate, you would still have challenges with the electoral system and the insurmountable advantages of the incumbency. I think what would threaten the regime would be to have a sizeable population that is aggressively demanding for change that’s the only thing that can give Museveni sleepless nights not parties coming together,” Kazibwe said, adding that parties are wasting time digging at each other.

“During friendly fire in military terms people die. I don’t think it helps their cause to begin name calling now. When people who are expected to work together are tearing themselves apart, others wonder what will happen if they get power,” Kazibwe said.

1234
-1 #31 Malisa Geofrey 2019-04-11 10:41
its DR blackmailing our unity as oppositioions
Report to administrator
+1 #32 Remase 2019-04-11 11:23
Kabakayeka, "Now that the official opposition right now is assured that it is participating in a free and fair election every 5 years in this country, no one must be banned from participating in these democratic elections."

I love you guys. Yes indeed if Uganda holds free and fare elections, why do we need to present one candidate?

Or better still, why do we need to unite under one candidate from all the opposition? We are in a multiparty system therefore let each party and independents present a candidate for 2021, "zabiike."

I'm certain that M7 wont be the winner, but he will be announced as the winner and it will be our beloved Katikiro Mayiga to congratulate M7 and further urge us to accept the rigged election!

The Bishop Lwanga will be the chief guest the M7's 6th inauguration and it will be business as usual! It has just removed the age limit by using the gun when his SFC raided parliament. Mayiga and Lwanga then urged us to have a dialog with M7.
Report to administrator
0 #33 Remase 2019-04-11 11:30
When M7 recently celebrated capturing power by means of the gun, Mayinga came out and told us that because M7 has ruled us for 33 years, he is the best president Uganda has ever had!

Lwanga was the chief guest on that occasion! Now Kyagulanyi is telling us that there is democracy in Uganda and we hold free and fare elections. Therefore it is Besigye who is the problem because he keeps standing and loosing! God have mercy on Uganda,
Report to administrator
0 #34 Remase 2019-04-11 14:48
Fellow Ugandans, we don't need to take a trip all the way to Algeria, Sudan is just a stone's throw from Uganda and this is the latest news, "Sudan’s president steps down."

When M7 recently celebrated capturing power by means of the gun, Mayinga came out and told us that because M7 has ruled us for 33 years, he is the best president Uganda has ever had!

Lwanga was the chief guest on that occasion! Now Kyagulanyi is telling us that there is democracy in Uganda and we hold free and fare elections. Therefore it is Besigye who is the problem because he keeps standing and loosing! God have mercy on Uganda,

In other words Remase, Kyagulanyi has a turkey head/memory: after eating all day long, it can't remember the way back home.

E.g., in Arua last December Kyagulanyi has forgotten who shot his driver Yasin Kawuma point blank, between the eyes.

Like I said, I love you guys. It's all Besigye's fault that Kayima was shot dead by M7's SFC!

Because he keeps standing and loosing! In fact Kyagulanyi told us that that bullet was meant for him.
Report to administrator
1234