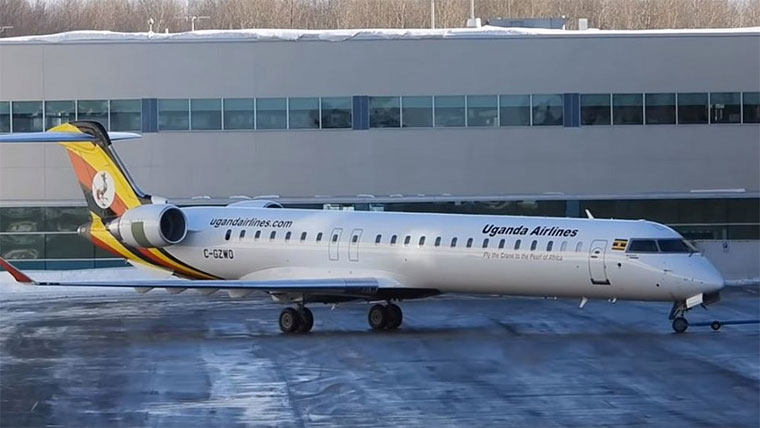 The pilots of the much-awaited revived Uganda Airlines will each earn at least Shs 42 million every month while their co-pilots will receive a monthly payment of Shs 38 million. The money will be in addition to allowances the pilots and co-pilots will be entitled to for every hour in flight.

The revelation was made by Works and Transport minister Monica Ntege Azuba during an interaction with parliament’s Budget Committee, which is reviewing a supplementary expenditure request of Shs 770.2 billion.

Part of the supplementary budget request is to secure the delivery of two Bombardier planes from Canada. The planes are expected to arrive at Entebbe airport next month on April 8 to rekindle the long-awaited revival of the national flag carrier; Uganda Airlines.

Azuba implored government to avail the funds for the delivery of the first two jets as soon as possible, saying Uganda has already come short on its payment schedule. She said Uganda failed to meet the deadline for the first phase in which the two jets were meant to be delivered by February 2019.

The minister added that any further delays means that Uganda will have to incur costs of insurance and parking fees as the planes lie idle with the manufacturer. Azuba warned that the required 280 billion has to be made within the next 6 days by March 29.

Aggrey Bagiire, the state minister for Transport confirmed to the Budget Committee that Uganda Airlines has already finalised the recruitment of 12 pilots and 12 co-pilots, all Ugandans, who have been working with reputable airlines around the world.

"The interviews have been done, we have got their bios, I don’t know, the technical people will tell us whether it is right to put in the papers, the number of hours somebody has flown but they are there. And I want to assure you Mr chairperson, we’re bringing the captains from reputable international airlines who are just coming home to do a patriotic job. And these ones we have been sourcing them. Then the pilots, also they are young men, who have also been around from other airlines and they are being retrained." said Bagiire.

Bagiire’s comments followed demands by legislators led by Usuk County MP Peter Ogwang who demanded the publication of Curriculum Vitae (CVs) of the pilots that have been recruited saying that the country should spend money on well experienced and tested pilots.

Ogwang said the airline has already received enough bad publicity in regards to the type of the procured aircraft and taxpayers should not be spending anymore money on paying and training pilots without the necessary qualifications.

Minister Azuba said that they have been transparent with the revival of Uganda Airlines and that there is no reason as to why they will hide the CVs of the recruited staff. She added that no one has approached them fronting any single person for a job in the airlines. She, however, asked for more time to compile the CVs and present them to the committee.

12
0 #11 Long Walk 2 Freedom 2019-03-25 14:16
In a country where teachers, lecturers, police officers, medics and other public servants at the lower spectrum of the pay scale are under paid and not always paid on time, its scandalous to be wasting money in this way.

Ugandans should ask lots of questions to determine whether the level of pay is reasonable or not?

On the other hand if the airline is a private company they can spend their money as they wish.
Report to administrator
+1 #12 Lakwena 2019-03-25 15:24
Quoting rubangakene:

What will this Ogwang fellow do with pilots' CVs?

Uganda Airlines and Uganda CAA are the right people to decide whether these qualifications are god enough; it is not for every Tom, Dick and probably Mary to view these CVs and use them for conversations at " MARUA sittings" full stop.

Ogwang has never asked for the CVs of people who dug his latrine in the village so he should not concern himself with technical matters. When will these MPs think first before hurtling nonsense?

In other words Rubangakene, whatever has happened to Gwok, to pursue Ogwang and nuisance?
Report to administrator
0 #13 Moses Nsereko 2019-03-25 15:24
It is interesting to note that Uganda Airlines is back.What amazes me is that Minister of Transport, told the nation that the name was bought by unknown person.

I want to know whether the name was bought back by the Government and if it is so how much was paid to him.
Report to administrator
12