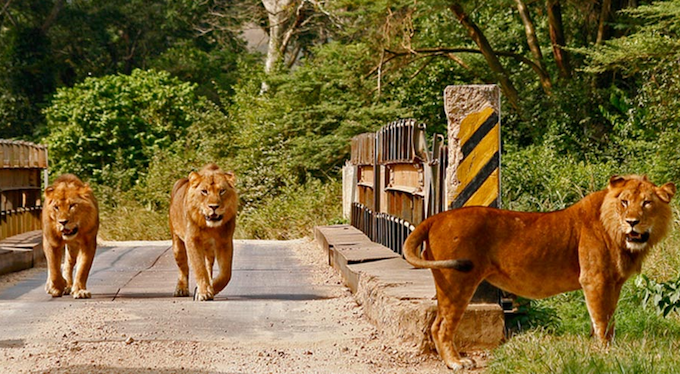 Lions have reduced by 33 per cent in Uganda’s game reserves over the last 10 years. This is according to the findings of a census undertaken in Murchison Falls, Kidepo and Queen Elizabeth national parks.

The finding shows that in the three parks, the number of lions has reduced from 600 to 400 in the past decade. The biggest decline was recorded in Murchison Falls, where the ‘king of the beasts’ decreased from 320 to 130 animals.

The executive director of the Wildlife Conservation Society, Simon Nandipo attributes the trend to the weak legal framework against poaching and wildlife trafficking in the country, human activities which include, among others, wire snares and wheel traps, and conflict with communities neighbouring the parks.

Nandipo says that the animals are trafficked out of the country through the different entry and exit points, including the main outlet; Entebbe international airport.

Lions, after mountain gorillas, are the most sought-after species by tourists visiting Uganda, according to the Uganda Wildlife Authority. Each individual lion in Queen Elizabeth national park generates about $13,500 (about Shs 50 million) per year for the national economy in terms of the revenue. The assessment was based on the fact that tourists are willing to stay longer just to see lions.

According to Nandipo, the remaining population of animals is faced with habitat loss, loss of prey base through poaching and disease, indiscriminate killing by the local communities for medicinal and cultural values, and sometimes, in an attempt to avert livestock losses caused by lion predation.

Nandipo says that the development and the fall in the number of lions is greatly affecting the tourism industry because Uganda is facing great competition from Tanzania, Kenya and South Africa with a better developed industry.

The aviation industry has been one of the transport means that wildlife traffickers have been using to smuggle endangered wildlife species like elephant ivory, pangolin scales, skins and hippo teeth.

Ayub Sooma, the director airports and aviation security at the Civil Aviation Authority (CAA) says they have deployed both uniformed and non-uniformed officers to stop trafficking. He, however, says that their efforts are curtailed by weak laws.

Instead of gathering in Kyankwazi to waste time over something we already know , these people should sit down and discuss how to save our heritage.

Rogers Mukwasi said that Onen was in the business of selling poached meat. That one died.

As it is , Uganda wildlife attracts more tourists than 30 very fat women.
Report to administrator
+1 #2 Olum S. 2019-03-15 16:53
This is devastating news. These beautiful lions each bring far more to the national coffers than your Leaders and MPs as well as the vast majority of us natives could ever dream of contributing.

If these animals are allowed to slowly disappear from our landscape, it will be nearly impossible to reintroduce them, let alone bring them back to their previous population numbers, because humans will steadily and surely encroach onto their territory, and will surely resist their return.

Add into this mix Uganda’s runaway population growth, land pressures, endemic poverty and corruption from top to bottom and you have a deadly cocktail that I truly fear will threaten the very existence in Uganda of these beautiful animals.

And you can be sure it won’t stop there: after lions, will surely follow the elephant, pangolin, rhino, forests etc until we are left dry and barren, with nothing left to traffic or plunder. We have been warned.
Report to administrator
-2 #3 WADADA roger 2019-03-17 17:09
Well, i know that Lions, attract tourists, i hate the way lions they attach other animals in the jungle and eat them alive, let them also feel the taster of their own medicine
Report to administrator
0 #4 Akot 2019-03-18 13:54
Wooden K., agreed!

Uganda animals are like Paris that attracts tourists without which, that city Mayor has no moeny to run it - continued demonstrations by tax payers who cannot live on salaries due to heavy taxes have become enemies because the city is not getting money through tourism!

Uganda wild life is the only thing left for our people & they must protect it, but of course this can only be done if Museveni is thrown out!

So, why are Ugandans just going along with Museveni instead of, as the rest of the world does, UNITE to bring change to defend/protect their land & what it holds to ensure the future?

Well, i know that Lions, attract tourists, i hate the way lions they attach other animals in the jungle and eat them alive, let them also feel the taster of their own medicine

If you're trying be funny, then you have failed miserably.

Lions today are a seriously endangered species across the African continent, their populations are collapsing alarmingly. It is therefore the duty of every nation to work hard to stop this decline.

You ought to be ashamed of your ignorant and childish comment. And once you happily allow one species to disappear from your landscape, don't start complaining when the other species go the same way. And there is not much time left.
Report to administrator