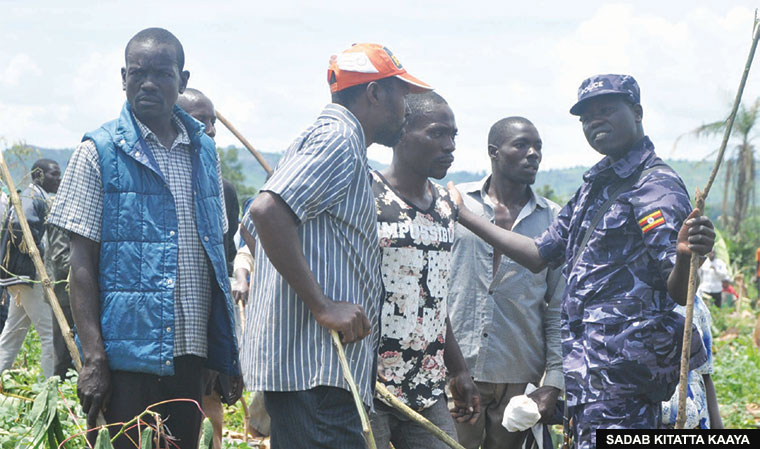 A police officer calms down villagers who were being evicted

On the morning of October 9, 2018, Emmanuel Ssebadduka, a Salt TV correspondent in Mubende, received a phone call informing him about a group of unknown machete-wielding men who had raided five villages in the Municipality’s East division the previous night.

The attackers had slashed crops and knocked down houses in the area in an attempt to force owners off the land.

Ssebadduka with his colleague, Stephen Ssemango Kasozi of NBS TV took a boda boda to the area. But as they began shooting footage of the razed plantations and homesteads, the machete men detained them at a makeshift camp erected on the land.

“We sought to speak to the leader to no avail; our cameras were confiscated and by the time the police rescued us, they had removed the memory cards,” Ssebadduka said.

This case is just an example of the many human rights violations, meted out by gangs hired by alleged land grabbers, seemingly with the aid of security organs, to drive hundreds of people off their lands.

This particular land measures 322.5 hectares and covers the villages of Kambuye, Kanseera, Kikono, Kyabaana and Lwensanga where a one George Kaweesi has evicted more than 3,000 people.

Many of the evictees were resettled here in 2002 after being evicted from land currently occupied by Kaweri Coffee Plantation Ltd -- an enterprise owned by German coffee producers, Neumann Gruppe.

A March 2013 ruling by the High court in Kampala which awarded more than Shs 37 billion to the Kaweri Coffee evictees for having been illegally evicted without adequate compensation offered no lessons to the land grabbers. John Ssettimba, a 30-year-old man, claims his life is under threat after he refused to take Shs 30 million in compensation from Kaweesi for a 36-acre piece of land he jointly owns with his mother, 68-year-old Peragia Nabaggala.

“We settled here in 1994 but last December, Kaweesi telephoned me and told me that he was willing to compensate us with Shs 30 million so that we can vacate his land immediately. Two weeks later, he called again but to tell me that the amount had reduced to Shs 20 million because we had illegally settled on his land,” Ssettimba told The Observer.

Within the next four days, Kaweesi had reduced the amount to Shs 2 million, which he said was to facilitate them to move in less than a week before he gives away the land to a new landlord.

Ssettimba is one of the very few locals still holding onto their land. The faint-hearted vacated after police raided the villages and arrested about 26 locals and two of their councilors to Mubende Municipal Council – Grace Nantobero and Ronald Mugwabi. The councilors were arrested after violent clashes broke out between the locals and Kaweesi’s gang.

Members of the gang had been arrested by the police on October 9, 2018 but all 150 of them mysteriously escaped from police custody and returned to the villages in the dark of the night to carry on further evictions.

The gang leader, Yunus Tabu, a retired UPDF soldier, was killed by the irate mob and the police arrested the 28 residents who are now facing nine charges, including murder and aggravated robbery.

Kaweesi too had been arrested with some of his gang members but all walked to their freedom without any charges being preferred against them.

Last October’s events followed a meeting convened by the Mubende resident state attorney, Richard Birivumbuka, which gave Kaweesi powers to survey the land. This was after local leaders led by Mubende Municipality MP Anthony Ssemmuli challenged Kaweesi to produce proof of ownership of the land.

Much as Kaweesi had procured a consent agreement with former resident district commissioner (RDC) Swaib Lubega Waggwa before the Mubende High court judge Joseph Murangira, questions remained about Kaweesi’s ownership of the land.

According to the land title, ownership of the land changed hands four times on January 10, 2018. Geoffrey Wokulira Ssebaggala, the team leader of Witness radio, a land rights NGO, suspects a political hand in the evictions and the incarceration of the local leaders who joined the locals to oppose the evictions.

“We are wondering why the other group of Kaweesi and his men are not in court for causing murder, destruction of property and are managing kangaroo detention centres,” Ssebaggala said.

Until last week when Ssebaggala applied to the director of public prosecutions (DPP) Justice Mike Chibita to be allowed access to the Kaweesi file, the police had allegedly remained silent about it. Several land rights activists in the district accuse the district police commander, Martin Okoyo, of having been compromised by Kaweesi.

“I cannot say much on phone but that is all false. It is being circulated by a group that is bent on blackmailing me that I was compromised but I can’t be that biased,” Okoyo told The Observer on Monday afternoon.

Meanwhile, attempts by those in jail to get bail have been foiled. On their last attempt two months ago, Justice Murangira rejected their bail request on grounds that their sureties were not substantial apart from Ssemmuli.

The others were rejected by court because the land sale agreements they presented were of low value just like their water and electricity bills.

“We didn’t understand the reason for all this because legally, a surety is required to present a national ID and an LC-I letter. This caused a lot of uncertainty among the locals and advocates for land rights because the grounds for denying bail lacked logic,” Ssebaggala said.