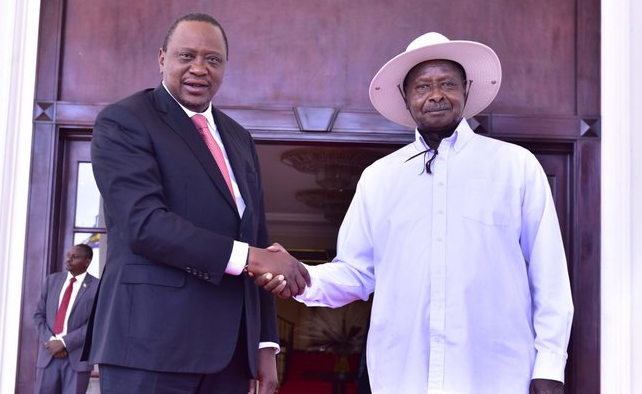 The impromptu bilateral meetings come on the heels of simmering diplomatic stand-off between Uganda and Rwanda. Kenyatta first went to Rwanda and held bilateral talks with Kagame at the Rwanda Defence Forces (RDF) Combat Training Center in Gabiro, Eastern Province where he is chairing the 16th National Leadership Retreat.

When contacted, she refused to divulge whether Kenyatta and Museveni discussed the snowballing diplomatic row between Uganda and Rwanda.

Rwanda, about two weeks ago closed its Gatuna border in Kabale district, reportedly to upgrade their one stop border post. The move, was, however construed as an attempt to slow down or stop entry of Ugandan goods in Rwanda. Both countries have continued to counter-accuse each other of plotting to destabilize one another.

Over the weekend on Saturday, both presidents warned that they were prepared to counter with might, those plotting against their countries.

Museveni while commissioning factories in Mbalala in Mukono district said that ”Uganda is now stable and I have said before that those who try to destabilise our country do not know our capacity. It is big. Once we mobilise, you cannot survive if you are a trouble-maker.”

If you start fires your fingers can get hurt.

We are reckoning that you committed some sins and that you are the sinner,and this is fallout from your sins Repent man,repent!

Do not disturb our good and loving man whom we call Father of Uganda and one of the First of Africa Repent,even kneel down the sinner.
Report to administrator
0 #3 Concerned Ugandan 2019-03-12 09:30
Quoting Wainainchi:

... Do not disturb our good and loving man whom we call Father of Uganda and one of the First of Africa Repent,even kneel down the sinner.

This comment characterizes the problem perfectly. In both Rwanda and Uganda we are suffering from the problem of personality cultism of the presidency.

I can bet you that if both Rwanda and Uganda was under different leadership with both the current leaders having retired we would not be facing this problem.

- Museveni conquered Uganda in 186 & has already made it clear it's him & no other to rule!

- Kagame was vice president/minister of defense for 5 years before becoming president in 2000 & will rule till he dies of old age!

Are Kagame/Museveni the kind of rulers Kenyans will be at ease with & want their president to go to parties with to discuss their future, friendship, living together...?

How does Kenyatta in power since 2013, explain his meetings with lifetime rulers Kagame/Museveni to Kenyans who must now be so so worried as to how their next election will be?
Report to administrator
0 #8 Kihumuro richard 2019-03-12 20:09
Lets accompany together because one of the most important thing is Trade, when we stop corperating with one another then it means we have run backwords,so we should be friendly to one another
Report to administrator
+1 #9 Lakwena 2019-03-13 08:05
In other words, Kenyatta now overshadows and morally towers over and above the belligerent Mr. M7 and Mr. Kagame.

From an African perspective, it is unthinkable and despicable for a younger man like H.E Uhuru Kenyatta, to mediate between grumpy oldies like Mr. M7 and Mr. Kagame.

Shame on Ugandans and Rwandese vis-a-vis their petty, coldblooded and cantankerous leaders.
Report to administrator