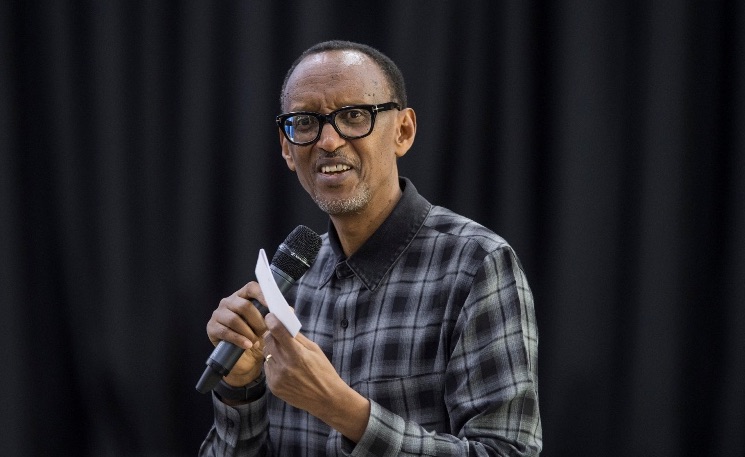 Rwanda President Paul Kagame has warned his enemies in the south (Burundi) and those in the north (Uganda) that they may possess the capacity to kill him, but they will never bring him to his knees.

In a well orchestrated address to his leaders on Saturday at the 16th National Leadership retreat - obviously aimed at communicating his message across the East African borders, Kagame said he is perturbed by Uganda’s insistence on trying to bring his leadership down.

Kagame said for now 20 years since 1998, Uganda has been plotting, working with Rwandan dissents to bring  down his government as was revealed in Gérard Prunier’s book; From Genocide to Continental War. He said this has been ”the cycle of things that have been happening for the last 20 years. While we sit here trying to revolve, there is someone sitting there saying we shall not allow you.”

Kagame said that he has no regrets for the killing of Seth Sendashonga in 1998 for plotting with Ugandan security to bring down his government.

Speaking in combined Kinyarwanda, Swahili and English, Kagame said he has personally engaged Uganda President Yoweri Museveni on several occasions about Uganda offering Rwanda’s enemies refugee and a ”free hand to recruit”, but Museveni has continually shown no will or desire to act otherwise.

Adding: ”So you can destabilize, attempt or even do it actually. You can do us harm, there are many things people who wish you ill, many things, bad things, there are many things they can do. You know, even at a personal level, you can kill somebody, you can shoot me with a gun and kill me. That is a possibility for some people, but there is one thing that is impossible, that cannot happen to me, and I wish it should’t happen to our country. Nobody, anywhere can bring me to my knees. Absolutely not.” Kagame said.

Kagame said he has severally ”begged” an adamant Museveni to stop plotting against his government, because in his view he doesn’t see how Uganda would benefit from it, but Uganda has simply carried on.

And as we reported this week on Wednesday, Kagame confirmed that the strained relations with Uganda were worsened by President Museveni's inaction towards Rwandans dissents. He cited a one particular case of Rwandan businessman, Tribert Rujugiro Ayabatwa who fell out with Kagame and now has several investments in Uganda.

”[For] Rujugiro one time he [Museveni] told me. First he told me he doesn’t know Rujugiro, so I had to prove to him that he knows him. So that matter was resolved….He told me the problem with you Rwandese, you need to know how to differentiate between politics and business. And I told him; 'thank you sir, but sometimes business and politics have no dividing line. And I was trying to say; if somebody is giving money to others to destabilize another country is that normal business? Even this time I told him, I’m leaving it to you to resolve.” Kagame said.

The Rwandan government believes Rujugiro is pumping money into subversive activities being carried out on Ugandan soil against Kigali. Rujugiro is the man behind the Meridian Tobacco Company, a $20 million (Shs 72 billion) operation which opened in the West Nile town of Arua last year. The Arua plant is a subsidiary of Pan-African Tobacco group, the manufacturers of Supermatch cigarettes.

But even when he personally engaged Museveni, Kagame said, Museveni first feigned ignorance, claiming that he doesn’t know Rujugiro. And when he presented Museveni with facts, Kagame said Museveni told him that he will handle the matter.

Kagame told his Rwandan leaders that the reason he was revealing to them such sensitive information in regards to his high-level interactions with Museveni especially at the time when relations between the two countries are at their worst in recent times, is because they must ”deliver in action for our people who are waiting for us.”

Rwanda has over the last two weeks closed its borders with Uganda, restricting movement of goods into the country and blocking its citizens from leaving for Uganda. It has also heavily deployed along the borders and also destroyed several foot bridges that Rwandans had erected to help them cross into Uganda mostly for food, education and medicine.

Kagame said Rwanda would prefer to have relations with countries where there is honesty and mutual respect for each other because Rwanda are ”honest allies.” However, he said Rwanda would also have no problem with another country that chooses to ignore Rwanda because Rwanda will also ignore that country. Likewise, if the country chooses to bring a fight against Rwanda, Kagame said his country will have no choice but to prepare and divert resources to build capacity to guard against such activities.

Earlier on Saturday, Museveni while commissioning factories in Mbalala in Mukono district said that ”Uganda is now stable and I have said before that those who try to destabilise our country do not know our capacity. It is big. Once we mobilise, you cannot survive if you are a trouble-maker.”

Kagame said Rwandan businesses and local leaders have brought shame to Rwanda for failing to provide the necessary products and social services that their citizens need - making Rwanda "vulnerable to blackmail" and dependent on some countries for things that they can do themselves.

For Rwandan businesses, he said they are manufacturing below capacity and over price their products expecting his government to block the inflow of foreign products, something he said he can’t do.

Kagame said he finds it shameful and extremely wrong that Rwandans are crossing to Uganda for the simplest of things like water, food, healthcare yet his government has invested heavily in such services and are praised world over for their efficiency. Since the closure of the borders about two weeks ago, Rwandans near the borders have continued to sneak into Uganda for medicines, education, food among others.

”What happens to the mayor who see children in hundreds crossing borders?” he asked.

”Suppose the other side had arrested them like they are arresting people [now]? Would you come to us, rushing to us that our children have been arrested in Uganda. The first question would be what were they doing there in the first place? Ministry of Education, Health, ministry of local governments. You find it normal that nobody should be bothered about. Do we need children to cross borders for schools? During the day they are on one side and in the evening they are back and they are probably getting the same quality education.” he said.

Adding; ”They are hitting us in our face and have our people arrested for services that they ought to be getting here. We think we’re making progress until somebody tell you we can’t let you have it.”

On the closed borders with Uganda especially at Gatuna, Kagame urged the responsible departments to quicken up the expansion works so the border post can be reopened as soon as possible to operate at full capacity again. He said goods from Uganda have not been blocked but only Rwandans have been stopped from crossing into Uganda because he cannot guarantee their safety while they are in Uganda.

”Is there a way of speeding it up [clearance of Ugandan trucks] while you do your constructions as easily they should be so that at least we remove this excuse because there are bigger issues we should be dealing with other than the closure of the border.” Kagame told the minister responsible.

Kagame said although he initially found one of his officials, James Kabarebe’s statements unnecessary then when he questioned what Rwandans wanted to do in Uganda, he said he now finds it "validated" because since then more arrests of Rwandans have happened.

”For the last two years, we have been discussing. This has resulted in Rwanda advising Rwandans not to travel to Uganda. And from that time, more have been arrested. I have raised it to the highest authority personally and he can’t and doesn’t want to do anything about it, so you understand the situation I’m in.” he said.

”Those who have not yet gone there [to Uganda], I can only advise you not to go there. If you don’t want problems of which you will come looking for me, just don’t go there.”

”The best way to live in Uganda is to say you’re against the government of Rwanda or you’re fighting the government of Rwanda. Then you’re safe there…By they way, we have evidence and I have discussed it with my counterpart in Uganda, there are meetings we had in Addis Ababa during the summit. We met twice in two days during the summit. We met directly and I raised this. I left him to dealt with it, he promised me that he’s going to look into it.”

Rwandan security have been whipping Rwandan nationals who managed to sneak into Uganda and crossed back since the closure of the borders.

This is why Ugandans MUST UNITE & throw Museveni out to stop him & Kagame using the country as battle field to show which is more man than the other!

Ugandans must know Kagame has made home for rwandese with him & the outside world know how Rwanda is developing fast!

But Museveni wants to make Uganda home for rwandese with him, to show Kagame he too, is a ruler while destroying Ugandans!

Developed world is alright with Kagame because he has put in place real development projects for his people who still want him!

Every news from Rwanda is about development & what has been achieved & they seem to want to go along with Kagame's programme!

Why do Ugandans go along with Museveni, especially when they must know he only wants the country for rwandese not wanted by Kagame?

EU-UN...give millions for refugees in Uganda, but don't even talk about how Ugandans live, right?

Lots of bad things were done by Kagame & Museveni, may be today they want to use their past to make their stand & Ugandans are letting Museveni use their land, their tax money, their army...to what end?
Report to administrator
-1 #23 Akot 2019-03-12 20:48
Juwait kali, thanks!

It's more worrying Ugandans don't see the country belongs to them & they MUST UNITE to take it back!

Why are tribal leaders still helping Museveni make tribally divided & ruled Ugandans powerless when UNITY will give chance to to throw Museveni out then:

- Reformation of the Republic, or

Why do Ugandans let Museveni destroy them when they are not at war with each other?

Why are Ugandan army/police used by Museveni to terrorise their own people & protect the common enemy of every Ugandan?

How will Ugandans restart when Musevnei will be no more?
Report to administrator
0 #24 rubangakene 2019-03-14 23:12
A brilliant broadside, a well thought out. deliberate retort from an educated man.

You have stated your case for the world to see exactly what they only thought was going on; well spoken!
Report to administrator
123