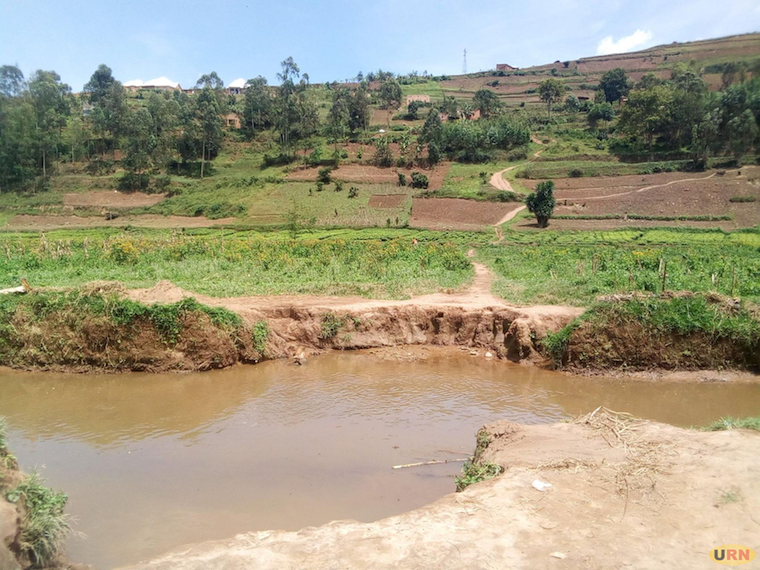 Small bridges at the Uganda-Rwanda borderline have been destroyed

Rwanda has reportedly destroyed all temporary bridges erected by Rwandans along Uganda's borderlines in Katuna, Gatuna and Mukensiyoona in Katuna town council in an attempt to prevent Rwandan nationals from crossing to Uganda.

The development comes amid increased tension between Uganda and Rwanda. For the last one week, the Rwandan border at Gatuna in Kabale district and Chanika in Kisoro district have been closed, blocking entry of hundreds of cargo trucks transiting through the busiest crossing point to Kigali and several other destinations.

Rwanda government, instead advised cargo trucks to turn-back and use Mirama hill border in Ntungamo district a distance of about 100km away. Amid the chaos, Rwanda, through its minister of Foreign Affairs and International Cooperation, Richard Sezibera barred Rwandans from crossing into Uganda, saying Rwanda couldn't guarantee their safety. He also accused Uganda of harbouring dissidents planning to topple the Kagame administration.

John [other name withheld], a Rwandan national found at Mukensiyoona market after escaping from Byumba in Northern Province, Rwanda to buy food, says that all the temporary bridges at the streams separating the two countries have been destroyed and that the security personnel are whipping whoever attempted to cross into Uganda.

John said Rwanda's continued blockade has left Rwandans stuck without food to eat, and that most Rwandans are totally unhappy about the current situation.

Deus [other name withheld], another Rwandan national says that he crossed into Uganda via Katuna on Tuesday to offer casual labour in return for food so he could feed his family, but on returning, he found all bridges destroyed. He says for now he decided to remain in Katuna in fear of being reprimanded for crossing to Uganda.

Jean a resident of Byumba in Rwanda says that the prevailing situation has forced him to cross back to Rwanda after witnessing from a distance how those who were caught crossing with food from Uganda got whipped by the security officers. He added that security officers poured paraffin into some of the food that had been bought by some of the residents.

Solange Mujawimana, a businesswoman dealing in agricultural produce is also stuck on the Ugandan side of the border. She says that although she used to buy foodstuffs from Uganda and sell them in Rwanda, her movements have now been restricted.

Katuna town council mayor Nelson Nshangabasheija says that tension is still mounting across the region. He adds that business at the border post has completely collapsed.

Speaking before parliament on Thursday, Prime Minister Dr Ruhakana Rugunda explained that Uganda is optimistic that the matter will be soon resolved.

We don't exactly know how this game of hide and sick will end .But if this misunderstanding attains a level of human folly, we shall not tolerate any foreign domination as was the case in 1979 when foreign troops looted,raped and murdered Ugandans.

Not to talk of 1986,when saw those who came as refugees becoming high ranking officials in the gorvnment and security apparatus.
Our own problems will be solved by ourselves.
Report to administrator
-4 #12 Good Man 2019-03-10 20:11
Yea, the fact remains that President Kagame understands leadership more than President M7.

He's right to close his boarders to avoid a lot of nonsense going on in Uganda. While people are dying in Ugandan Hospitals without drugs,

In Kigali drugs are delivered by drones in different areas. at least 87% of the population has access to Health Care. In Uganda the rich runs to Nairobi and India. What a shame?
Report to administrator
+3 #13 Kirya 2019-03-10 22:32
Museveni talk to your brother. You are
from Rwanda.

It’s engineered to divert public attention from the real issues facing Ugandans. They are playing us.

Let’s focus on core issues like pushing through electoral reforms. Giving incentives to M7 & cronies to plan their retirement such as offering Museveni and his close family & associates immunity from prosecution & asset seizures.

This should be tabled in Parliament. SsegaSpirations - Self Appointed Chairman of the #People_Power Economic & Political ThinkTank.
Report to administrator
0 #15 PP Think Tank 2019-03-11 14:40
The WikiLeaks expose of 2011 let some Dirty little secrets out, leaving many world leaders exposed. For example
Laurent Kabila, the deceased DRC leader, had accused Museveni and Rwanda’s Paul Kagame of a hidden plot to build a Hima-Tutsi empire. So why would they engage in war to threaten this? If war breaks out between the two countries, it’s sole aim would be to bootstrap the Huma-Tutsi empire against the threat or a wanainchi uprising. #Mwebereremu mu ndowooza.

It’s engineered to divert public attention from the real issues facing Ugandans. They are playing us.

Let’s focus on core issues like pushing through electoral reforms. Giving incentives to M7 & cronies to plan their retirement such as offering Museveni and his close family & associates immunity from prosecution & asset seizures.

This should be tabled in Parliament. SsegaSpirations - Self Appointed Chairman of the #People_Power Economic & Political ThinkTank.

In other words, crime without punishment is the antithesis of justice and/or fairness.
Report to administrator
12