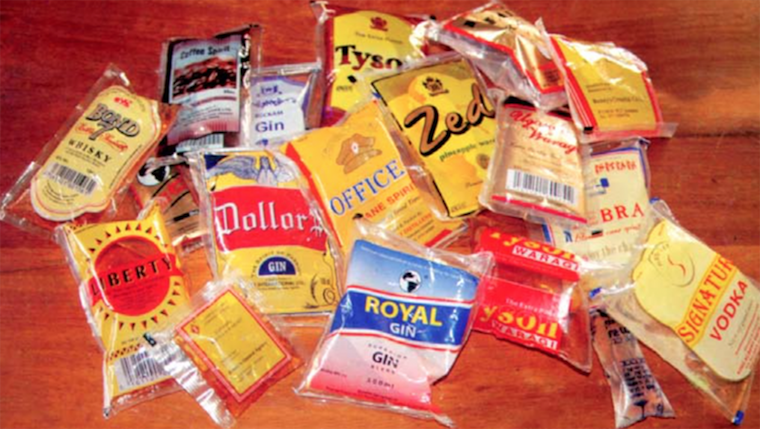 Some of the waragi sachets sold in Uganda. Photo: ugandavanguard.com

High concentrations of hazardous metals have been found in a number of alcoholic spirits consumed in Uganda. The finding is a result of an intensive electronic analysis of samples of different spirits consumed by Ugandans.

The scientific study was commissioned and conducted in a US laboratory by Dr Olara Otunnu, the former under secretary general of the United Nations and also former president Uganda People's Congress (UPC) party and two leading members of the academia in US State of California.

The two separate laboratory analyses were performed on 17 alcoholic gin samples collected randomly from various places in Uganda over a space of two years. The samples were subjected to intensive heating of 93 degrees centigrade for two consecutive hours before they were analyzed for concentration of heavy metals.

It also involved the use of samples of locally brewed Lira-Lira gin randomly collected from around Nsambya police barracks in Kampala, Teso bar in Lira Town, Awere and Bolo trading centres in Omoro district in northern Uganda alongside 13 samples of gins blended and packaged in sachets of 100-millilitre quantities each.

The gins were analyzed against a Scottish Whisky bought from San Diego in the United States of America and against standards set by the Uganda National Bureau of Standards (UNBS).

They were tested for the presence of silver, arsenic, aluminum, barium, beryllium, cadmium, cobalt, chromium, copper, manganese, molybdenum, nickel and lead. The others are antimony, selenium, tin, vanadium, thallium, strontium and zinc.

In their findings, the chemists concluded that alcohol consumption in northern Uganda is significantly increasing health risks. They say quantitatively, they found copper presenting the highest concentrations recorded in any spirit brand studied, followed by barium and manganese.

"Quantitatively,copper had the highest concentrations recorded in any spirit brand, followed by barium and manganese which were higher than the combined levels of selenium, arsenic, nickel, vanadium, chromium, and tin in all brands" it states.

The brands found to contain the most metals mainly copper were the locally distilled Lira-Lira spirits with concentrations averaging 95 per cent. The study says that the levels of copper in the brand exceed the World Health Organization (WHO) guideline value of 2,000 micrograms per liter by almost 100 per cent in samples from Awere and 6,000 per cent in Teso bar samples.

"Excluding copper levels from the Lira-Lira spirits exposes the Relax brand as the most contaminated of all samples," the chemists wrote in their journal article.

They concluded that there is a direct relationship between high mortality rates being experienced in the Acholi sub-region and consumption of the 17 spirits contaminated with heavy metals. In Uganda, food contamination by heavy metals is recognized as a serious health risk but not alcoholic drinks to the same extent.

Assumptions of the study

The study assumed that a contaminated alcoholic drink exposes a consumer to a mixture of metals which could potentially interact and produce synergistic effects in humans.

They observed that in blood, for example, non-essential elements such as thallium, nickel, and aluminum are strongly competitive with elements required for the proper functions of the body such as calcium, magnesium, zinc, selenium, Mn, cobalt, chromium, and molybdenum.

It also assumed that an adult in the study area consumes 2.5 times a 100-milliliter of 40 per cent ethanol by volume sachet per day. For comparison, one standard alcoholic drink by the World Health Organization is a 30-ml volume of alcoholic drink.

It says that the overall picture of metals contamination in each waragi brand is, therefore, important to understanding the potential health risks associated with a waragi brand. It says no amount of alcohol appears to be safe, adding that 34,000 cancer-related deaths were attributed to light drinking in a study published in 2013.

"On the other hand, alcohol consumption is also associated with a decrease in cancer of the kidney and non-Hodgkin lymphoma. These benefits, however, are outweighed by harms done" the study report says.

The study calls for further study in the area and recommends that public education about the health risks of excessive alcohol consumption must be intensified. It adds that second, fun and productive socioeconomic activities must be developed to engage people away from excessive drinking.

According to the study, the biochemical roles of heavy metals in various oxidative states in cellular destruction are well known. Copper redox-coupled with iron, for example, is implicated in enhancing oxidative stress leading to premature ageing.

The researchers state that toxic metals and organic pollutants in most cases are carry-overs from the production processes although some are acquired through exposure to polluted environments.

They say that lead is not a major health risk in Uganda's waragi in comparison to other heavy metals also found in waragi, or ethanol. They hope that their findings will help authorities in Uganda in developing the necessary and appropriate alcohol quality assurance standards and enforcement policies to minimize health risks associated with unsafe alcohol consumption.

Why US laboratories and why disgraced Olala Otunu??

Wow, I wasn’t aware that ‘Olala’ Otunnu is disgraced.