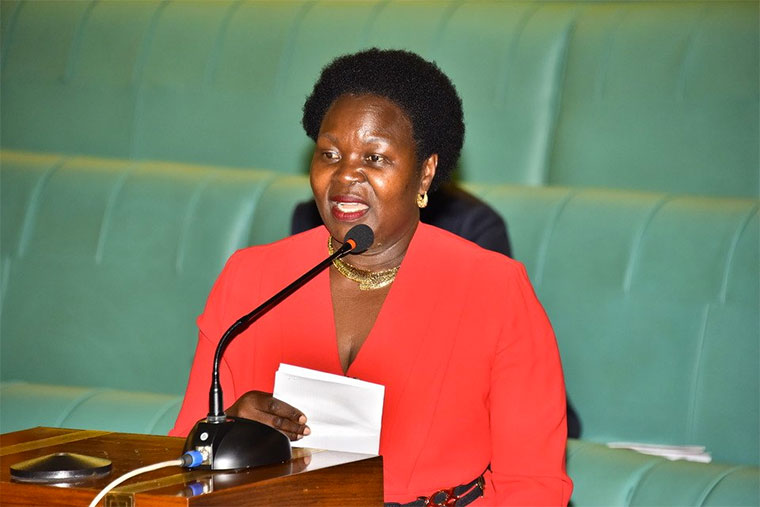 The ruling NRM party leadership has another worry: plugging the leaks within its ranks and finding the lawmakers who blew the whistle recently on a hushed cash distribution operation for MPs who supported the removal of presidential age limits in 2017.

Interviewed about the cash handouts, the party’s treasurer Mariam Naigaga (Namutumba Woman) said at the weekend, “I swear; I have heard about it but I have no knowledge about it.”

On Tuesday, January 8, all 317 MPs who supported the constitutional amendment that scrapped the presidential age limits were invited to a residence in Bwebajja on Entebbe road to receive the final installment of their Shs 200 million package.

It was a quietly and carefully knit operation but a leak hugely embarrassed the ruling party leadership, according to an official of the NRM parliamentary caucus who declined to be named.

In 2017, MPs received Shs 140 million in two installments as sweeteners to muscle through parliament the Igara West MP Raphael Magyezi’s private member’s bill that removed Article 102 (b) from the Constitution, which capped both the upper (75 years) and lower (35 years) age limits for presidential candidates.

The article was the last hurdle to President Museveni’s re-election bid in 2021. The president will make 75 years of age in 2021 and, therefore, would have clocked the mandatory upper age limit for eligible presidential candidates.

After the amendment was passed in December 2017, the 317 MPs were hosted to a luncheon at State House Entebbe and were promised that they would get the balance of Shs 60 million early in 2018.

The long wait ended on that Tuesday when the caucus leader invited the 317 MPs by telephone to receive the money. To conceal the activity, the caucus leaders reportedly first used an Asian moneylender to distribute the money but their cover was blown when one of the 27 NRM MPs opposed to the amendment was mistakenly called to pick his share.

“We are trying to investigate how it came about because we created a separate list of the 317 MPs. There is no way we could mix up names because after the Mobile Money Tax bill, we created another list of 154 MPs [that supported the mobile money tax] so that we can be sure of who we are dealing with,” a source close to caucus executive told The Observer on Friday.

After the leak, the cash distribution base was moved to a residence in Bwebajja along Entebbe road. Besides pointing the finger of blame at rebel MPs, the caucus leadership also suspects that some excited beneficiaries of the cash may have let the cat out of the bag.

“There is no money that I know of that has been given to members, and they can’t give out any money without me knowing as the vice chairperson of the caucus,” Silwany said.

“That is blackmail being spread by the media to tarnish the integrity of NRM MPs, the president and the mighty party – NRM,” he added.

However, several MPs interviewed last Wednesday confirmed they had either received or were waiting for their turn to go get the money.

“They called me, I am in the process of going for it,” Lugazi Municipality MP Isaac Mulindwa Ssozi.

Some MPs were, however, not happy that they were given only Shs 45 million instead of Shs 60 million. Some 20 MPs reportedly declined to take anything less than the full amount. A source, however, accused this particular group of politicizing the matter. He said the leadership had communicated the cause of the shortfall.

“We were told that not enough money had been availed and it was up to us to choose either to take the Shs 45 million or wait for the full amount,” the source said.

One youthful MP said he had not picked the money because he feared to be caught on camera.

“They have called me, but I can tell you, I can’t go there to be captured on their cameras. There are personal considerations I made to vote for the amendment but I am more cautious about my images being used somewhere, somehow,” the MP said.

In the interview, Silwany suggested that the MPs who confirmed receiving the money could have confused their parliamentary salaries for the age limit cash.

“Those MPs just want to brag, you know our members; they come from different backgrounds… what I know is that parliament paid salaries last week, and also, MPs do business,” Silwany said.

The caucus’ treasurer, Mariam Naigaga (Namutumba Woman), told The Observer last Wednesday that she had heard about the money but had no details.

“I swear; I have heard about it but I have no knowledge about it,” Naigaga said.

Later, it was understood that she got sidelined since she voted against the mobile money tax. A well-placed source said the party leadership decided to strip her of all benefits attached to the position as an internal disciplinary measure.

“She is a member of the executive of the NRM caucus, we agreed that we support the mobile money tax as one of the avenues of bringing in more money, she voted against it and we decided to discipline her by not involving her in our activities, and taking away her benefits,” the source said.

“We couldn’t sack her because she holds an elective position; that is why we left her with the position but without any activity nor allowances,” the source added.

Last October, chief whip Ruth Nankabirwa warned that Naigaga would face some NRM sanctions for voting against the agreed position on the mobile money tax. Though Naigaga insisted that her decision leaned on the views of her people of Namutumba, Nankabirwa believed she had joined the growing problem of individualism among NRM MPs.

Silwany, however, said on Monday that no disciplinary action had been taken against Naigaga.

“It is not true, Mariam Naigaga, Woman MP Namutumba district, is still doing her work as treasurer of NRM parliamentary caucus and she is happy,” Silwany said.

The game is called "DELAY AND DENY". First you take time to do something then you deny having even given such thing any thoughts at all!

NRM´s tactic of delay-and-deny is not new; it has been used over and over throughout its grip on power.

Something however will one day give. So much money given out whilst we perish in substandard healthy wards; improvised grass-thatched classrooms; drinking cholera infested water-sources; and all for what?

A man who practically slept in silk sheets and bathed milk? He was found in a hole! With only one small bottle of water! Esteemed MPs please don't sell out your country. The voters are watching...
Report to administrator
+6 #4 rubangakene 2019-01-16 20:51
"The road to hell is paved with good intentions"; go on and take the devil's shilling and you will burn in hell!

The sheer shame and greed of our NRM MPs is beyond belief. Hospitals have no medicine, cholera and other diseases are decimating the ordinary citizens, children are still attending classes under trees, school going children are starving and roaming the streets like zombies, the list of "these atrocities" is endless and because of one man's greed to stay in power these MPs slip quietly to some private residence to haul bundles of "stained monies".

Does it meant that NRM must not be rewarded for their oatritusm and loyalty to their country and that those who oppose the government and NRM can get any foreign money and that us Ok?

Just question to 5hos3 raising their eyebrows.NRM ! Give money to your faithful and fo notbe ashamed.

We are on a journey and such stuff is expected, time will come and all beneficiaries will apologize to Ugandans.

I recall watching the nrm mps denying ever receiving any sum on tv.

They were always saying provide evidence, when you fail to name your source, they would say hearsay...

In normal circumstances apologizes are unacceptable. These people MUST lift their cross. That money could have been used for essential services. These people have no spirit.
Report to administrator
+2 #7 kabayekka 2019-01-17 09:57
One hopes the Governor of the Bank of Uganda and the Minister of Finance are well aware of how the tax payer's money is being used as classified funds for political advantage?
Report to administrator
+1 #8 Remase 2019-01-17 13:13
The key question is, if that is what was paid to the MPs, how much was paid to our honorable con-court 4 judges who upheld the amendment?

It is clear that they were paid also, because M7 cant lease any uncertainties whatsoever. He makes sure that all I'S are doted and all T"S are crossed.

It is also based on the fact that M7 cant pay that that kind of money to the MPs without making certain that the judges would do the same. Therefore, the on going hearing at the supreme court court is also a foregone conclusion. CJ Katureebe cant over turn the concourt ruling based.

The balance which has been given to NRM MPs wouldn't be paid if M7 wasn't sure of the outcome from the supreme court. M7 is corrupt to the core and always focuses ahead of us. The supreme court judges have already bagged their money and they will uphold the concourt ruling. Take that to the bank.
Report to administrator
0 #9 rubangakene 2019-01-18 20:00
If it is true that these MPs are receiving this monies, then the Uganda Revenue Authority should tax Income Tax on the said money at a rate of 40%.

You see these are the same MPs who passed the law to tax mobile money transfer. If they are taxed heavily on these illegal "easy hand-outs", may be next time they will vote with their hearts.
Report to administrator
+1 #10 Omuzira Ente 2019-01-19 17:19
Its those who own property today that need a smooth transfer of power through respecting the Age limit and allow the new generation of their sons and daughters to take charge.

If that fails history is the best teacher. What happen to Obote twice and Amin will befell NRM and nobody will like especially those who are power now.

Those who will overthrow NRM are NOT in opposition, they are in NRM top ranks and what they will do to their colleagues including those passing bills will be disaster.

So fellow Ugandans let us be sorber as Kenyans and Tanzanias so that we retire our former leaders in good faith and they live to enjoy their sweat in Uganda NOT in exile is it will definitely happen.

Obote was overthrown by his soldiers in both instances starting with his top Gen IDI Amin and the Gen Lutwa for the second Term NOT by NRA.

The North-South divide that has divided the country into the rich and poor regions is a timed bomb we are seating on.
Report to administrator