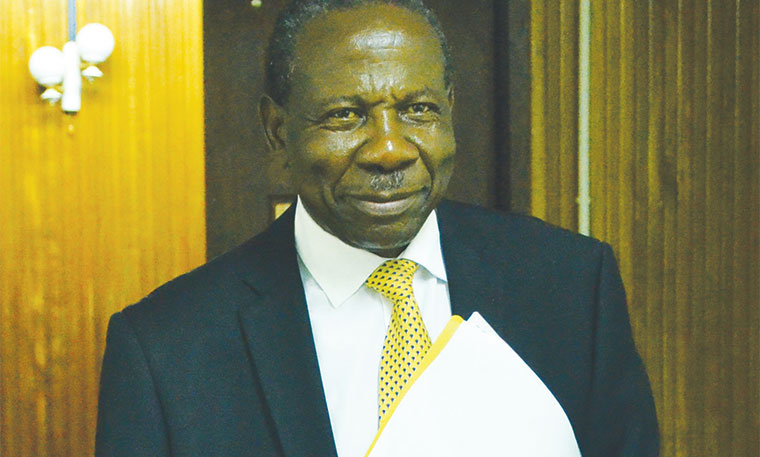 China will not take over Uganda's assets because of failure to pay back loans, Finance minister Matia Kasaija has said.

Kasaija says Ugandans shouldn't be at all worried because all the money owed to China shall be serviced thanks to the smart investment decisions being made by government officials. Uganda owes China $1.6bn (about Shs 6 trillion). Kasaija said Uganda's economy is growing at a faster pace, adding that unless there is a catastrophe, nothing will stop Uganda from servicing the Chinese loans.

The debt owed to China arose from infrastructure project financing for the Kampala-Entebbe expressway, Isimba hydro power project and the ongoing expansion of Entebbe international airport.

In his recently released report, the auditor general warned that Uganda was at risk of losing some of its national assets as some unfavourable conditions such as losing sovereignty over national assets had been attached to some loans.

In recent months, there were reports in international media that China wanted to take over Zambia's airport and national power distributor due to the country's failure to service its loans.

Last year, China took over Sri Lanka's port for 99 years due to loan default. Kasaija said takeover of national assets can happen anywhere else but not Uganda.

"China taking over assets? I don’t know. I have heard but in Uganda I have told you as long as some of us are still in charge, unless there is some catastrophe which I don’t really see at all that will make this economy going behind, I want to assure you the economy is now on [track]. And it is possible, am talking about China taking over assets, they can do it elsewhere but here I don’t think they can." said Kasaija.

The minister said government is investing the loan money in critical sectors with quick returns that can in turn be used to pay back debts. These sectors, Kasaija further argued are buttressing Uganda's rising economic growth. The economy grew at 6.1% above the 5.8% projection last year financial.

"I have told you precisely that we are doing that only," he said.

Kasaija said Uganda prefers getting bi-lateral loans from China Exim Bank and Japan International Corporation Agency (JICA) because they offer preferential terms with grant element that range between 20% and above 35%.

The debt levels are below the international sustainability thresholds 50% debt to GDP and significantly below the sub-Saharan average (45.4% debt to GDP). But Uganda is further courting China for a $2.23 billion loan for the Standard Gauge Railway (SGR) project.

In the past months, Kasaija has been saying Uganda submitted all documents to Exim Bank of China and are waiting for a final call from Beijing to ink agreement for SGR loan. If Uganda is given this loan, it will hastily push Uganda's debt past the 50% threshold.

Uganda further plans to fund oil projects such as roads, pipeline and refinery construction through loans in the coming years. But Kasaija insisted that he will not allow debt ratio to surpass 50% of GDP.

"We’re very cautious. If we find that we’re getting near the threshold we’ll hold back. We shall not hesitate to hold back. We shall hold back. We’re not reckless, by the time we take these loans, it takes days and nights - writing to check this and that. So we’re not going to lead your country into debt recklessness…we’re there for you. Don’t worry" he said.

That is: The heavily indebted poor countries (HIPC) are a group of 37 developing countries with high levels of poverty and debt overhang which are eligible for special assistance from the International Monetary Fund (IMF) and the World Bank.
Report to administrator
+1 #2 kabayekka 2019-01-09 05:51
Unless this very poor African country understands that China is an International lender within the World Bank Group so that there is hope to stop cash outflow from the money making projects to pay international expensive debts.
Report to administrator
+1 #3 kabayekka 2019-01-09 06:29
What seems to come out of all this financial confidence building in Africa over very good international Chinese debts is the fact that HIPC for the Western countries has been attached with democracy in these very poor countries!
Report to administrator
0 #4 Lakwena 2019-01-09 09:27
In the footsteps of his self-conceited boss, Mr. M7, Hon Matia Kasaija is in the that office only fighting for himself, family and belief.

Look at the sheepish smile on his face! He just doesn't give a damn who will pay the (debt) surplus borrowing. Most of which are funneled into their pockets thru dubious means: kickbacks and side kicks.

E.g., since Mr. M7 finally made a categorical and Public Disclaimer that he is in State House only fighting for himself, family and belief; what more do Ugandans expect from him and/or socio-economic and political activities?

He even made it categorical that he is nobody's servant or employee; how do Ugandans still think that the money being borrowed is for their own good.

We are in a BS, shithole country!
Report to administrator
0 #5 Lakwena 2019-01-09 09:51
With one side of the lying mouth, Mr. M7 tells Ugandans to be frugal and patriotic. But with the other side of his honest mouth, he tells them off that he is in there, only fighting for himself.

What a pile of crap/BS!

Besides, although "discipline" is Mr. M7's lingua frank, but he is the most reckless and indiscipline president Ugandans have ever had.

E.g., he accused Obote of using 5 vehicles in his Presidential Motorcade. But how many does Mr. M7 now have?

Average 40 wherever his goes, including: a mobile hospital, toilet and a bullion van . As a result Mr. M7 is the number 1, worse traffic jam and motorists suffering causer in Kampala.
Report to administrator
0 #6 Lakwena 2019-01-09 09:54
In other words, the list is annoying. The guy is heartless.

Because of his dehumanizing greed and busybody; like an infant, Mr. M7 is restless, miserable soul, who wants to be everywhere, e.g., in the 2 State Houses at the same time.

Why can't he stay at Entebbe and let people, Foreign dignitaries and/VIPs go to him at Entebbe where there is space?
Report to administrator
0 #7 Lakwena 2019-01-09 10:17
Quoting kabayekka:

Unless this very poor African country understands that China is an International lender within the World Bank Group so that there is hope to stop cash outflow from the money making projects to pay international expensive debts.

Kabayekka, China is the most cunning, discrete and vicious predatory lender that Africans will live to regret.

In other words, according to international law, agreements and relations, at this rate, Ugandans will lose their shirts and skirts to Chinese; when Mr. M7 and Matia Kasija have long gone.
Report to administrator
+1 #8 Kimberly musisi 2019-01-09 10:49
We are in deep crap fellow citizens, a debt of $ 1.6 billion is no simple matter, yet not a single drop of oil has started to flow to quickly pay off the debt. In the meantime the Chinese are busy unashamedly exploiting other resources like dredging up our rivers, lakes etc of all the sand, in the process destroying the environment.

All the fishing on our lakes is exclusively for the privileged Chinese so called "investors" local fishermen are literally shot out of the water. We are stuck with the debts beyond our lifetime possibly.
Report to administrator
+1 #9 Mubiru 2019-01-09 19:24
When the grandchildren will be suffering the stupidity of handing Uganda to the Chinese exploiters disguised as investors, the Kasaija of this world will be already gone from the face of the earth.

Their gullibility in selling the country to the Chinese in the name of "investors" is next to treason.

The British Daily Mail of 28/12/18 reported that Donald Trump ordered the banning of American companies from using telecom. equipments made by Chinese companies -Huawei and ZTE which they can use for spying or sabotage.

Britain has banned ZTE and has yet to decide on Huawei. The gullible Africans are just dancing to the Chinese "tune" of believing that the Chinese are safe with Uganda.

Some of us who see beyond our noses are .worried by the current news that for the first time ever the Chinese population has decreased.

Why? Because thousands of Chinese have emigrated in doves to many African countries like Uganda in the name of "investors" and Kaisaja and group just get excited.
Report to administrator